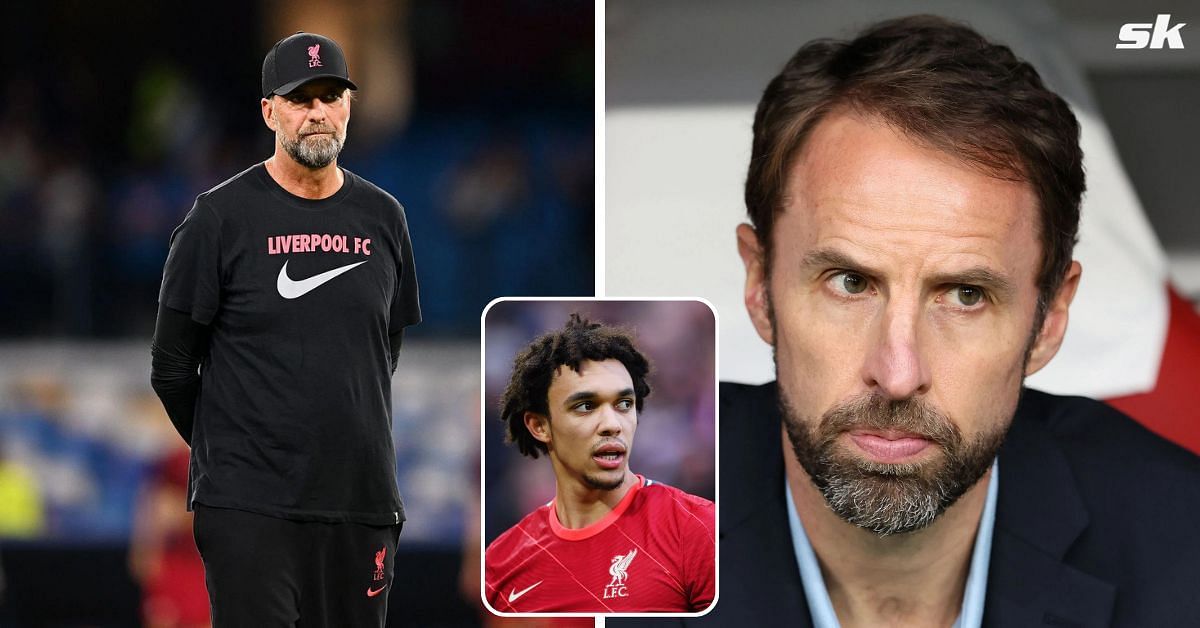 Liverpool manager Jurgen Klopp has made an honest admission about Trent Alexander-Arnold missing out on action with England in the UEFA Nations League.

Alexander-Arnold made Gareth Southgate’s provisional 28-man squad for the Three Lions’ encounters with Italy and Germany.

However, the right-back played no part, not even making the squad for the 3-3 draw with Die Mannschaft on September 26.

There has been debate over Alexander-Arnold’s exclusion with just a month until the 2022 FIFA World Cup kicks off in Qatar.

Klopp was holding his pre-match presser ahead of Liverpool’s clash with Brighton & Hove Albion on October 1 when he was asked about the right-back’s situation.

The German gave an irritated response (via Liverpool Echo):

“Do we really want to open this box? You are English journalists and we cannot discuss selections until the World Cup starts. This is why you make massive things of this.”

“My honest opinion would create headlines. You want that? It might help Germany but it wouldn’t help England. I have a lot of things to say but I don’t think it makes sense.”

Klopp has defended his player amid criticisms over his defensive capabilities:

“We are fine here, it’s completely different. I see Trent differently, that’s clear. People talk about him not being a good defender, that’s not true, he doesn’t always defend good, that’s true.”

Klopp revealed that he would pick Alexander-Arnold if he were England manager:

“He’s 23. We’re working on it. Whatever team I would have at the moment, I would pick Trent. He is exceptional. England are blessed with players in this position. Reece James can play 3 at the back, did that well for Chelsea.

“It’s Gareth’s decision. He made it. I see it different. Doesn’t mean right/wrong.”

Alexander-Arnold had a remarkable 2021-22 campaign, in which he managed 19 assists and two goals in 47 appearances.

However, it has been a struggle for the right-back this season which has coincided with the Reds’ dissapointing start.

The English defender has made nine appearances, scoring two goals, but has been called out for his defending.

He was seen letting his man go for one goal in the Anfield side’s 4-1 thrashing at Napoli in the Champions League on September 7.

“Trent Alexander-Arnold dropped below his usual high standards against Manchester United and Napoli and faces a challenge to be picked for the World Cup. There are defensive lessons he has to learn.” #lfc [mail]

Danny Murphy: “Trent Alexander-Arnold dropped below his usual high standards against Manchester United and Napoli and faces a challenge to be picked for the World Cup. There are defensive lessons he has to learn.” #lfc [mail] https://t.co/axzEfKJtiu

Alexander-Arnold has the chance to impress ahead of the World Cup this Saturday against Brighton and silence his critics.

Liverpool are in vital need of a win as they sit eighth in the table having won just two of their opening six league fixtures.