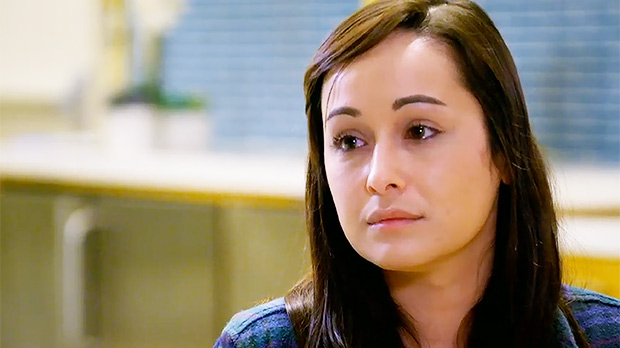 Morgan sit down with her friend, Debrato discuss the latest drama with Binh. “I found out that he never stopped going to Justin with our issues. They talk on a daily basis, and how do I trust someone who has now broken my trust daily,” Morgan says in this EXCLUSIVE preview of the September 7 episode of Married At FirstSight.

Morgan is friends with Alexis, Justin’s wife, so she’s heard everything Binh has been saying about her. Alexis told Morgan that “Binh is making you out to be is the complete opposite” of who she really is.

Morgan reveals that she went to her apartment a couple of days ago, but she didn’t want to address the current drama in full at that time. However, she tells Debra that she needed to let Binh know that she knows about what he’s done. “Alexis told me everything, by the way,” Morgan told Binh at the apartment.

After that, Binh tried to go after her. Morgan just kept walking. Later, Alexis messaged her and said that Binh was sitting next to her. Binh FaceTimed Morgan, and that’s when Morgan went off.

“I’ve never been that angry before,” Morgan admits to Debra. She didn’t hold back on Binh. She calls the whole situation “embarrassing.”

Morgan begins to cry in front of Debra. Debra knows how much Morgan wanted to make this work. “I feel you closing the door,” Debra says and Morgan agrees.

Jackson White: 5 Things To Know About The Breakout Star Of ‘Tell Me Lies’

The synopsis for the September 7 episode reads: “As they celebrate their one-month anniversaries, our couples reflect on their progress (or the lack thereof), and set their sights on the road to Decision Day. While some seek to recapture the magic they’ve lost, others struggle to foster trust, putting their future in grave jeopardy.” Married At FirstSight airs Wednesdays at 8 pm on Lifetime.