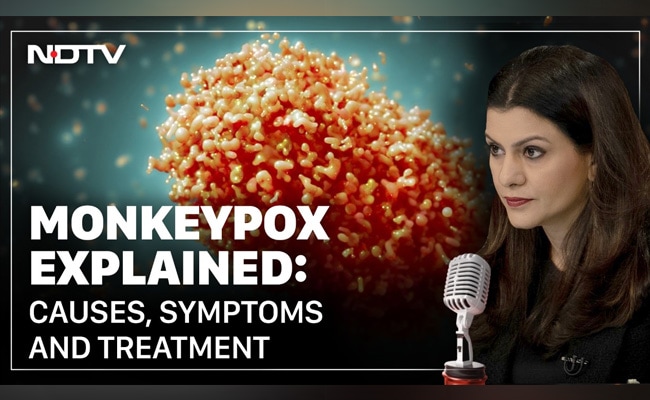 this is Hot Mic and I’m Nidhi Razdan. The world is still reeling from Covid and now we have a new health crisis to deal with. Over the weekend, the World Health Organization or the WHO, declared Monkeypox a global health emergency. They say more than 16,000 cases have been confirmed so far in 75 countries. The last global health emergency was Covid and here we are. There are four known Monkeypox cases in India. Several states have now been deploying strict screening protocols and the center has asked officials to remain on alert. According to the WHO, Monkeypox is a virus transmitted from humans to animals with symptoms very similar to those seen in the past in smallpox patients.

Although, it is clinically less severe.Thankfully, fatality rates in this are low. The name ‘Monkeypox’ originates from the initial of the virus in monkeys in a Danish laboratory in 1958. The first human case was identified in a child in the Democratic Republic of Congo in 1970. The Monkeypox virus is transmitted from one person to another by very close contact with lesions, bodily fluids, respiratory droplets and contaminated materials such as bedding.

The incubation period of Monkeypox is usually from 6 to 13 days, but can range from 5 to 21 days. The WHO goes on to say that uncertainty remains on the natural history of the Monkeypox virus, and further studies are needed to identify the exact reservoirs and how virus circulation is maintained in nature. So what are the symptoms? Now, according to the US Center for Disease Control and Prevention, the main symptoms are a fever headache, muscle aches, backache, swollen lymph nodes, chills, exhaustion, and importantly, a rash that can look like pimples or blisters that appear on the face, inside the mouth and on other parts of the body, like your hands, your feet, your chest, etc.

The rash goes through different stages before it heals completely. The illness typically lasts anywhere from two to four weeks. Sometimes people get a rash first, followed by other symptoms. Others only experience a rash. Now Monkeypox spreads in different ways.It can spread from person to person, as we said, through direct contact with the rash itself, the scabs, the respiratory secretions during prolonged face to face contact or during intimate physical contact like kissing, cuddling or sex . Now, touching items such as clothing or linens that previously touched the infectious rash or body fluids can also infect you. And pregnant women can spread the virus to the fetus also, through the placenta. This is what experts are saying. It’s also possible for people to get Monkeypox from infected animals, either by being bitten by them or scratched by them, or by preparing or eating meat or using products from an infected animal. Now, Monkeypox is not actually considered a sexually transmitted disease, but most people who have gotten it have been gay or bisexual men.

However, as the WHO points out, the risk of Monkeypox is not limited to men who have sex with men. Anyone who has close contact with someone who is infectious is at risk, and stigmatizing people because of a disease is never okay. Anyone can get or pass on Monkeypox regardless of their sexuality.

Speaking to NDTV, the chief scientist at the World Health Organization, Dr Soumya Swaminathan has said, that the outbreak of Monkeypox has been a wake up call and explained that since 1980 or so smallpox vaccination programs have been stopped, indicating that that may have helped the virus to steal a march on the world. The WHO website says that vaccines used during the smallpox eradication program also provide protection against Monkeypox. But newer vaccines have been developed as well, of which one has been approved for the prevention of Monkeypox Dr Swaminathan, however, indicated that using the smallpox vaccine for Monkeypox may be useful, although more laboratory data is required. She said today smallpox vaccines are second and third generation, but there are limited doses and several countries have been stockpiling these vaccines in case that is a smallpox outbreak. There is a Denmark-based company called Bavarian Nordic that has developed a vaccine for Monkeypox, but there isn’t any efficacy data on that yet. Dr Soumya Swaminathan also said that Indian pharma companies like the Serum Institute of India can have a big role in bottling, marketing and distributing existing smallpox vaccines, if they were widely available. So what happens next in the fight against Monkeypox? Watch this space.