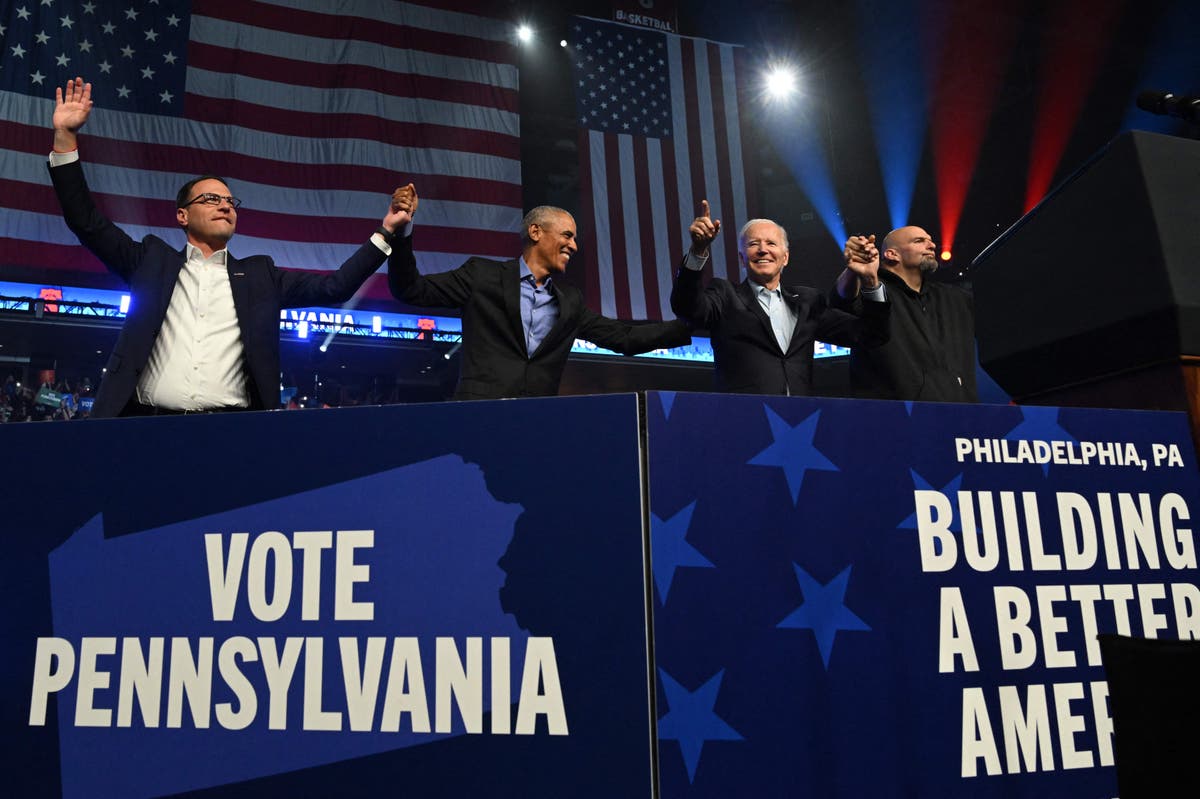 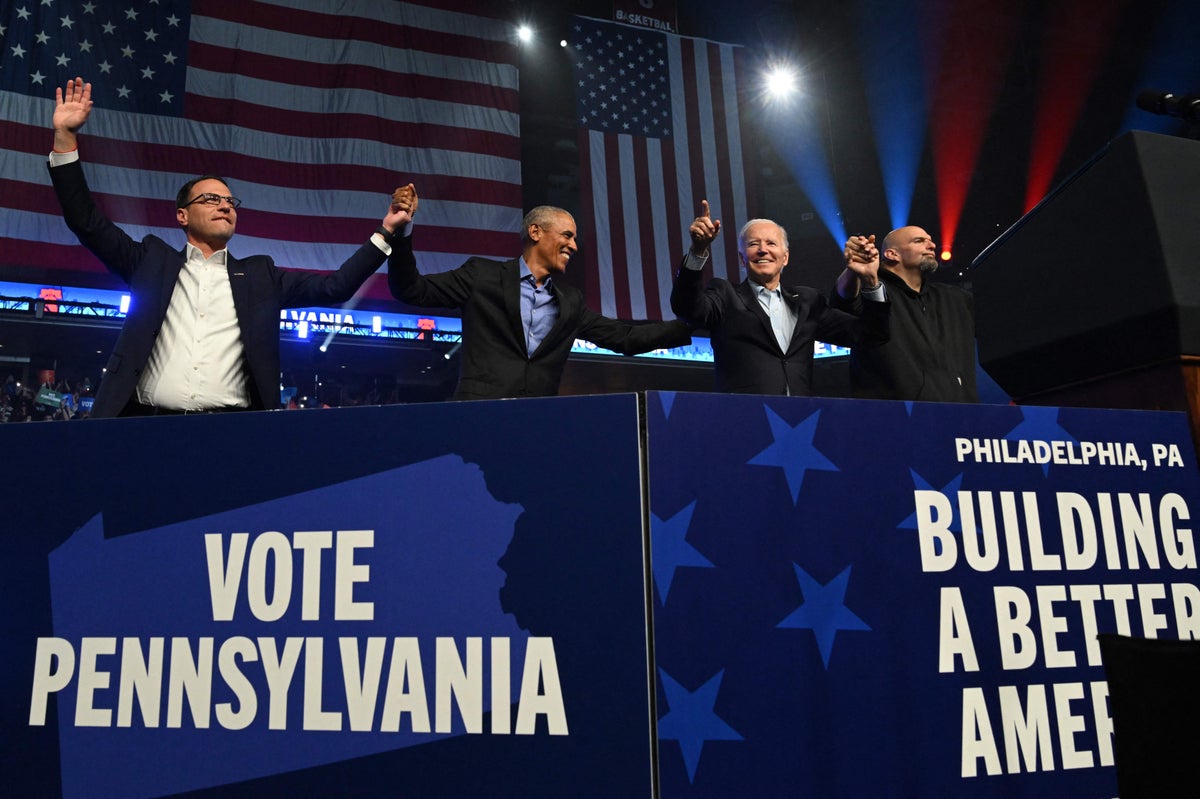 What are the US midterm elections and when are they due?

With Election Day looming, senior Democrats spent the weekend crisscrossing the nation in an effort to shore up the votes of candidates in swing districts and to thwart unexpected threats in once-safe places.

President Joe Biden has campaigned in Albuquerque, San Diego, and Joliet, Illinois, before joining former President Barack Obama in Philadelphia to get out the vote for Pennsylvania Senate candidate John Fetterman. Mr Obama and Mr Fetterman held an event in Pittsburgh earlier on Saturday and Bernie Sanders also campaigned in the state.

Former president Donald Trump, meanwhile, was in Pennsylvania for a rally Saturday with Dr Mehmet Oz and Doug Mastriano, before heading to Florida where he and Governor Ron DeSantis held separate rallies adding further fuel to speculation of a rivalry between the two. On Saturday night Mr Trump nicknamed him “Ron DeSanctimonius” during a speech.

Early vote numbers, meanwhile, are surging and have just passed the total reached in the 2018 midterm cycle, according to The Washington Post. The eventual total will be much higher as more votes continue to come in on Monday and Tuesday.

A possible reason for the arises in early voting is the Covid-19 pandemic, which saw the practice expanded in many states.

Twitter to delay rollout of paid blue checkmarks until after midterms, report says

Twitter will delay the rollout of their new system of verification check marks to subscribers of its $7.99 per month subscription service until after the US midterm elections on Tuesday, according to report by The New York Times.

The teams cites an internal post and two people with knowledge of the decision. The Independent has contacted Twitter for confirmation of the report.

Obama warns ‘truth is on the ballot’ in midterms

Former president Barack Obama has warned “democracy itself is at stake” in the upcoming US midterm elections.

Mr Obama gave an impassioned speech from Philadelphia where he was campaigning for Democratic candidates John Fetterman and Josh Shapiro on Saturday (5 November).

“Truth and facts, logic and reason, and basic decency are on the ballot. Democracy itself is on the ballot. The stakes are high” he told a cheering crowd.

Mr Obama hit out at Mr Fetterman’s GOP rival Dr. Mehmet Oz, who previously claimed “local political leaders” should be involved in a women’s decision to have an abortion.

“Women should be able to control what happens to their own bodies” Mr Obama said.

Obama warns ‘truth is on the ballot’ in upcoming midterms

Former president Barack Obama has warned “democracy itself is at stake” in the upcoming US midterm elections. Mr Obama gave an impassioned speech from Philadelphia where he was campaigning for Democratic candidates John Fetterman and Josh Shapiro on Saturday (5 November). “Truth and facts, logic and reason, and basic decency are on the ballot. Democracy itself is on the ballot. The stakes are high” he told a cheering crowd. Mr Obama hit out at Mr Fetterman’s GOP rival Dr. Mehmet Oz, who previously claimed “local political leaders” should be involved in a women’s decision to have an abortion. “Women should be able to control what happens to their own bodies” Mr Obama said.

Mr Trump mockingly referred to his onetime ally, who won the Sunshine State’s 2018 gubernatorial election after earning the then-president’s endorsement, as “Ron DeSanctimonious” while discussing his standing in the polls during a rally in Latrobe, Pennsylvania.

While Democrats and Republicans will no doubt turn out to the polls in high numbers, some independent voters may not be aware that they can vote in the midterms.

The reason for the confusion may come from the fact that many states do not allow independents to vote in primary elections, where parties choose who will represent them in races decided in the midterms and general elections.

Mr Trump mentioned Ms Pelosi while speaking at a rally in Miami for Republican Senator Marco Rubio of Florida.

Mr Trump urged his supporters in his opening remarks to vote for incumbent Senator Marco Rubio — as well as Florida Gov Ron DeSantis, whom he had derided just a day earlier.

Allies of Florida Gov Ron DeSantis are fuming after Donald Trump finally took the gloves off and hit his likely 2024 rival with just days to go before the midterms.

At a Saturday night rally, Mr Trump referred to the governor as “Ron DeSanctimonious” during his remarks before thousands of supporters.

Veteran CBS News political correspondent Robert Costa reported on Sunday: “Several DeSantis allies, some also close to Trump, texted last night and this morning, unprompted, expressing private anger and even disgust w/ Trump for his remarks about the Florida governor. Say they’re telling DeS. and his family, and his top aids, to still move [towards a] ’24 bid.”

Manchin blasts Biden ahead of midterms

Joe Manchin, the centrist holdout senator whose vote has vexed President Joe Biden for months on key issues, is once again turning his fire on his party with just days to go until the election.

Mr Manchin’s latest ire seems to have been triggered by comments made by Mr Biden in California in support of the CHIPS Act, where the president appeared to declare that the US was on a path towards further shutting down fossil fuel plants and replacing them with green energy sources.

“Comments like these are the reason the American people are losing trust in President Biden and instead believe he does not understand the need to have an all in energy policy that would keep our nation totally energy independent and secure. It seems his positions do change depending on the audience and the politics of the day. Politicizing our nation’s energy policies would only bring higher prices and more pain to the American people,” Mr Manchin said, calling Mr Biden’s remarks “outrageous and divorced from reality”.

In what could be a preview of 2024, Donald Trump took a swipe at former ally Ron DeSantis during a Saturday evening rally in Ohio, where the ex-president appeared to stump for JD Vance.

Dubbing him “Ron DeSanctimonious”, Mr Trump issued his first very public jab at the Florida governor who is widely considered to be the most likely main rival that the former president will face if he seeks the GOP’s nomination in the upcoming presidential election.

But that little remark is already coming back to bite him.

“DeSantis is an extremely effective conservative governor who has had real policy wins and real cultural wins. Trump is not going to be able to take this one down with a dumb nickname. He better have more than that up his sleeve,” wrote conservative. blogger Matt Walsh. “Also, nice job launching your public attack against the most popular conservative governor in America three days before the midterms”.

The number of early votes cast in the 2022 midterm election has surpassed the overall total from 2018, the last time Americans met to decide the fate of Congress while a presidential race was not underway.

There’s possible reasons for this, including expansions of early voting procedures under Covid-19 in many states. But some on the left are hoping a surge of voters after the dobbs decision earlier this year will boost their party’s prospects this week.