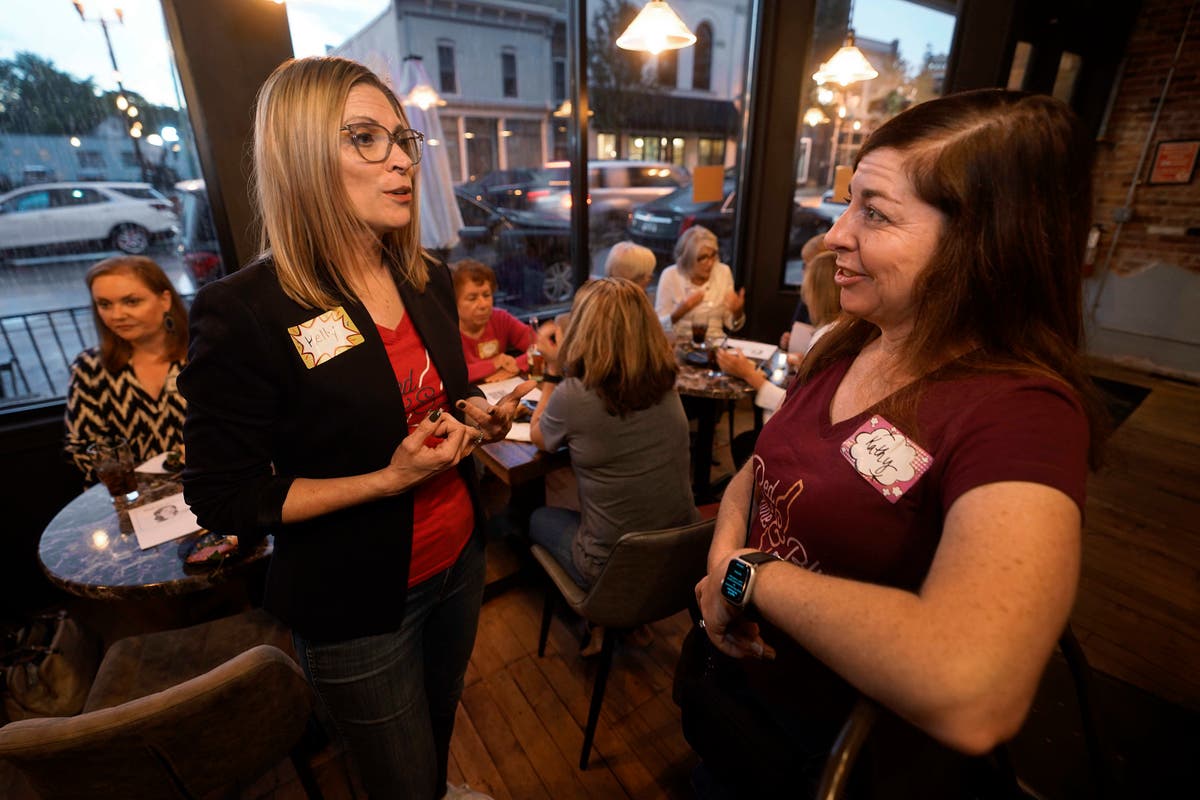 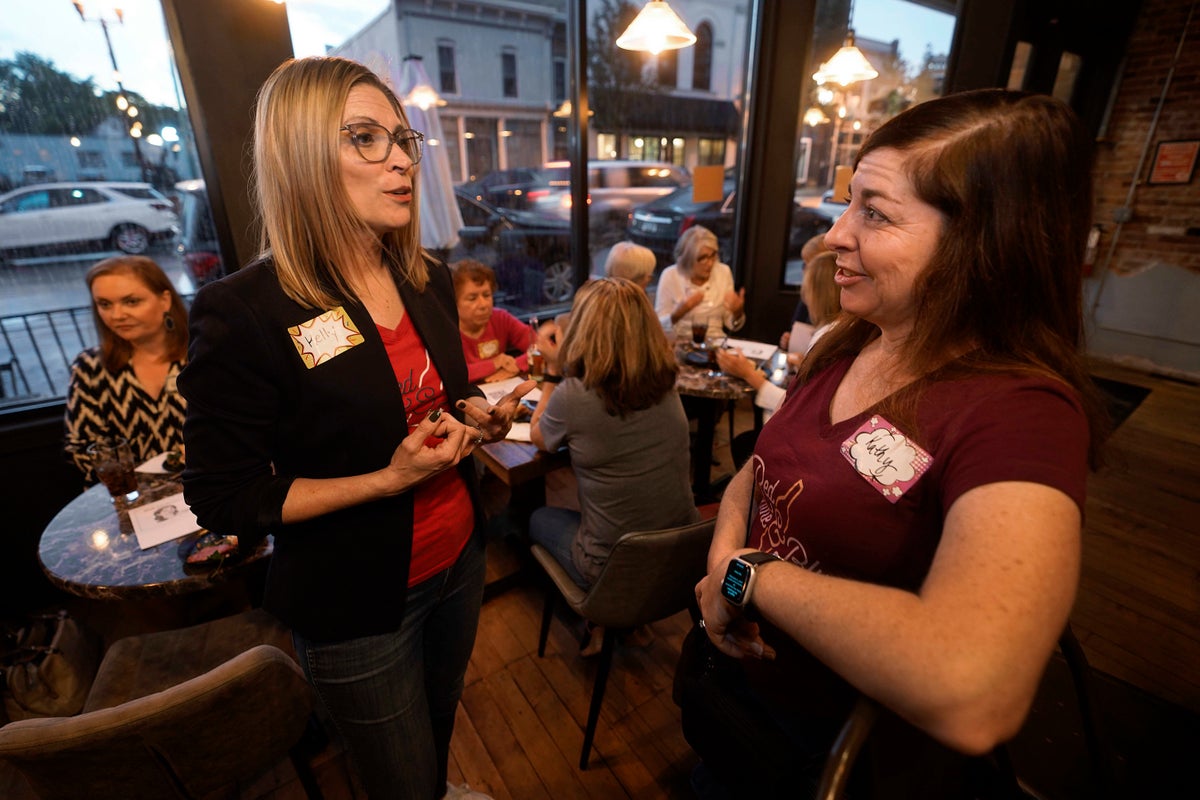 At a wine bar in suburban Detroit, about a dozen women strategized about how to preserve the right to abortion in their state.

This was not a typical political event; there were no microphones, no literature to hand out and few who would consider themselves activists. Among them was a mother of four whose only previous political experience was pushing for later school start times, a busy medical student and a retired teacher who, at 75, has never felt comfortable knocking on doors or cold calling for a candidate.

“But I feel strongly about abortion,” said Mary Ann Messano-Gadula. “Women should be able to take care of their own bodies.”

Messano-Gadula, who attended the late September “Vino the Vote” event with two friends, described herself as the most shy of the bunch. But she said she planned to do what organizers asked of attendees — post some Facebook messages and text some friends to try to get them to support an amendment to the state constitution guaranteeing abortion rights.

Across Michigan this year, similar, more intimate events are playing out alongside the larger, traditional get-out-the-vote efforts, with major stakes for both abortion rights and the candidates — mostly Democrats — who support them.

Michigan is one of a handful of places where abortion rights will be on the ballot in November, after the US Supreme Court overturned Roe v. Wade in June and left the issue to states to decide. A ban approved in 1931 was suspended, then struck down by state court rulings, but it is no guarantee that the procedure won’t one day be outlawed.

That has mobilized people in Michigan, as it has done in previous elections this cycle, including in Kansas and New York. And it could have major implications beyond the state.

Michigan is one of the country’s most competitive presidential battlegrounds. It was also among the states where former President Donald Trump and his allies dele tried to overturn his 2020 loss dele to Joe Biden, falsely claiming the election was stolen. Voters this fall will also decide statewide offices, including governor and secretary of state, who will be in place for the 2024 election.

The race for governor already has centered around abortion. Democratic Gov. Gretchen Whitmer filed a lawsuit prior to the US Supreme Court ruling seeking to overturn the 1931 ban and said she “will continue using every tool in my toolbox to fight like hell for women and health care providers.” Republican Tudor Dixon, who opposes abortion except to save the life of the mother, has criticized Whitmer for supporting abortion without limits, and suggested voter who support the constitutional amendment could vote in favor of it and still support her campaign for governor.

The issue has already generated intense interest among voters and pushback from Republicans and abortion opponents. Reproductive Freedom for All, the coalition supporting the abortion-rights amendment, collected over 750,000 signatures on petitions to put the question on the ballot — more than any other ballot initiative in Michigan history.

Opponents turned out in force for a meeting of the Board of State Canvassers, the once-staid panel that decides what questions and candidates qualify for the ballot. With anti-abortion protesters outside the building audible inside the hearing room, the board split along party lines, with two Republicans voting no and two Democrats voting yes. That meant the measure didn’t qualify for the ballot, but Reproductive Freedom for All appealed to the Michigan Supreme Court, where justices — a majority of whom they were appointed by Democrats — ordered it to be put on.

Red, Wine & Blue, the organization that held the wine bar gathering, is among the members of the RFFA coalition in Michigan. Their strategy is to ask suburban women — a key swing demographic in recent elections — to reach out to and talk with friends, family members and other acquaintances and ask them to vote.

The model, known as relational organizing, was used successfully by candidates such as Sen. Jon Ossoff of Georgia, who won a runoff election to help Democrats win control of the US Senate, and Pete Buttigieg, who went from little-known mayor of South Bend, Indiana, to a top candidate for the party’s 2020 presidential nomination.

Greta Carnes, who led the effort for Buttigieg’s campaign, said it is particularly effective in turning out suburban women and on the often sensitive and personal issue of abortion. The approach is also more efficient and effective, because people can contact dozens of people in a matter of minutes via text, and a voter receiving a message from someone they know is more likely to read and consider, rather than delete it.

“Especially on an issue like abortion, we can’t just have activists” knocking on doors, Carnes said.

Lakshmi Vadlamudi, a medical student from Franklin, Michigan, saw firsthand the power of using her personal network when she helped gather signatures to put the abortion question on the ballot this summer. She told a few friends she would be in a parking lot one day collecting signatures, and word spread like wildfire, she said.

Vadlamudi started getting text messages from people wanting her to come to their house so they could sign. Her dela Indian “aunties” — women with whom she is close but not related — wanted to circulate their own petitions. Some had family members in the medical profession and feared legal repercussions of performing an abortion if the 1931 ban takes effect, while others worried for their daughters or granddaughters. They ended up with 20 filled petitions.

“We got as many as we could get our hands on,” Vadlamudi recalled. “People kept asking,” she said, and interest in the issue hasn’t stopped.

Red, Wine & Blue’s Michigan group is aiming to reach 157,000 voters in the state through these “relational” contacts, according to Katie Paris, the organization’s national director. The group’s leader in Michigan, Kelly Dillaha, said they are recruiting 5,000 women to contact their networks and report back to the group on their progress via an app.

Kathy Nitz, a mother of four from Rochester Hills, started working with Red, Wine & Blue after volunteering at her kids’ schools, leading the PTA and spearheading an effort to start schools later in the morning. Those issues always felt like “safe” topics, she said. Talking about abortion, on the other hand, was a bit like saying the word “Voldemort” — the name that characters in the “Harry Potter” books fear would bring great danger if uttered.

But Nitz has grown more comfortable with the topic, even discussing the nuances with her very Catholic and anti-abortion mother. And she believes these small conversations among women like herself could add up.

“What I’ve come to realize as a suburban woman and mother myself is that we’re undervalued. We are underappreciated and under estimated, but we’re also strong,” Nitz said. “We build communities, we make networks. That’s what we’ve always done.”

For AP’s full coverage of abortion, go to https://apnews.com/hub/abortion