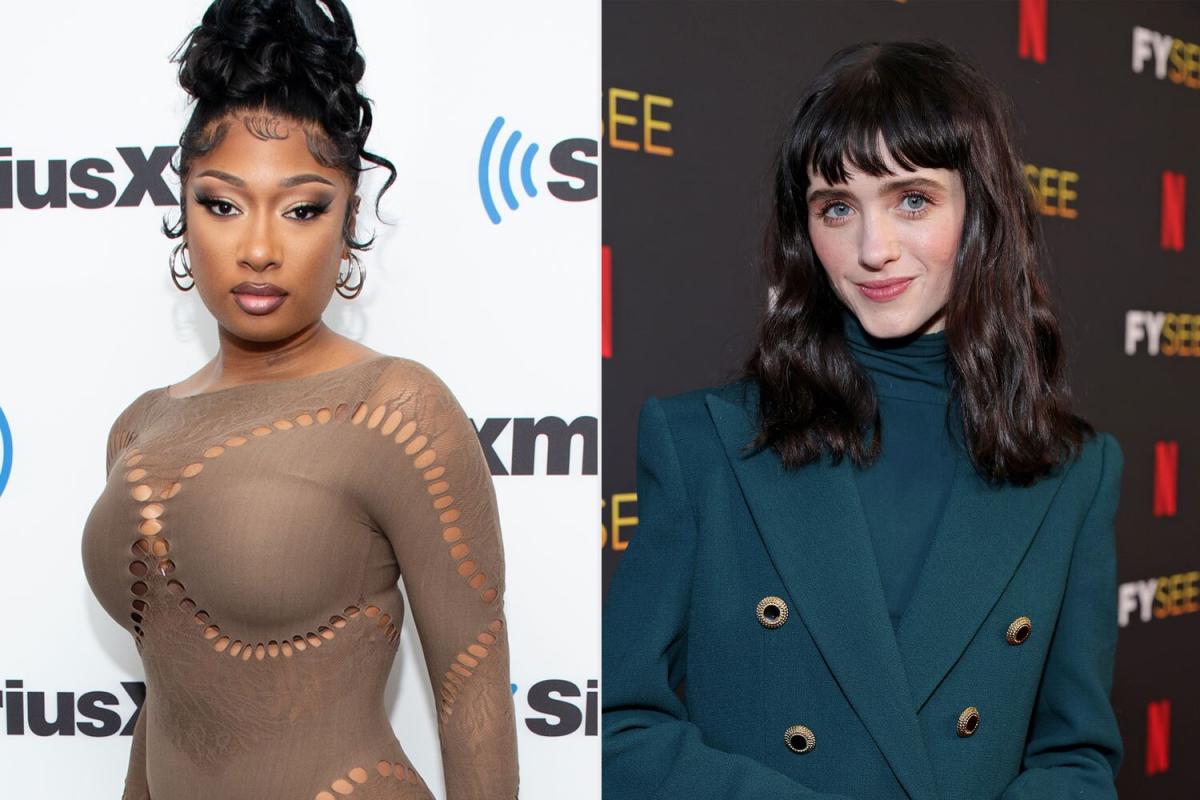 The Grammy Award winner, 27, grilled Natalia Dyer about her character Nancy rejecting Joe Keery’s Steve and whether she’s “Team Jancy” or “Team Stancy” while co-hosting The Tonight Show this week with Jimmy Fallon.

“I’m Team Stancy. I want Steve,” she declared on Thursday’s episode. “Let’s talk about it though. Okay, so boom. At first, you liked Steve. You were into Steve, and then you just kind of like dumped him. No caution, he didn’t know what was happening. Poor Steve.”

“Y’all keep throwing the kids on him to babysit. He keeps saving y’all life. All he do is save y’all life. He was beating everybody up, and you’re like, ‘Oh man, I’m going to Jonathan. Sorry,'” Megan added.

Dyer, 27, who has been romantically linked to Jonathan actor Charlie Heaton since the first season premiered in 2016, responded with a laugh. “I do feel bad. Honestly, I just think the way Jonathan and Nancy happened, I was like, she does not always make the most morally right decisions all the time. But she that’s human,” she said.

“She’s a hot girl,” Megan said, before adding, “Wait, wait, wait. ‘Cause we didn’t even get to the juicy part. So then, in this last season, you were flirting with Steve. So like, what’s it really giving, Nancy? … I feel like you like Steve still.”

“You know, I have options, I guess,” Dyer said as applause rang out from the live audience.

Fallon, 47, made the assumption that Nancy is “probably not even thinking about a love triangle” with everything else going on, to which Dyer responded, “That’s really how I feel. Everyone’s [says] ‘Stancy, Jancy’ but I think she probably just needs a little ‘me’ time after all of it. Maybe a little therapy even. Like, they’re still in high school, it’s pretty intense.”

“So much to think about,” Meg added. “Jonathan is boring. She’s so smart, she’s so pretty. She’s got things to do. Yes, we love Nancy.”

Heaton, 28, previously told PEOPLE about navigating their characters’ relationship versus their offscreen dynamic when season 3 premiered in 2019. “Obviously, we have different relationships, but it’s like we both care about the character relationships as well,” he said.

RELATED VIDEO: Charlie Heaton and Natalia Dyer ‘Confuse’ Their Characters’ Relationship with Their Own

“We read the scripts and we come home, and it’s like, we want them to have moments … but sometimes, I think we get it confused with between our own and the characters,” Heaton said as Dyer joked, “Are we fighting, or…?”

season 4 of Stranger Things is now streaming on Netflix.