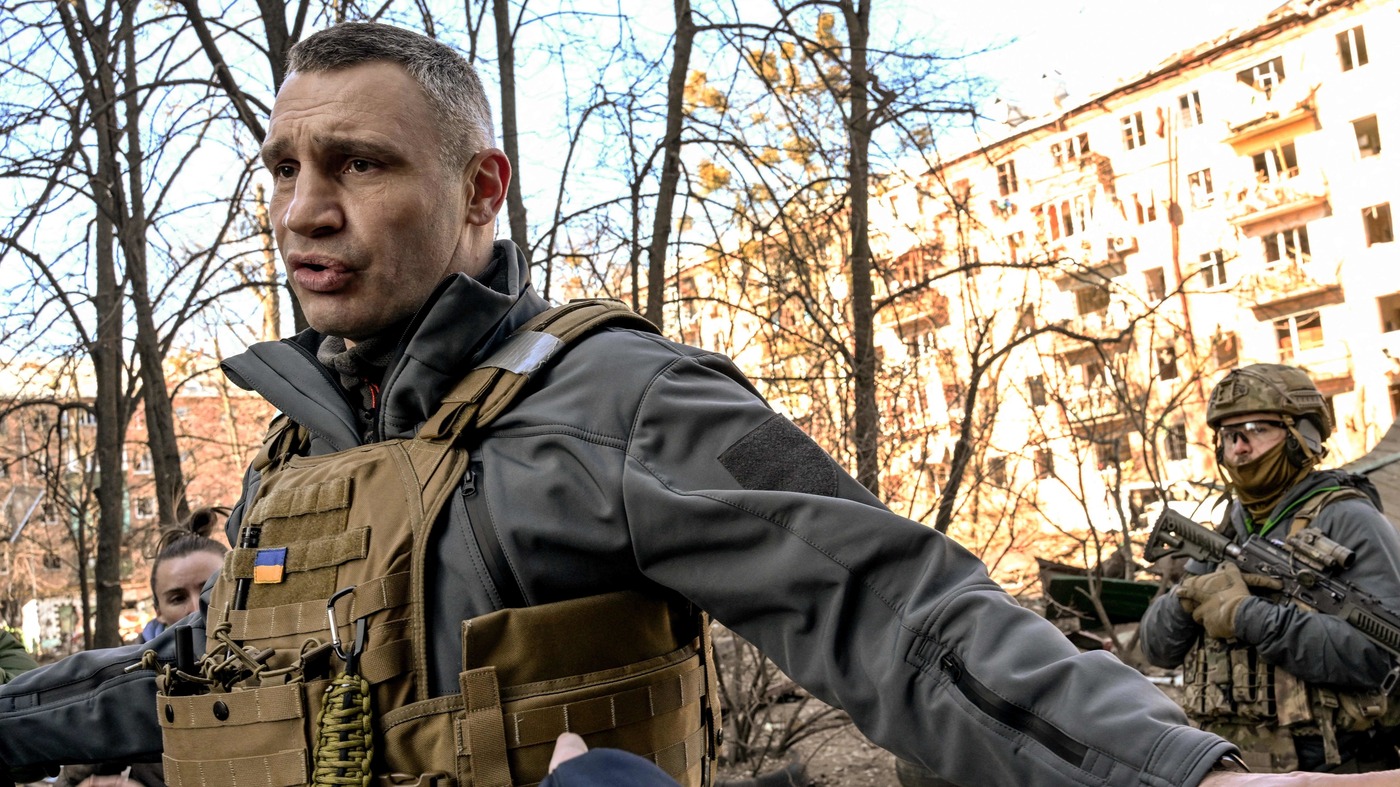 Kyiv Mayor Vitali Klitschko speaks in March in front of an apartment building that was shelled by Russian forces. Klitschko, a former world heavyweight boxing champion, has been mayor of Kyiv since 2014.

Kyiv Mayor Vitali Klitschko speaks in March in front of an apartment building that was shelled by Russian forces. Klitschko, a former world heavyweight boxing champion, has been mayor of Kyiv since 2014.

KYIV, Ukraine — If you want to challenge that old expression “you can’t fight city hall,” you should probably pick someplace besides Ukraine’s capital. That’s because the mayor’s previous job title was heavyweight champion of the world.

Now, he’s fighting the Russians. Klitschko is quick to the scene when Russian airstrikes slam into the capital.

“They killed children, women, civilians, for what reason?” Klitschko said as he arrived at an apartment building that was attacked in March. “Where’s the military target? Is this building a military target?”

The Russian invasion in February has transformed Ukraine’s President Volodymyr Zelenskyy from a leader with sagging popularity into one of the world’s most famous political figures. Yet before the war, Klitschko was better known globally, at least to boxing fans.

The Russians reached the outskirts of the capital early in the war and had just retreated when Klitschko spoke to NPR in April.

“Kyiv is the largest city in Eastern Europe. Right now, we guess half of the population (of 3.5 million) has already left,” Klitschko said. “The city’s changed totally. In the springtime, this city has energy. And right now, the city is almost dead.”

Now the capital is more relaxed

The war is still raging in eastern and southern Ukraine. But in the capital, many residents who initially fled have come back and the city has in many ways regained a sense of normalcy. There are still soldiers in the streets, checkpoints on the edge of the city, and frequent air raid sirens. But the streets are full of cars and pedestrians, shops and restaurants are open, and the day-to-day atmosphere is generally relaxed.

Even when the Russians were nearby, Klitschko never stopped working out of City Hall, a massive stone building in the center of Kyiv, surrounded by sandbags. He said in a recent interview with The Sunday Times that he’s left the city just twice since the war began.

World heavyweight champion Vitali Klitschko (right) celebrates his victory over Poland’s Tomasz Adamek in Poland in 2011. Klitschko’s brother, Wladimir Klitschko (left), was also a world champion as the two brothers dominated the heavyweight ranks for more than a decade. However, they kept a promise to their mother and never fought each other.

World heavyweight champion Vitali Klitschko (right) celebrates his victory over Poland’s Tomasz Adamek in Poland in 2011. Klitschko’s brother, Wladimir Klitschko (left), was also a world champion as the two brothers dominated the heavyweight ranks for more than a decade. However, they kept a promise to their mother and never fought each other.

At age 51, Klitschko stands 6-foot-7 and still looks to be around his fighting weight of 250. When he retired nearly a decade ago, he’d won 45 professional bouts — 41 by knockout — and lost only twice. His nickname? Dr. Ironfist

In politics, he did lose his first bid for mayor. But he won the post in 2014 and was easily reelected in 2020. He generally gets good marks from citizens.

Belov gives toy car rides to children at a park that Klitschko upgraded. The park — one of several renovated by the mayor — now has an elevated walkway with a commanding view overlooking the Dnipro River, which bisects the city.

“These are beautiful parks. I think they’re the new calling card of the city,” Belov said. “These are historical places and they’ve been modernized.”

Still, not everyone is a fan of the mayor.

“I think that he is essentially a sportsman and he should stick to sports,” said Anya Hovenko, who was pushing her child in a stroller through the park.
“He is definitely not someone who is adept at governing. I’m not very sure that he’s very good at his job.”

Kyiv Mayor Vitali Klitschko speaks to journalists in April at the demolition of a Soviet-era monument dedicated to Russian-Ukrainian friendship.

Kyiv Mayor Vitali Klitschko speaks to journalists in April at the demolition of a Soviet-era monument dedicated to Russian-Ukrainian friendship.

Ukraine is poor compared to most of Europe. But there were signs of growing wealth in Kyiv — with Klitschko presiding over substantial development — until Russia invaded in February.

The city is now a mix of sleek glass towers that have risen in recent years, as well as stodgy apartment blocks from the Soviet era, and grand, ornate architectural gems that date back to tsarist-era Russia.

Before the war, Klitschko did face critics who said he favored wealthy developers over ordinary residents.

“His reputation is someone who has greatly developed the city, but mostly private development,” said Liubomyr Mysiv of the group Rating, a private polling organization. Klitschko, he said, is seen as a mayor who has supported “building condominiums and shopping malls, as opposed to the public services that employ people.”

Also, Klitschko supported President Volodymyr Zelenskyy’s opponent in the presidential election in 2019. But the war has unified Ukrainians and pushed most internal political differences to the side, at least for now.

Brothers made a promise to their mother

One of Klitschko’s strongest supporters is his younger brother, Wladimir, who also held multiple world heavyweight titles, from 2006 to 2015. At times, both Klitschko brothers held title belts from rival boxing associations, an unprecedented domination of the heavyweight ranks by a pair of brothers.

Yet they never settled it in the ring, keeping a promise to their mother that they would never pummel each other the way they hammered most everyone else.

Their mother is Russian and their father is Ukrainian. Such marriages were quite common in the Soviet era. In addition, their father was a general in the Soviet air force. The brothers grew up on Soviet military bases in the 1970s and ’80s.

In a recent interview with Britain’s Sunday Times, Klitschko said his family was deeply loyal to the Soviet Union and viewed the US as an enemy. But as his boxing career was taking off, he traveled to the US in the late 1980s.

“I came back and told my father, ‘I’ve been to Florida. I visited Disney World, so many places.’ I told him, ‘Sorry, everything you’ve heard about the United States is (nonsense). It’s a great country. They are great people,'” he told the paper.

The Klitschko brothers say that given mixed Russian-Ukrainian heritage, they have nothing against the Russian people. But they’re full-throated opponents of President Vladimir Putin’s war against Ukraine.

Mayor Klitschko made that point, as he has done repeatedly, at a deadly missile strike in June.

“This senseless war. We have to do everything to stop this war. Because thousands and thousands of civilians die,” he said.