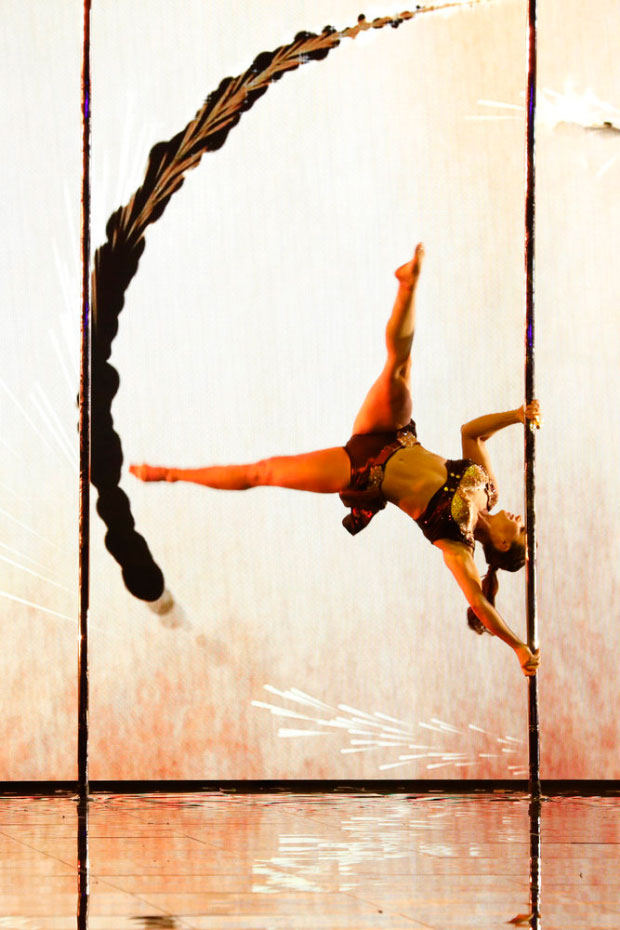 There’s only one round of qualifiers left before the America’s Got Talent season 17 finals. Singer Kristen Cruz is the first to take the stage, and she performs an incredible rendition of Miley Cyrus’ “Nothing Breaks Like A Heart.”

Simon Cowell tells Kristen that she has a “great country voice” but thinks she chose the “wrong song” tonight.” While her dela “voice dela is amazing,” he says that she was “screaming the song.” Heidi Klum totally disagree with Simon. She calls Kristen “ferocious, but I love it.” Howie Mandel’s opinion is more in line with Heidi. He likes the “rawness” in Kristen’s voice.

magician and rapper Mervant Vera you decide to take a risk with his qualifiers performance. He admits that he doesn’t even know how it will all turn out. His latest performance involves Terry Crews, the judges, and the audience. Heidi loves how mixing music and magic “separates” Mervant from the other magicians.

Simon admits that he could feel Mervant’s nervousness and “how much you really want this to work for you.” Howie calls Mervant the “magical hip hop version of Tony Robbins.”

Travis Japan you decide to sing an original song for their latest performance, and there are definitely some vocal issues with the singers. Howie even presses his red X. Suddenly, the performance takes off and gets much better. Howie explains that he pressed his red X because the singing was “really off… It seemed like a parody.”

Simon tells the group that the “song was dreadful,” but he thinks they’re “really entertaining.” Sofia Vergara admits that Travis Japan’s vocals were “a little bit bad… I don’t think tonight was your night.”

Australian dancer Max Ostler takes things to a new level with his performance to Ed Sheeran’s “Castle on the Hill.” Heidi calls Max “poetry in motion.” Simon raves that Max’s “choreography was incredible,” and this performance was “better than your first audition.”

comedian Jordan Conley, who is also America’s Wildcard, brings the laughs with his latest standup routine. Simon gives him a standing ovation. “You are just lovable,” Howie admits. Simon adds that Jordan was “brilliant” tonight.

pole dancer Kristy Sellars stuns the judges with her jaw-dropping performance. Simon calls the performance “unbelievable” and thinks Kristy has “one of the most astonishingly brilliant, creative acts we’ve seen on the live shows.” Next up is Blade 2 Bladeand they keep us on the edge of our seats.

They throw blades at a spinning wheel and even throw burning blades. They have a woman pole dancing as they throw blades. Simon says there is “no question” about this being a Vegas act. Howie points out that this is the only danger act of AGT this season. “You bring something we need,” he says.

Singer Aubrey Birchell gets a standing ovation from all the judges after her lovely performance of “Loved by You” by KIRBY. Howie thinks the song choice may have been a bit “cabaret” for the people at home, but he loves her voice. Heidi thinks the song choice showed off Aubrey’s “amazing range.” Simon acknowledges Aubrey’s “great voice.” While he notes that she “could have made it a little easier” for herself, he understands why she took a risk with this song and appreciates her decision.

Yo-yo artist Shu Takada returns to the stage, and you can’t take your eyes off him. He makes his yo-yo act a thrilling experience. “You definitely make yo-yo cool,” Sofia admits. Howie tells Shu that “we have never seen done to the level you’re doing it.”

The final performance of the night is Sofia’s Golden Buzzer act Mayyas. The Dance Group of 36 Ladies delivers one of the most astounding performances of the season. Mayyas prove they’re truly a perfect Vegas act.

Sofia runs up onto the stage to hug the ladies after the performance. Simon declares that this is not going to change their lives, this is “a performance that changes the world.” Heidi says that Mayyas is “Vegas ready.” Howie goes so far as to say that this is the “best moment I have seen in AGT history.”