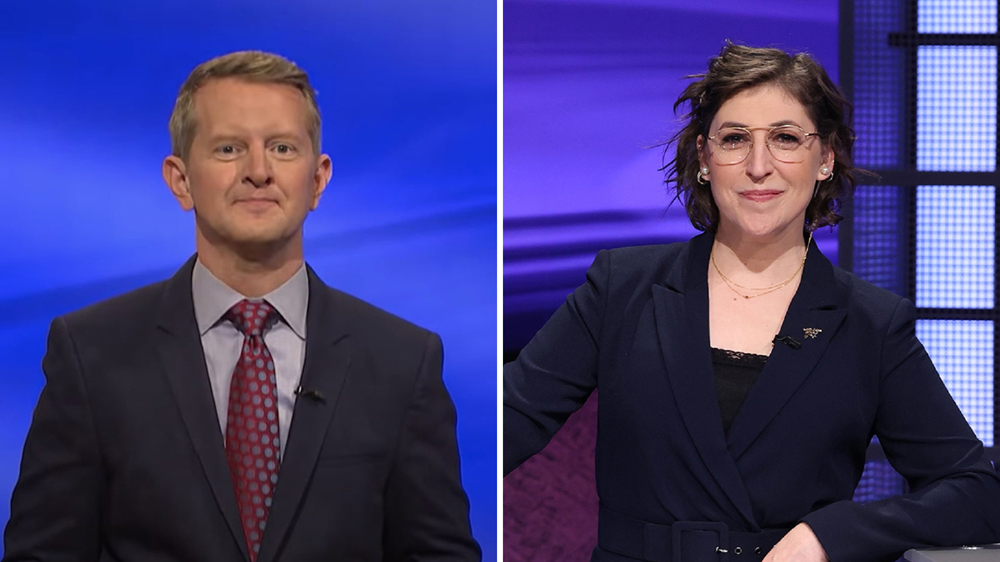 It’s official: Mayim Bialik and Ken Jennings are the permanent hosts of Jeopardy! going forward. The game show’s executive producer Michael Davies announced the completion of deals with the The Big Bang Theory star and former Jeopardy! champion to continue to split hosting duties in a note to fans (You can read it in full below).

touting Jeopardy!‘s viewership increase year over year, Davies also confirmed that Bialik will host Celebrity Jeopardy! on ABC this coming season. As for the flagship syndicated game show, Jennings will host the first stretch of episodes of Season 39, which starts tapings next week, through December, with Bialik stepping in starting in January as she juggles her commitment to her Fox comedy series Call Me Kat.

“We have so much Jeopardy! to make, and so many plans for the future, that we always knew we would need multiple hosts for the franchise and we are just so grateful that Mayim and Ken stepped in and stepped up to put the show in a position to succeed,” Davies wrote

During his portion of the season, the inaugural Second Chance competition and host will host the expected Tournament of Champions, Matt Amodio, Mattea Roach, Ryan Long and more. The current plan is for Bialik is to host a couple of new tournaments as well as the Jeopardy! National College Championship and as many weeks as she can manage with her commitment to Call Me Kat.

Bialik, who had previously announced as host of the Jeopardy! primetime and spinoff series, and Jennings had been filling in as guest hosts of the mothership syndicated program following the abrupt exit of Mike Richards as host in August after one day of tapings. The two were subsequently named full-time hosts for the remainder of Season 38. Because of the way the duo’s co-hosting arrangement came to be last season with no advance notice, they alternated based on availability, which created some confusion. The process is being streamlined for next season.

We know you value consistency, so we won’t flip flop the hosts constantly,” Davies said.

He also announced a new podcast, Inside Jeopardy!.

I write today with the exciting news that we have closed and signed deals with Mayim Bialik and Ken Jennings to be the hosts of Jeopardy! moving forward.

The fact is, we have so much Jeopardy! to make, and so many plans for the future, that we always knew we would need multiple hosts for the franchise and we are just so grateful that Mayim and Ken stepped in and stepped up to put the show in a position to succeed. And succeed it has. With Mayim and Ken hosting, the show is considerably up in viewership year over year, with more than 27M viewers tuning in each week this season. When you consider that almost every other show in broadcast television and syndication is declining, this has been a quite remarkable season: we’re the most-watched entertainment show on all of television. Yes, all of television.

In Mayim and Ken, we have two outstanding hosts at the beginning of their Jeopardy! hosting careers who connect with their own unique fanbases, new fans, and the traditional Jeopardy! viewer. Ken will kick off the season in September, host the Chance competition and the anticipated inaugural Tour and Second Amonament of Champions, Mattdio, Mattea Roach, Ryan Long many, many more. His initial hosting run will take us through December. In the meantime, Mayim will host Celebrity Jeopardy! on ABC in primetime. When she takes over from Ken in January, the current plan is to have her host a couple of new tournaments as well as the Jeopardy! National College Championship and as many weeks as she can manage with her other primetime commitment to Call Me Kat. We know you value consistency, so we will not flip flop the hosts constantly and will keep you informed about the hosting schedule.

Mayim and Ken are both extraordinarily talented and simply lovely humans. They support the staff and each other. They love and respect this institution of a television program. In return, the staff and I are honored to work alongside them.

So, I mentioned our plans for the future…

Well, the future will start this Monday as we launch three new initiatives on a single day:

1. Repeat season is upon us. But instead of repeating our tournaments as we have in the past, this year, my fellow producers and I have handpicked six weeks of some of our favorite episodes of the season, featuring our closest games, super-champions, and some of the people who will be announced as part of our inaugural Second Chance competition.

2. Jeopardy! Highlights Starting Monday, we will be releasing a daily three minute highlight recap of the day’s Jeopardy! episode on our website, across all of our social, and with our partner affiliates. Now, for the first time, you can catch up with the key moments of each and every game.

3. “Inside Jeopardy!” podcast Because all of the above gives us so much to talk about, and because there is always so much to talk about on Jeopardy! (it’s a sport, remember?) we will be launching a topical weekly podcast wherever you listen to your podcasts. Hosted by the Jeopardy! producers, including me, “Inside Jeopardy!” will give you all an inside look into everything going on behind the scenes at America’s Favorite Quiz Show: everything from gameplay analysis and behind-the-scenes stories, to official announcements, and special interviews. Please subscribe now to “Inside Jeopardy!” on Spotify, Apple or wherever you listen to podcasts.

On Monday’s podcast, we will announce all of the contestants who will be returning for a Second Chance to become a Jeopardy! champion. And I will share my vision for Jeopardy!’s future, including new developments in the areas of pop culture and sports, plans for a Jeopardy! Honors awards show and my biggest and most passionately held idea: a Jeopardy! Masters league in primetime or on a streaming platform.

To conclude, I want to congratulate both Mayim and Ken. They have both been a joy to work with. They have my commitment, my producer oath, that I will focus on nothing but improving the show around them so that they can do their best work and approach every day in the studio with excitement and energy. And speaking of, we’re back in the Alex Trebek Stage on Monday. I simply can’t wait.