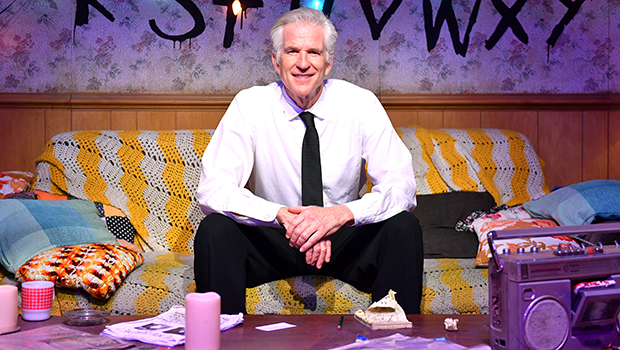 Who doesn’t love a good surprise? When Stranger Things returned for its 4th season this summer after a long, LONG hiatus, fans were treated to many bombshell twists and turns: the reveal of Vecna, the power of Kate Bush, and the much-anticipated return of Eleven’s ‘Papa’ Dr. Brenner, played by Matthew Modine.

Coinciding with the release of the new season was the debut of Stranger Things: The Experience, an immersive adventure that allows fans to visit Hawkins and join forces with their favorite characters in real life to save the beloved town. The experience’s storyline, developed exclusively with the show’s creators, allows guests the opportunity to interact with their favorite characters, including Mathew’s Dr. Brenner.

on August 31st, Matthew surprised a handful of lucky fans visiting the experience in Brooklyn, New York. “It’s kind of like going to a movie premiere,” Matthew shared with HollywoodLife in an EXCLUSIVE chat ahead of his visit. Along with sharing his joy about being part of the experience, Matthew also talked to us about season 4, working with Millie Bobby Brown and the rumor of the show retroactively editing previous seasons, a rumor started by the show’s creators the Duffer Brothers, but quickly shut down by the show’s writers earlier this summer.

PSA: no scenes from previous seasons have ever been cut or re-edited. And they never will be. pic.twitter.com/H0j8JwidLs

Thanks for making the time, Matthew! I actually ‘Stranger Things: The Experience’ over the summer and it really is quite fun. What was it about the idea of ​​this experience that made you want to participate?

Matthew Modine: The fans of Stranger Things, globally, are different than any fans that I’ve encountered over the course of the four decades that I’ve been working in the entertainment industry. They’re just so passionate. There’s just something about the show and the characters that is different, it’s different than anything I’ve ever participated in. So, it’s wonderful to be able to bring a different experience than one that’s just kind of passive to the fans of the show and bring them something that allows them to physically participate in rather than just watching.

Not only did you revive Brenner for this experience, but you finally returned for season 4 of Stranger Things. What’s great about Brenner’s return is that it ties up loose ends for Eleven’s character. Still, there are so many unanswered questions about Brenner himself – like how he survived the Demogorgon attack in season 1. Did the Duffers give you a satisfying answer about that before you returned?

Matthew Modine: I wasn’t given an explanation from them, so I had to create one in my own mind. And, you know, that’s an actor’s responsibility with every role that you play; you have to create a backstory. And while my backstory may differ from the Duffers and the other writers that they employ to write these episodes, or the fan books that get written, I have a very specific backstory for my character.

That’s great that you’re given the license to do that, especially with such a very tightly constructed world and narrative.

Matthew Modine: That’s always the actor’s responsibility. It’s not just repeating lines; the words are only a tool to make you understand something that’s happening internally.

You know, in the first episode of season 4, when I realized that [10’s] been killed — that was a very emotional moment, because I believe that Dr. Brenner loves each of those children in their own special way. Had another actor been portraying Dr. Brenner, he may or she may have chosen to not pay any attention to the dead child at all. To take him into a loving embrace and to feel Dr. Brenner’s loss from him was crucial and essential to me and the way that I was going to portray the character.

And this extends into my relationship with Millie and that complicated relationship [between Brenner and Eleven]. Millie and I, because we’ve been working since she was 11 years old, that relationship in the love that we have for each other is something that is palpable. It’s something that goes beyond the words, but then you feel the emotional connection between those two people. And Millie and I worked very hard to bring that to the audience.

Another unanswered question is how Brenner feels about Eleven having a new father figure in her life. Fans were hoping there would be some kind of acknowledgment of David Harbour’s character by Brenner in some way. Was there ever conversations about how Brenner feels about Hopper stepping in as Eleven’s dad and how it motivated him?

Matthew Modine: I was never a part of a conversation like that. I think that the Duffer Brothers tried to introduce something that was more complicated about Hopper than meets the eye toward the end of season 1, when there was a scene between [Brenner & Hopper]. They sort of planted seeds for there to be something, but there was no there ‘there’. I think that’s why some of the fans are upset that they’re going back and re-editing loose threads out of the episodes from season 1 through 3, that sort of revisionist editing. I think that there are a lot of fans that are upset about that, because there were threads that were created that weren’t tied up.

That scene from season one, where Hopper essentially sells Eleven and the other kids out to Brenner — that’s never been addressed ever in any episode after that. Was there ever a time or a script anywhere that Hopper’s betrayal was brought up?

Matthew Modine: At the. And if they can, if they do do that revisionist editing, probably they’ll remove that scene from the show, I would guess, because there’s no there ‘there’.

It does feel like that there’s space to explore Brenner more and you’ve hinted in another that you don’t think that we’ve necessarily seen the last of Brenner interviews. If it does happen, that he’s managed to escape death twice, what are your hopes for him in season 5?

Matthew Modine: As you saw in season 4, there’s a profound philosophical person who exists within that man who’s doing these experiments. I think you have to ask yourself, “Why was Dr. Brenner chosen to be the person who led those experiments? What gifts did he have? Why does he know so much?” I think that’s a really important question for the fans to ask.

I think what Brenner knows most is that love is more powerful than hate. Think of Eleven: whenever she uses her powers, she has to go from a foundation of anger and hatred. That’s when she’s most powerful, when she’s experiencing those emotions. But what I think she may have learned from Dr. Brenner is that love is more powerful than hate. And as a message to the world at this juncture, as we’re closing in on 2023 — I don’t think that there’s a more powerful message that a network or a streaming service like Netflix could share with the world, then a message of love. That what Eleven discovers is that her power will become even greater when she stops using anger and hatred, but love, and I think that love can be the thing that saves Hawkins.

If you would like to check out Stranger Things: The Experience, CLICK HERE to see availability and purchase tickets. After successful debuts in New York, San Francisco, and London, the immersive experience will be opening the rift next in Atlanta on October 22.

This interview has been edited for length and clarity.