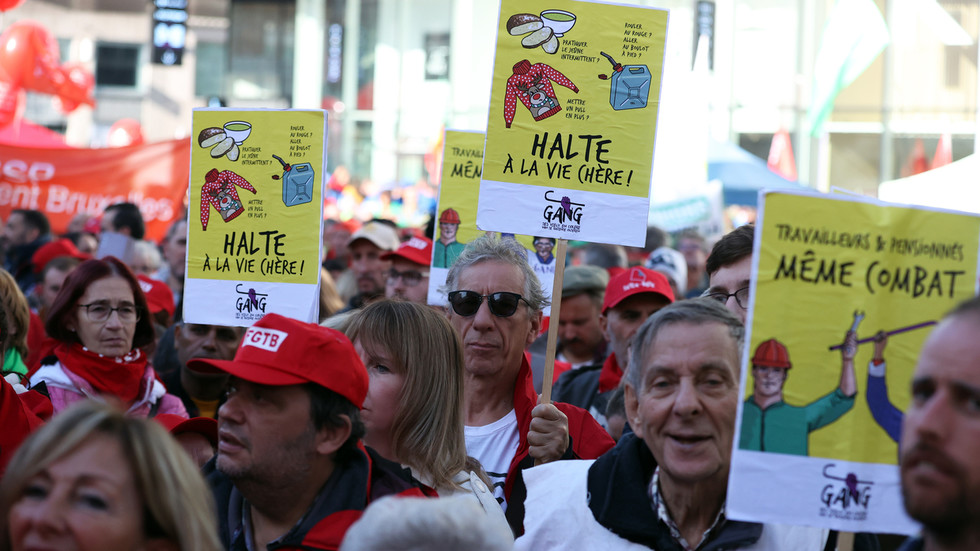 More than 10,000 demonstrators took to the streets of the Belgian capital to protest against skyrocketing prices

Thousands of demonstrators took to the streets of Brussels on Wednesday for a “national day of action” to demand higher wages and lower energy prices. According to police, over 10,000 people descended on the Belgian capital as it was revealed that some 64% of the country’s citizens are afraid they may not be able to pay their bills.

The demonstrations were organized by Belgian trade unions, who claim that the average energy bill for families in the country has already increased threefold to more than €700 ($691) a month.

“It’s not that we don’t want to pay, but we can’t pay,” said Thierry Bodson, chairman of the General Labor Federation of Belgium, while speaking to thousands of union activists at the Place de la Monnaie. While the average Belgian family only makes €2,500 ($2,468) a month, Bodson pointed out that it’s “absolutely impossible” for someone below that line to pay their bills.

Addressing the government’s recommendation for citizens to use less energy, Bodson said this was “pointless,” as most Belgians have already taken all possible measures to lower their energy consumption but it was still not enough.


Placards seen in the crowds shared Bodson’s sentiments with some reading “Freeze prices, not people,” and “Everything is going up except our wages.”

The protesters are demanding that Belgian authorities do more to combat skyrocketing prices, and claim they should draw additional resources from energy companies that have reported record profits this year and made billions while the standard of living for average people has plummeted.

Last month, Belgium’s Statbel statistics agency reported that inflation in the country had jumped to 9.94% amid a surge in energy prices, almost reaching a record set in 1976.

Meanwhile, Belgian Prime Minister Alexander de Croo has warned that “the next five to ten winters will be difficult” due to record gas prices, but stated that Belgium would harden the crisis “if we support each other in these difficult times.”