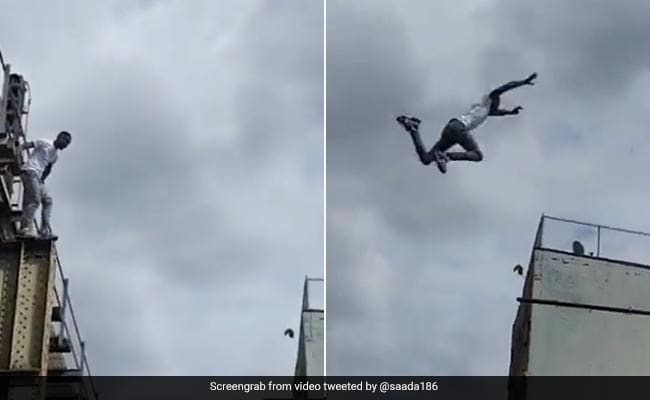 Picture shows a man leaping from elevated subway tracks in Brooklyn onto the roof of a building.

A video is making the rounds on the internet which shows a man leaping from elevated subway tracks in Brooklyn onto the roof of a building to avoid being caught by policemen. The cops had spotted Kendall Floyd driving without a seatbelt and pulled him over.

The video begins with Mr Floyd standing just outside the track area, bending down over and adjusting his footing while the public can be heard screaming, “Don’t do it, man! It isn’t worth it!”

But the 25-year-old ignores all the calls and takes the plunge, jumping a large distance onto the roof of a commercial building across the street.

Several cops then rush around the corner, through a chain-link fence that separates the area behind the building where the man landed.

The video is circulating widely on Twitter and other social media platforms.

Mr Floyd was driving around Williamsburg on Wednesday afternoon when officers pulled him up for not wearing a seatbelt, New York Post reported.

However, the authorities executed the traffic check, the man pulled open his car door, punched a cop in the arm and fled.

The police managed to catch Mr Floyd again about three streets away, but he refused to surrender, the Post further said, adding that the young man then jumped over a stanchion pole onto the subway rails at the Flushing Avenue station.

Mr Floyd suffered a leg injury after his dramatic plunge and was arrested by the police officers.

He was then taken to the hospital in stable condition.