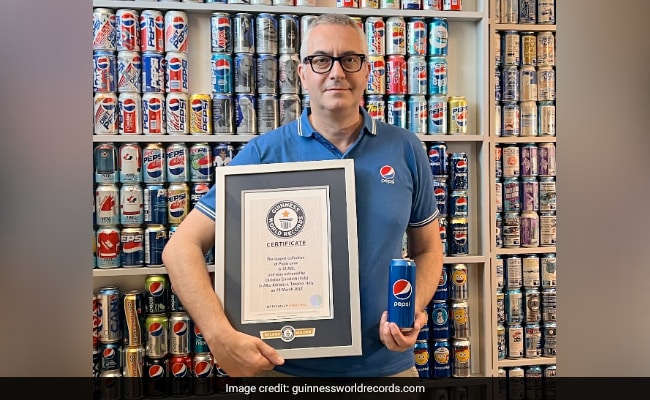 Christian Cavaletti is the proud owner of 12,042 cans collected from nearly every continent on Earth.

An Italian man has created a new Guinness World Record for the world’s largest collection of Pepsi cans. Christian Cavaletti is the proud owner of 12,042 cans collected from nearly every continent on Earth, including some of the oldest, Guinness World Records (GWR) said in a release.

Mr Cavaletti is originally from Milan and holds a degree in Synthetic Organic Chemistry. He works as a site manager for a local textile firm and his hobby of collecting Pepsi cans from all over the world led him to break the world record.

The 52-year-old had already broken the record for the first time in March 2004, by collecting 4,391 Pepsi cans. However, his collection is a genuine museum now as he continues to add new artefacts.

The cans he possessions were recounted in March 2022, the GWR said, adding that Mr Cavaletti broke his previous record on that occasion with an incredible collection of 12,042 cans.

Mr Cavaletti, who was born in 1970, began collecting Pepsi cans on June 1, 1989. When he shared his obsession with his brother Edoardo, he also started getting fascinated by Pepsi cans after seeing the film Back to the Future, GWR Said

Marty McFly (played by actor Michael J. Fox) orders a Pepsi and receives a futuristic “Pepsi Perfect” bottle in the film. Edoardo began collecting artefacts associated with the renowned sci-fi film, and the “Pepsi Perfect” was one among them, GWR further out.

Mr Cavaletti and his brother are known as the “Pepsi Twins”.

According to GWRnow his basement is filled with shelves that he made to store all his Pepsi cans, all divided by country and in chronological order.