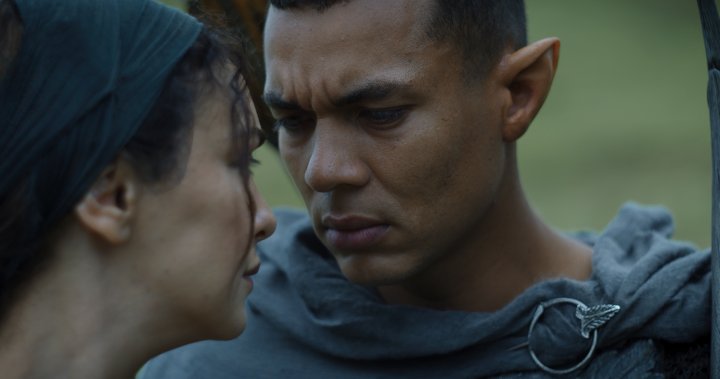 The cast of The Lord of the Rings: The Rings of Power issued a public and coordinated statement condemning the racist abuse hurled at the actors of color on the show.

The Rings of Power is a prequel TV show set in Middle-earth before the events of the original Lord of the Rings trilogy. It borrows a lot of its visual style from Peter Jackson’s movie adaptations. One way the show sets itself apart from Jackson’s retelling, though, is the casting in Middle-earth.

The Rings of Power features the first elf of color in any adaptation of JRR Tolkien’s work, played by Afro-Latino actor Ismael Cruz Cordova. The show also introduces the first female and first Black dwarf, brought to life by Sophia Nomvete.

Some fans of the original books and movies weren’t onboard for seeing people of color inhabit this famous fantasy realm, with many asserting that Black people don’t exist in Middle-earth, a fictional place.

In response to the harassment, the cast of The Rings of Power released a message showing their unity.

“We, the cast of Rings of Power, stand together in absolute solidarity and against the relentless racism, threats, harassment and abuse some of our castmates of color are being subjected to on a daily basis. We refuse to ignore it or tolerate it,” read a message released by the show’s official Twitter account and shared by members of the main cast.

The statement also pushed back on claims that Tolkien himself would not have supported seeing people of color in Middle-earth.

“JRR Tolkien created a world which, by definition, is multicultural. A world in which free peoples from different races and cultures join together, in fellowship, to defeat the forces of evil. Rings of Power reflects that. Our world has never been all white, fantasy has never been all white, Middle-earth is not all white. BIPOC (Black, Indigenous, and people of colour) belong in Middle-earth and they are here to stay.”

While Tolkien isn’t around to comment on the situation, the former cast of the Lord of the Rings movie trilogy is.

Elijah Wood, who played Frodo in the original movies, tweeted a photo of himself and Dominic Monaghan and Billy Boyd, who played Merry and Pippin, wearing T-shirts inscribed with a message in the Elvish language Neo-Sindarin reading, “You are all welcome here.” The shirts also feature illustrations of various ears in a range of skin colors and shapes — human and elf.

Actor Sean Astin, who played Samwise in the original trilogy, tweeted a picture of himself wearing a baseball cap with the same message and graphic.

“All our love and fellowship go out to the fans supporting us,” continued the statement from The Rings of Power cast, “especially fans of color who are themselves being attacked simply for existing in this fandom. We see you, your bravery, and endless creativity. Your cosplays, fancams, fan art and insights make this community a richer place and remind us of our purpose. You are valid, you are loved, and you belong. You are an integral part of the LOTR (Lord of the Rings) family — thanks for having our backs.”

Global News spoke to a couple of cast members of color before the premiere of The Rings of Powerincluding Cordova and Nazanin Boniadi, a British-Iranian actor playing a human healer named Bronwyn in the show.

Boniadi and Cordova both pushed back on claims that Amazon was bowing to “woke” pressure to cast diversely.

“For the characters of color on the show … I promise you will see them and you’ll be like, ‘There’s no one else that could have played this thing,’” Cordova said. “This wasn’t … colourblind casting, trying to tokenize people. It was like the soul of the character met the soul of the person.”

‘Rick and Morty’ Season 6 flips the script — here’s how

Cordova said that he has faced some backlash from fans who don’t see a place for people of color in the world of LOTR and that he doesn’t consider these people as true fans at all.

“I cannot understand or call them fans because it’s just another kind of hate that just has no place,” Cordova said. “And in truth, we’re not giving it a lot of power. We’re doing this thing for the people that want to see us thrive, we’re doing this for people who … are going to find themselves represented, inspired.”

2:20
Amazon gambles on new ‘Lord of the Rings’ adaptation