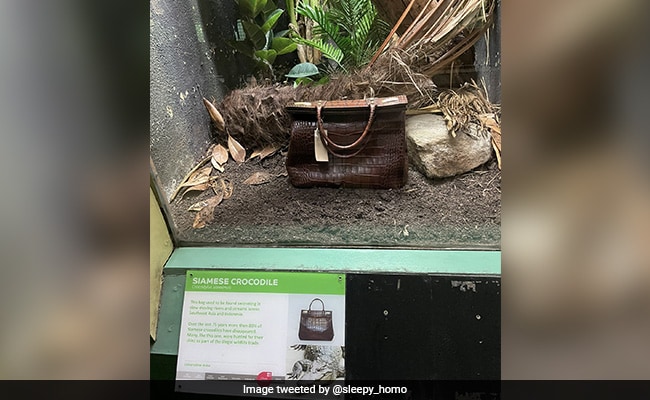 When people head to a zoo, they expect to see animals in action. But a zoo in London has done something remarkable to draw attention towards the threat species on animals are facing. At the enclosure meant for Siamese Crocodile, the zoo authorities have placed a handbag that has been made from its skin, in a stand against using animal fur and skin in fashion. The poignant photo has gone viral on Twitter since being posted on August 2 and received more than 370,000 likes and over 60,000 retweets.

The photo has been posted by Twitter user Tom, who visited the zoo, with the caption, “London zoo is not pissing around.”

London zoo not pissing around pic.twitter.com/C9cxoDCba2

The message pasted along with the crown-coloured bag makes a serious point. “This bag used to be found swimming in slow-moving rivers and streams across Southeast Asia and Indonesia. Over the last 75 years, more than 80% of Siamese Crocodiles have disappeared. Many, like this one, were hunted for their skin as part of the illegal wildlife trade,” it said.

According to the BBCthe bag was seized by UK border officials at a London airport in 2018 and handed to the zoo in order to highlight the impact that the illegal wildlife trade is having across the globe.

“It’s not even a cute bag…I get way animals gettin revenge now cuz what you mean you killed my family to make this ugly shit?” said one user. “It should be taken seriously,” said another.

Siamese crocodiles, native to parts of Southeast Asia, are critically endangered and nearly extinct in the wild. Only 500-1,000 of these crocodiles are thought to be left worldwide due to habitat loss and hunting.

People for the Ethical Treatment of Animals (PETA), an organization working towards the ending abusive treatment of animals, recently said that more than 1 billion animals are killed for their skin or hides annually worldwide.

Reptiles such as pythons, caimans, rat snakes, monitor lizards, tegu lizards, alligators and crocodiles are routinely hunted for their skins.

The 196-year-old zoo, in London’s Regent’s Park, is home to more than 3,000 animals confiscated by the border police at the city’s airports.