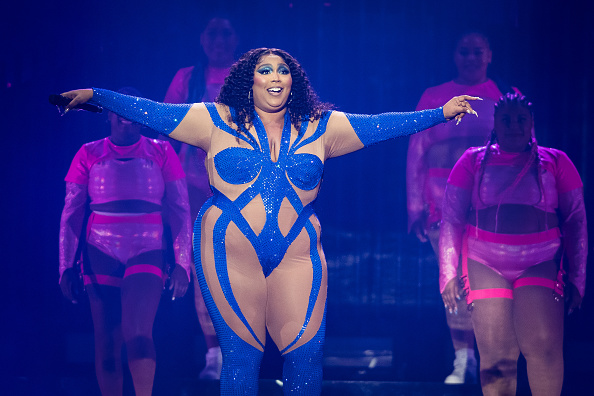 Lizzo is a woman of many firsts–the first woman to headline the Bonnaroo Music and Arts Festival, the first female rapper in history to reach the top 3 on Billboard Hot 100 with 3 solo songs, and now the first person to ever play a nearly 200 -year-old flute that belonged to a former United States president.

The ‘2 Be Loved’ singer is known for her talents on the woodwind instrument, and was recently given the honor of playing the crystal flute that was gifted to James Madison in 1813. The flute had been maintained by The Library of Congress for decades before it was handed over to Lizzo on the first stop of her tour in Washington, DC.

Lizzo shared footage from the moment she gagged over getting her hands on the instrument. Despite her excitement, she was sure to handle the instrument with care telling fans,

B*tch I’m scared. It’s crystal. It’s like playing out of a wine glass b*tch, so be patient.”

B*tch I just twerked and played James Madison’s flute from the 1800s. We just made history tonight! Thank you to The Library of Congress for preserving our history, and making history freaking cool. History is freaking cool you guys.”

Just days before Lizzo’s performance, Carla Hayden, the first woman and African American librarian of Congress, invited Lizzo to see the flute in a tweet. Lizzo’s excited response dela set things in motion, and dela handlers brought the flute onstage at her concert on Wednesday night.

The Library later tweeted that the flute made it back safely with help from the local police.

We just did a DNA test. Turns out: It’s 100% that [crystal] flute @lizzo played at her DC stop on the #SpecialTour tonight. It’s safe & sound back at the Library now. Thank you @CapitolPolice for escorting it. Watch this space for more from Lizzo’s Library visit. #LizzoAtLOC pic.twitter.com/YnS5wVoALN