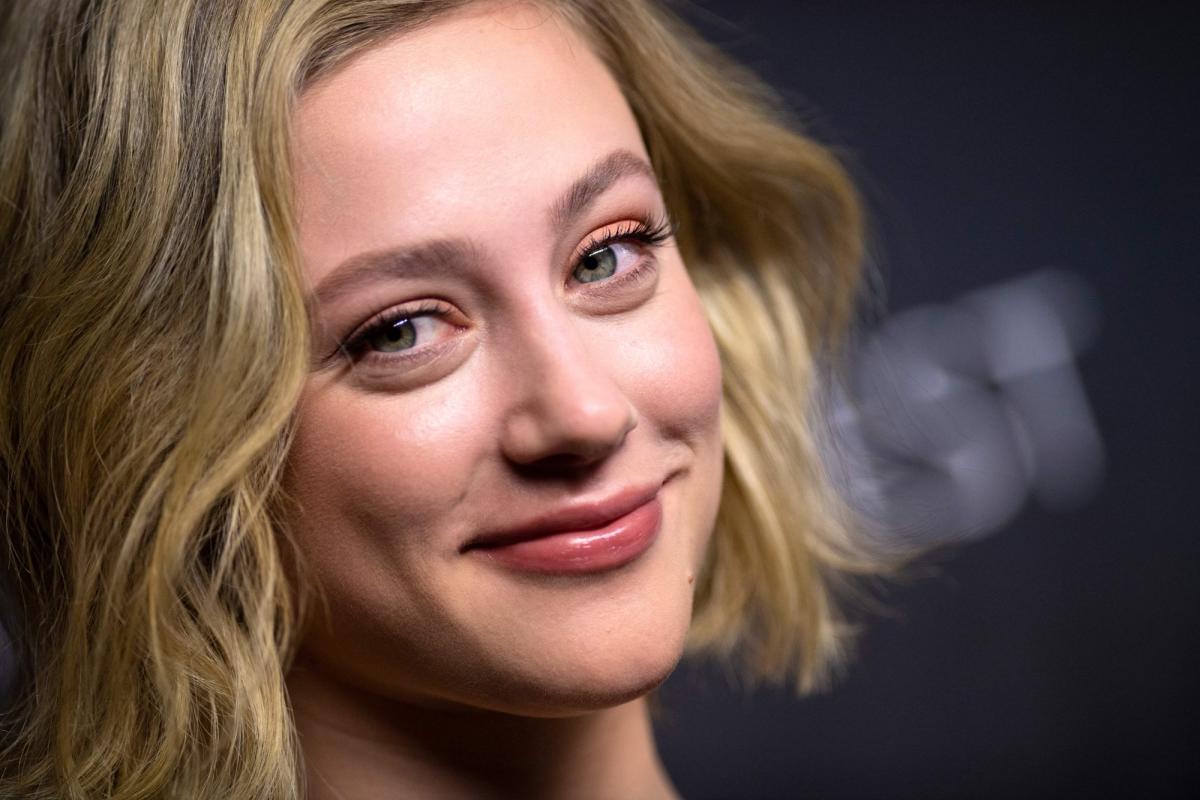 Lili Reinhart calls her own shots. And she makes her own calls from her.

It’s jarring when a big-name talent arrives for an interview on their own — either in-person or via the telephone or Zoom — because it almost never happens. Not without the buffer of publicists, assistants, handlers, and other assorted hangers-on. Reinhart calls me, right on time. No one patches her through. No one else is on the line. That’s a surprising move, particularly for the “Riverdale” and “Hustlers” star who has earned a reputation for being outspoken when left to her own devices (often literally).

In May, the actress and producer made headlines when she took to Instagram after the Met Gala to talk about how upset she was to see so many celebrities “starving” themselves in the name of fashion. “To walk on a red carpet and do an interview where you say how starving you are… because you haven’t eaten carbs in the last month… all to fit in af—ing dress?,” she wrote on an Instagram Story. “So wrong. So f—ed on 100s of levels. To openly admit to starving yourself for the sake of the Met Gala. When you know very well that millions of young men and women are looking up to you and listening to your every word. The ignorance is otherworldly and disgusting.”

That unleashed a slew of stories with headlines blazing about Reinhart “slamming” other celebrities; Reinhart later opted to take a social media hiatus. Speaking out is nothing new for Reinhart; she’s done that for years, often centered on her own personal life dela or the wackier machinations of The CW’s nutty “Riverdale,” in which she plays the iconic Betty Cooper. The driving force isn’t grabbing headlines, but a real desire to talk about the causes that are important to her.

“Sometimes I do feel like a little bit of the black sheep speaking out,” Reinhart said in a recent interview with IndieWire. “’Why is no one else saying anything about this?’ Then I realize why they’re not saying anything about it because the second I do, here comes 30 articles saying that I’m ‘slamming’ a celebrity. I’m actually just sharing an opinion that is incredibly important to me.”

She added, “I really wish other people in the industry did that. We’re just collectively scared to go against the grain and a lot of people just hop on a bandwagon. … There’s no guidebook here, no one teaches you how to wake up to 20,000 tweets telling you that you should kill yourself or you should get a nose job or that you’re fat. Whatever the case may be, you just don’t sign up for that and no one actually teaches you how to handle that, you’re just expected to. There’s nothing more horrifying than seeing your name trend on Twitter, I’ll tell you that.”

Reinhart knows her social media reputation, but that’s not something she weighs against the idea of ​​staying silent. “I definitely go on rants on social media, I’m very guilty of that,” she said. “I don’t like to just sit idly by, I don’t like to keep my mouth shut. I know people on Twitter hate me. There are articles and everyone is like, ‘God, does this girl ever shut up and stop complaining?’ No, actually, I don’t, because I’ve got a lot to say and no one else really seems to be.”

Disordered eating and mental health are particular hot buttons. “I’ve certainly been to the point where I thought I need help, that I’m not OK mentally, that I wish I could go somewhere,” she said. “Unfortunately, a lot of the resources are $90,000 retreats in Malibu, and I’m not about to just go sit on a lounge chair and have therapy for five days and be like, ‘Cool! I’m better!’ I wish there were better resources for mental health, and in the sense that people need to be taken more seriously when they’re struggling.”

That lack of resources is another reason she chooses to speak out in real time. “When someone is talking about disordered eating or promoting unhealthy habits, that’s where I have to step in,” she said. “I’m thinking, ‘You’re harming me and you’re triggering me, which means you must be triggering millions of other people who are hearing what you say.’ It gets me in hot water, but I guess I’d rather be in hot water than just be someone who doesn’t stand for anything.”

Reinhart’s next big stand lies is producing. Her first production was Amazon’s 2020 drama “Chemical Hearts,” an adaptation of Krystal Sutherland’s popular YA novel “Our Chemical Hearts.” The streamer was eager to develop the project with Reinhart and, while she admits the opportunity “came out of the blue,” something clicked when she considered this next step.

Amazon was so pleased with Reinhart’s work on the project that it offered Reinhart and her Small Victory Productions a first-look deal last June. So far, Reinhart describes the process as “fucking amazing.” Reinhart and her producing partner Catherine Hagedorn have seven projects in development with Amazon. The process is, of course, slow and Reinhart expects that her next producing project will arrive next year after “Riverdale” concludes its run.

Reinhart is still a little struck by her good fortune (“What the hell 23-year-old has their own production company?”), but she’s got plenty of inspirations to guide her, including her “Hustlers” director Lorene Scafaria (Reinhart said she’d “love, love” to have her direct for Small Victory and is actively looking for projects for the “Succession” director) and Margot Robbie, whose LuckyChap Entertainment productions include “Promising Young Woman” and “I, Tonya.”

Reinhart said that she and Hagedorn look for “young adult stories that are modern,” she said. “I think we’ve overdone the losing-my-virginity story, going-to-prom story, coming-out stories. what happens after all those things? We want to dive into exploring queer stories, diverse mental health issues, a wide variety of things, but for young people, people in their twenties like me who are still pretty clueless and figuring things out. I want to make shows and movies that I can relate to and that I know my friends can relate to.”

Her latest production is the Netflix rom-com “Look Both Ways,” in which she also stars as aspiring animator Natalie, who discovers on the eve of her college graduation that she might be pregnant. The film, written by first-time screenwriter April Prosser, then bisects into parallel storylines: one in which Natalie is pregnant, and one in which she is not. In both stories, Natalie deals with her career, different love interests, and how she feels about motherhood.

The film is the first American production directed by “Rafiki” breakout director Wanuri Kahiu, who has exactly the kind of voice Reinhart wants to champion. Reinhart met with Kahiu during the earliest days of lockdown in March 2020. (They Zoomed, of course.) “I was just like damn, what a filmmaker, what a beautiful woman in this industry who wants to create art,” Reinhart said. “It was a very collaborative, warm experience.”

Reinhart isn’t bothered by the inevitable comparisons to Peter Howitt’s 1998 romantic comedy “Sliding Doors,” which starred Gwyneth Paltrow as a woman whose life hinges on whether or not she catches a train (and that film was often compared to Krzysztof Kieślowski’s 1987 film “Blind Chance”). One big difference: Howitt’s film makes a pretty strong case for one timeline being much more favorable to its leading lady. “Look Both Ways” does not do that.

“It really just was one of those things where I had to let [the script] sit and sink into my heart a little bit,” Reinhart said. “I think as someone in your twenties — as someone at any fucking age — you don’t know what the fuck you’re doing. None of us have any idea what we are doing. Sometimes there are big decisions that forever change everything in your life, but there are also decisions that lead you back to where you’re supposed to be. I think the things that are meant to be end up happening.”

Perhaps Reinhart is already the change she’s looking for, one person who seems reliably interested in taking these stories and struggles and people seriously. If that means bothering people, that’s fine, because Reinhart knows the power of hearing someone speak her language. Maybe it’s “annoying,” but at least it’s real.

“If I have to become someone who maybe has an ‘annoying’ reputation, cool, so be it,” Reinhart said. “I don’t really walk around thinking, ‘Oh, I have to be such a role model.’ I’m just thinking of when I was 15, when I was even 12, the only person I heard speaking about their mental health was Demi Lovato, and I was like, ‘Wow, that’s so cool and interesting to hear this person who has a television show and hit records and clearly has money and glamour, and yet they’re speaking about bipolar disorder.’ I just thought that was so profound, and I would hope that young men and women today can at least have a couple more examples of that and just see behind the bullshit, because it’s all bullshit.”

All of it? Not Lili Reinhart.

“Look Both Ways” starts streaming on Netflix on Friday, August 19.