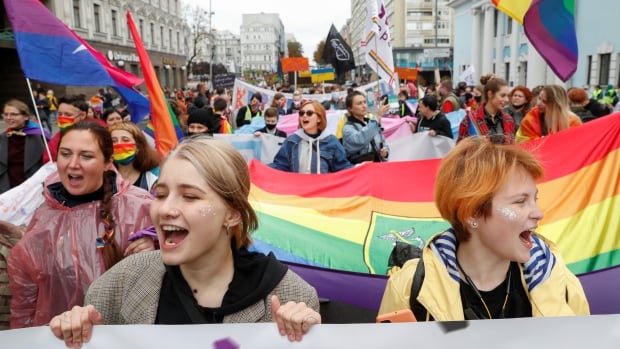 When Edward Reese, a queer activist who works with Kyiv Pride, decided to flee Ukraine on March 8, he knew it was going to be a long journey.

After leaving his home and walking for an hour in the freezing cold to the nearest working subway station, spending “one hell of a night” in a bomb shelter, catching a day-long bus ride to Lviv, and being escorted by aid workers to the Poland-Ukraine border, Reese was finally able to set foot in a small Polish border town.

“We slept for like an hour or two in the morning in this big, big hall with tones of other people on these makeshift beds,” said Reese in an interview with CBC News from Warsaw last week.

A few hours later, he took a bus to Warsaw, where a local LGBTQ advocacy group connected him with queer-friendly hosts who could temporarily house him.

Although Poland has limited the rights of LGBTQ people in recent years, Reese, who is non-binary, said he feels safe in the country. But that’s largely because it was quickly welcomed and aided by Poland’s LGBTQ community.

“Poland is not necessarily the best country for LGBTQ people to live,” said Julia Maciocha, chairwoman of Warsaw Pride, one of the organizations helping connect queer and gender-diverse refugees to appropriate resources.

“So, we created a database of people that we know that are part of the community so we can match them with people that are in need of safe shelter.”

Since Russia invaded Ukraine just over two weeks ago, more than 3 million people have fled, with more than 1.7 million of them arriving in neighboring Poland.

A network of activists organizations have sprung action to support those refugees who are LGBTQ-friendly, and access-to-safe, queer-friendly housing, transportation and medical care.

“I was almost crying because European organizations like Warsaw Pride, like Budapest Pride, they reached out to us like in the first day of the war, offering their help, offering shelter, offering transportation from the border,” said Lenny Emson, executive director of Kyiv Pride.

“This is… a very good feeling that really helps us to survive through this time.”

Some of the neighboring counties refugees have to pass through have become hostile to LGBTQ people in recent years.

In Hungary, Radio-Free Europe/Radio Liberty reported that in 2020, lawmakers amended the country’s constitution to define marriage as a heterosexual union and allow only married couples to adopt, de facto barring same sex couples from adopting. It also limited the gender on legal and identification documents to the one assigned at birth.

2.8 million people have fled Ukraine, more than half to Poland, UN says

The United Nations High Commissioner for Refugees estimates that nearly 2.8 million people have been forced to flee Ukraine since the Russian invasion began. About 1.7 million of those went to Poland. 3:47

In Poland, same-sex marriage is not legally recognized and adoption by same-ex couples is illegal; some jurisdictions in the country have gone so far as to declare themselves “LGBT-free zones.”

“So the difficulty is not just making it to the border checkpoints but to be able to get safe haven once they do cross the border to a neighboring country,” said Kimahli Powell, executive director of Rainbow Railroad, an international organization that helps LGBTQ people facing persecution.

Reese said so far, he’s only received an incredible amount of support and is currently staying “in a really nice room” with three cats in his Polish host’s apartment.

“We have a great amount of these propositions to host people, to help … from queer people, feminists, different people in different Ukrainian countries who really want to help queer people to go through this,” said Reese, who’s preparing to relocate to Denmark soon.

Like Reese, some LGBTQ refugees plan to leave Poland after a few days for other European countries, Maciocha said.

Countries such as Denmark, Germany and the Netherlands are under less strain than bordering states and may be able to provide more resources and job opportunities to Ukrainian refugees, particularly those who are LGBTQ, she said.

The climate for the LGBTQ community inside Ukraine was not particularly accepting even before the war, Reese said. A 2019 survey of around 40,000 people in 34 countries conducted by the Pew Research Center found that only 14 percent of respondents in Ukraine thought homosexuality should be accepted in society.

WARNING | This gallery includes graphic images, including civilians killed by shelling in Ukraine:

One problem for transgender women who are trying to leave the country is that their government ID still identifies them as male, meaning they are subject to the law barring males between the ages of 18 and 60 from leaving the country.

Trans people can legally change their gender, Reese says, but the process is long and complicated and people who have not yet made the change are now effectively trapped.

“They can be discriminated [against]harassed and … of course, their attempts to cross the border would be unsuccessful.”

“We know for sure that there’s a shortage of antiretroviral medication for people living with and affected by HIV,” said Powell.

Emson, who is currently in Kyiv, decided to stay in Ukraine to fight the Russian forces and support the LGBTQ community still in the country. Gay and trans people are allowed to join the military in Ukraine and have been taking part in the defense of the country, he said.

“I would like the world to know that there are trans people and LGBTQ people in Ukraine who are serving, who are protecting, who are trying to make their inputs into this fight,” said Emson.

Right now, Emson says, many queer people in Ukraine need the same basic essentials as everyone else: food, shelter and medicine.

“Those who need medication, like trans people who are taking hormones, the situation is even worse because there is a huge shortage of medications right now, and to get hormones is very challenging, too.”

WATCH | Village near military base attacked by Russians mourn soldiers:

David Common visits Starychi, Ukraine, where villagers are grieving the loss of one of their own – a teacher turned soldier who died while fighting in Kyiv. Scenes like this one are playing out Ukraine across as war casualties mount. 2:41

The challenges facing LGBTQ Ukrainians closely mirror those of LGBTQ people in other conflict zones, according to Sharalyn Jordan, board chair of Rainbow Refugee, an organization that helps people forced to flee persecution because of their sexual orientation, gender identity or HIV status.

“People who are openly LGBTQ are at particular and distinct safety risks when they’re displaced,” said Jordan. “Borders are places where they’re under incredible scrutiny.”

She said that while Canada has offered to take in refugees, she’s not sure officials are aware of how to accommodate LGBTQ people.

Immigration Minister Sean Fraser said his department has created a new visa category that will allow an unlimited number of Ukrainians to come to Canada for up to two years. The government is also introducing an “expedited path” to permanent residency for Ukrainians who already have some family in Canada.

“We have seen some questions and concerns about how [the programs] will work for LGBTQ people who are displaced,” said Jordan.

“Just as an example, there is a visa requirement. Are these two offices ready to understand the different documentation that trans people and gender diverse people may be bringing? We also see that family unification may be part of the criteria, and we want to make sure that queer and trans understandings of family are included in the criteria.”

WATCH | Russian assault on Kyiv and other cities in Ukraine continues:

Russian forces are closing in on Ukraine’s capital, Kyiv, with deadly attacks in several suburbs. This comes as a new round of talks between Russian and Ukrainian officials show little sign of progress. 3:05