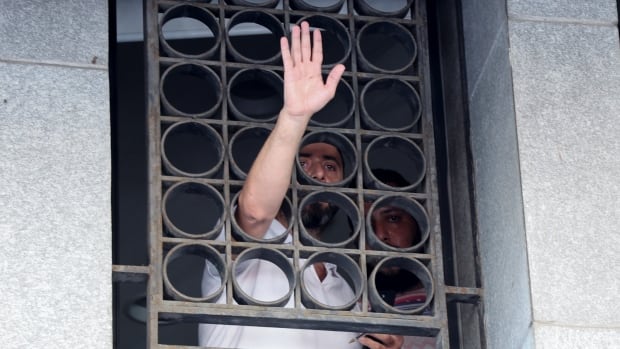 Five Lebanese banks were held up by depositors seeking access to their own money frozen in the banking system on Friday in a spiraling spate of holdups this week spurred by frustration over a financial implosion with no end in sight.

A total of seven banks have been held up since Wednesday in Lebanon, where commercial banks have locked most depositors out of their savings since an economic crisis took hold three years ago, leaving much of the population to pay for basics.

He was still locked in the branch hours later, telling Reuters by phone that he had handed over his gun to security forces and just wanted his money.

“I’ll stay here three, four, five days — I won’t move until I get my deposit,” he said.

‘What do you want them to do?’

Soubra said he had a refused an offer by the bank to take a portion of his $300,000 US in savings with a significant haircut and in the deteriorating local Lebanese currency.

“I deposited by money in dollars, I want them back in dollars,” he said.

Soubra was cheered on by a large crowd of people gathered outside, including Bassam al-Sheikh Hussein, who carried out the very first holdup in August to get his own deposits from his bank, which dropped charges against him.

“We’re going to keep seeing this happen as long as people have money inside. What do you want them to do? They don’t have another solution,” said Hussein, who got around $30,000 from his savings of $200,000.

Lebanon’s banks association announced a three-day closure next week over mounting security concerns and called on the government to pass necessary laws to deal with the crisis. The association a day earlier urged authorities to hold accountable those engaging in “verbal and physical attacks” on banks and said lenders themselves would not be lenient.

Authorities have been slow to pass reforms that would grant them access to $3 billion US from the International Monetary Fund to ease the crisis.

Among the laws-in-waiting is a capital controls law, still being debated by parliament. In its absence, banks have unilateral limits on most depositors, allowing them to retrieve limited amounts each week in US dollars or Lebanese pounds.

Withdrawals in Lebanese pounds are worth less and less, as the lira has lost more than 95 per cent of its value since 2019 and edged toward a new low of around 38,000 to the US dollar this week.

A hostage standoff in which an armed man demanded a Beirut bank let him withdraw his savings has ended with the man’s surrender and no injuries. Authorities said the man had a canister of gasoline and threatened to set himself on fire unless he was allowed to take out his money from him.

Banks say they allow exceptional withdrawals for humanitarian cases including health-care payments but depositors say the banks have not stuck to their word.

In Friday’s first case, a man was able to retrieve a portion of his funds from the Ghazieh branch of Byblos Bank, south of Beirut, before being arrested, the source said, adding that the weapon in his possession was believed to be a toy.

Byblos Bank could not immediately be reached for comment.

Another incident saw a man with a pellet gun enter a branch of LGB Bank in Beirut’s Ramlet al-Bayda area seeking to withdraw some $50,000 dollars in savings, a bank employee said.

Then, Mohammad al-Moussawi threatened the Banque Libano-Francaise bank in Beirut with a fake gun and managed to get $20,000 in cash out of his account, he said by phone.

“This banking system is tricking us and it’s worth my shoe,” he said, telling Reuters he would be going into hiding.

BLF Bank told Reuters the incident “took five minutes” and that no employees were harmed.

The fifth incident on Friday afternoon saw a man fire shots inside a branch of BankMed in Chehime as he sought access to his own savings, an industry source told Reuters. There were no immediate reports of injuries.

Friday’s incidents followed two others in the capital of Beirut and in the town of Aley on Wednesday in which depositors were able to access a portion of their funds by force, using toy pistols mistaken for real weapons.