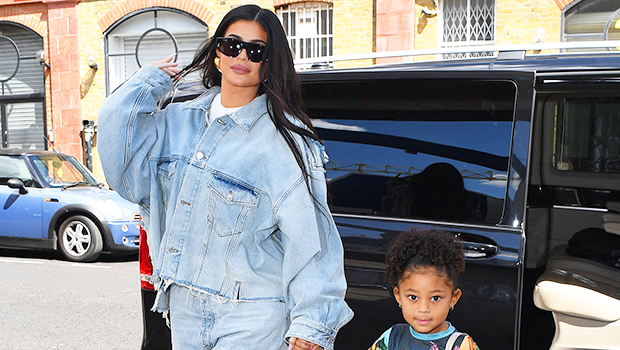 Kylie Jenner proved a doting mom once again as she treated her daughter and nieces to a trip to the happiest place on Earth! The makeup mogul was spotted at Disneyland with stormi4, and Stormi’s cousins ​​— Chicago West4, Dream Kardashian5, and True Thompson, 4 — on Thursday (September 15). In an adorable video shared to her her Instagram, Kylie could be seen holding hands with the four tots as they made their way through the amusement park rocking their finest Mickey Mouse gear!

In the clip, Kylie can be seen holding hands with the youngsters as they famous Anaheim landmark. Rocking a casual yet chic ensemble of a black tee and baggy pants, the reality star appeared to be having as much fun as her daughter and nieces dela!

The KarJenner cousins ​​are lucky enough to see each other on the regular, as their family loves to bring them together for fun events. On Easter, Khloe Kardashian shared adorable snaps and too-cute clips of her baby girl True enjoying an Easter egg hunt with her relatives North and Saint West, Penelope and Reign DisickStormi and Dream.

Meanwhile, Kylie recently commented on another KarJenner cousin who was not seen in the Disneyland clip: her newborn baby boy! She had stopped by The Late Late Show with James Corden last week and revealed she’s still not ready to announce her 7-month-old son’s name after she and her baby daddy Travis Scott decided their original moniker of “Wolf” wasn’t exactly the right fit.

“We haven’t officially changed the name,” Kylie told James while seated alongside her mom Kris Jenner. “His name is still Wolf. His passport ‘s Wolf, but that’s not gonna be his name. We’re just waiting.” After James Corden made a joke about the length of time the secret needs to be kept, Kris chimed in with her own attempt at humor, saying, “So we’ve been calling him ‘Andy’ for nothing?

Kylie — who also shares Stormi with Travis — went on to say that the parents don’t refer to their bundle of joy by “Wolf,” but they aren’t ready to share the other name, as it appears to still have a question mark hanging on it. “Travis likes to sometimes … one day, he’ll be like, ‘Oooh, this name’s kinda cool,’ and change it again,” the reality star explained. “So we’re just not officially gonna change it until…”

However, by the end of the segment, Kylie did reveal they have “zoned in on” one name. And when James asked if her son her was still named after an animal, Kylie said that was not the case. “There’s a huge exclusive!” James exclaimed.