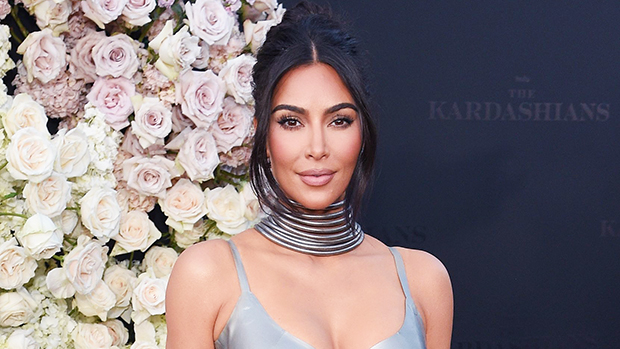 Kim Kardashian never misses an opportunity for glamour. And the SKIMs mogul, 41, pulled out all the stops for a new photoshoot, which she teased on Instagram on Tuesday, Sep. 21. All eyes were on Kim as she modeled a tiny silver outfit and blonde locks for the photoshoot.

The reality star smoldered in the behind-the-scenes snapshots, which were taken in a professional studio. In the photos, Kim strutted toward the camera to show off her dela hourglass figure in a cropped bustier covered in glittering shards of mirror. Made to look sexy, the structured top helped push up Kim’s already impressive cleavage, while also flashing a hint of her flat abs.

Kim continued to stun in a matching pair of silver hot pants, which helped highlight the mother of four’s toned legs, and hourglass figure. Keeping up the drama, the Calabasas native threw a long black robe over her arms as she vamped it up for the camera.

She was in full hair and makeup for the moment, flaunting smokey eyes and a peachy pout. Her bronzed skin her was glowing from every angle. Continuing to embrace her her blonde era her Kim piled her platinum locks on top of her head in a romantic bun with several loose strands framing her face.

The star of The Kardashians hasn’t slowed down for a second since announcing her split from comedian Pete Davidson in August. Since, her schedule has been packed with interviews and events.

Kim even admitted she was taking some time out of the dating game during the Sept. 14 episode of The Late Late Show. There, she told host James Corden, “I just want to chill for a minute. I think I need some time to myself and to focus, finish school, all that.”