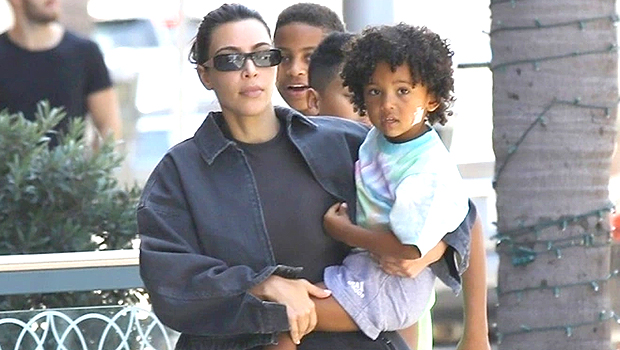 The mom and son sang a sweet duet to the inescapable song ‘We Don’t Talk About Bruno’ from the Disney hit.

Like so many parents across the country, Kim Kardashian can’t escape Charm and specifically the animated musical’s standout song “We Don’t Talk About Bruno.” The 41-year-old reality star and her son Saint West, 6, sang the viral hit together in a video that Kim shared to her Instagram story on Tuesday March 15. The two looked like they were having a blast bonding over the song.

In the video, Kim was letting Saint play with her phone, as he looked at himself with Instagram filters that turned his eye colors blue and then green, while the Charm song played in the background. Saint was adorable as he seemed like he couldn’t believe the filter turned his eyes to a different color. When the eye color switched from blue to green, Kim pointed it out excitedly, while Saint sang, “I have green eyes!” The last clip featured both Kim and Saint adorably singing the song into the phone together.

Charm has been a smash hit for Disney since it dropped in November 2021, and kids can’t seem to get enough of the instant animated classic. Kim isn’t the only star who’s shown love to the film! How I Met Your Father star Hillary Duff shared a video of herself singing the same viral song back in January. Even That 70s Show alum Topher Grace admitted that he might break a “no screens” rule to show his kids the movie, which stars his former co-star Wilmer Valderrama. The movie doesn’t seem like it’s going away any time soon either, as it netted three Oscar nominations, including for Best Animated Feature, Best Original Score, and Best Original Song (for “Dos Oruguitas”).

Other than Saint, Kim has posted tones of sweet videos with her kids, showing a love of music in many of them. The SKIMs founder lip-synced to yet another Charm song (“The Family Madrigal”) with her eldest daughter North, 8, in a sweet TikTok back in January. More recently, she donned emo makeup with North and her niece Penelope Disick, 9, to rock out to Machine Gun Kelly’s hit duet with Willow Smith “EmoGirl.”