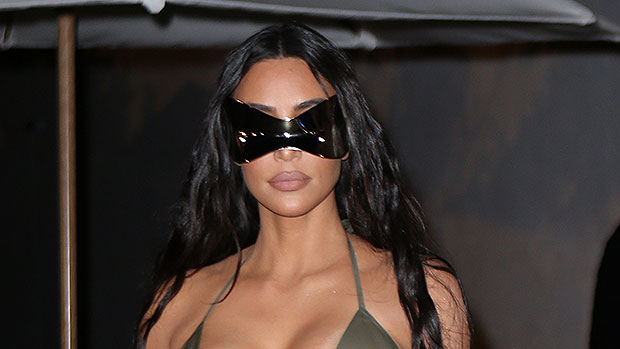 Kim Kardashian is known for keeping her curvy figure and flawless skin in tip-top shape, and now some fans know how she does it. The 41-year-old Kardashians star took to her Instagram Story on August 3 to share a photograph of herself receiving a laser treatment to tighten her tummy. “This is a game changer!!! I did Morpheus laser to tighten my stomach at @DrGhavami’s spa,” she wrote in white lettering over the snapshot. “I think this is my fave laser but it’s painful lol but worth it!”

Kim hopped back on her Instagram Story to flaunt her fit physique through a body composition test via the company, BodySpec. Over a photo of the company’s truck, Kim said they are capable of measuring bone density, body fat, and more all from the inside of the vehicle. “Takes about 7 minutes to get all the results and do a body scan,” she gushed as she gave fans a peek at the inside of the BodySpec van. The SKIMS founder then revealed that her results were super positive and determined she has bones that are “stronger than 93-97% of people”. Go Kim!

She also revealed that she dropped about 7% in body fat between last year and this year, as her body scan showed that on May 10, 2021, she had a body fat percentage of 25%, while on Wednesday, it measured as 18.8% . Kim was super impressed with her results and could be heard celebrating the reading behind the camera.

Kim’s posts about her skin tightening treatment and body composition test came just days after she came clean about how much her looks mean to her. “I care. I really, genuinely care about looking good,” she admitted to Allure for their August 2022 cover story. “I probably care more than 90% of the people on this planet. It’s not easy when you’re a mom and you’re exhausted at the end of the day or you’re in school, and I’m all of the above. I do my beauty treatments usually late at night. After everyone’s in bed, I’m doing laser treatments.”

The busy mom of four also revealed what work she’s had done to her face, which is apparently quite minimal: just Botox between her eyebrows. She also stated that she has “never” had filler in her cheeks or lips. “I’ve never had eyelash extensions. I’ve never done anything. I have a drop of mascara on today. I’ve never filled my cheeks. I’ve never filled my lips,” she told a skeptical interviewer.

Kim has certainly been showing off her glowing skin as of late, which makes sense with the June debut of her brand-new skincare line, SKKN. In fact, she and her dela momager Kris Jenner66, have both taken off all their makeup for the camera to show fans how they use products from her pricey line.

Kim announced her skincare line on June 1 — the same day The New York Times published an interview in which Kim said she would eat poop to remain youthful-looking. She also touted its premium ingredients in an Instagram post on June 11. “We put so much thought into each formula and chose the finest ingredients to help everyone’s skin look and feel its best. I can’t wait for you guys to experience the collection,” she wrote.