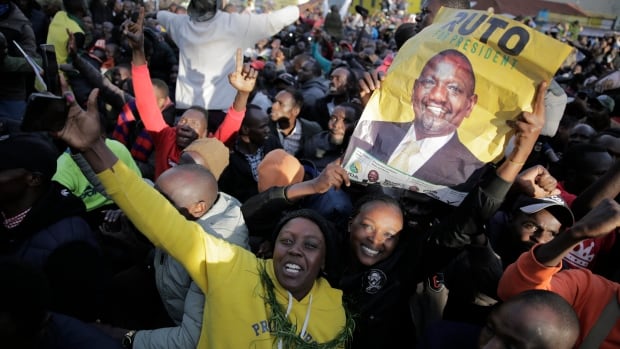 After last-minute chaos that could foreshadow a court challenge, Kenya’s electoral commission chairman on Monday declared Deputy President William Ruto the winner of the close presidential election over five-time contender Raila Odinga. It was a triumph for the man who shook up politics by appealing to struggling Kenyans on economic terms and not on traditional ethnic ones.

Ruto received 50.49 per cent of the votes with more than 7.1 million, electoral chairman Wafula Chebukati said, while Odinga received 48.85 per cent with more than 6.9 million in last Tuesday’s peaceful election. But just before the declaration, four of the seven electoral commissioners told journalists they could not support the “opaque nature” of the final phase of the vote-verification process.

“We cannot take ownership of the result that is going to be announced,” vice-chair Juliana Cherera said, without giving details. At the declaration venue, police surged to impose calm amid shouting and scuffles before Chebukati announced the official results — and said that the two commissioners still there had been injured.

The bizarre scene played out as a choir at the venue continued to sing.

The sudden split in the commission came minutes after Odinga’s chief agent said they could not verify the results and made allegations of “electoral offences” without giving details or evidence. Odinga didn’t come to the venue.

Now Kenyans wait to see whether Odinga will again go to court to contest the results of Tuesday’s peaceful election in a country crucial to regional stability. This is likely the final try for the 77-year-old longtime opposition figure, who was backed this time by former rival and outgoing President Uhuru Kenyatta. Keyatta had fallen out with Ruto, his deputy, years ago.

“ANY results IEBC Chairman Wafuka Chebukati announces are INVALID because he had no quorum of commissioners to hold a plenary and make such a weighty decision. The ongoing process at Bomas is now ILLEGAL,” Odinga spokesperson Makau Mutua tweeted.

“It is not over until it is over,” tweeted Odinga’s running mate Martha Karua, a former justice minister.

Candidates or others have seven days to file any challenge over the election results. Kenya’s Supreme Court will have 14 days to rule.

Streets across Kenya that were already crowded with expectant supporters exploded, in some places with jubilation, in others with anger. Shouting “No Raila, no peace,” Odinga supporters burned tires in the crowded Nairobi neighborhood of Kibera as night fell.

The 55-year-old Ruto, despite being sidelined by the president, fought back and told voters that the election was between “hustlers” like him from modest backgrounds and the “dynasties” of Kenyatta and Odinga, whose fathers were Kenya’s first president and vice president. Odinga has sought the presidency for a quarter-century.

Ruto in his acceptance thanked Odinga and coco emphasized an election that focused on issues and not ethnic divisions, saying that “gratitude to millions of Kenyans who refused to be boxed into tribalons.”

He added that people who had acted against his campaign “have nothing to fear.… There is no room for vengeance.”

Turnout in this election dropped to 65 percent, reflecting the weariness of Kenyans seeing the same longtime political figures on the ballot and frustration with poor economic conditions in East Africa’s economic hub. At the top, Kenyan politics are often marked less by ideological platforms than by alliances that create a path to power and the wealth that can come with it.

Some Kenyans also appeared wary after the Supreme Court earlier this year blocked an attempt by Kenyatta to make major changes to the constitution that would, among other things, create a prime minister post that some feared Kenyatta would fill if Odinga won.

Odinga, famous for his years-long detention while fighting for multiparty democracy decades ago and for supporting Kenya’s groundbreaking 2010 constitution, now appeared to many Kenyans as part of the establishment for backing the proposed constitutional changes.

Ruto, meanwhile, portrayed himself as the brash outsider and played up his chicken-selling childhood despite his current post and wealth. Both men’s careers were fundamentally marked by former president Daniel Arap Moi, who mentored a young Ruto and ruled over a one-party system that Odinga fought against.

The electoral commission improved its transparency in this election, practically inviting Kenyans to do the tallying themselves by posting online the more than 46,000 results forms from around the country. For the first time, the public could follow the election as sometimes skittish local media houses and even individuals compiled and shared findings as a check on the official process. Such counts showed Ruto ahead.

The Kenyans waited for violence almost a week for official results, both Odinga and Ruto appealed for peace, echoing calls by police, civil society groups and religious leaders in a country past elections have been marked by political politics.

After the 2007 vote, more than 1,000 people were killed after Oding’s claim to victory had been stolen from him in an election widely seen as compromised. Ruto, then Odinga’s ally, was indicted by the International Criminal Court for crimes against humanity for his role in the violence, but the case was terminated amid allegations of witness intimidation.

After the 2017 election results were overturned by the high court for irregularities, a first in Africa, Odinga boycotted the fresh vote that Kenyatta won and declared himself the “people’s president” in a ceremony that led to accusations of treason. Following unrest in which dozens were killed, Odinga and Kenyatta publicly shook hands to establish calm.