Julia Roberts is singing the praises of her longtime friend George Clooney.

In a new interview with The New York Times, Roberts, 54, admitted she leaned on Clooney while filming their new film together during the COVID-19 lockdown.

“The Clooneys saved me from complete loneliness and despair,” the Oscar winner said.

“We were in a bubble, and it’s the longest I’ve ever been away from my family. I don’t think I’ve spent that much time by myself since I was 25.”

The pair filmed their new rom-com Ticket to Paradise in Australia from November 2021 to February, but faced strict COVID-19 quarantine rules in the midst of the filming.

Unfortunately, this meant Roberts wasn’t able to see her husband Danny Moder or their children, teenage twins Phinnaeus and Hazel, 17, and son Henry, 15.

“When Danny and the kids did come visit, that meant they had to fly into Sydney and quarantine for two weeks by themselves before she could see them,” Clooney, 61, explained in the interview.

Clooney brought his entire family to set with him, since he and wife Amal are still raising their very young twins Ella and Alexander, who are five.

Roberts then revealed how quarantining with the Clooneys really went down.

“When we first got to Australia and we were all quarantining, you kind of go a little bit cuckoo,” she said. “I remember right around Day 11, I was like, ‘Who am I? Where am I? What is this room that I never leave?’ It’s a funny thing. I hadn’t really anticipated all that.”

“That’s why they invented alcohol,” Clooney chimes in.

Clooney replies, “That too.”

The pair give a little taste for readers into their famous chemistry they share. In one anecdote, Clooney reveals the daily routine he, Amal and his kids dele undertook with Roberts.

“We started in Hamilton Island, with all these wild birds, and Julia had the house down just below Amal and me and the kids,” he told The New York Times

The pair also hilariously opened up about why they decided to do a romantic comedy together in the first place.

“It somehow only made sense with George, just based on our chemistry,” said Roberts.

“We have a friendship that people are aware of, and we’re going into it as this divorced couple. Half of America probably thinks we are divorced, so we have that going for us.”

The pair also revealed they do in fact kiss in the film, but it wasn’t an easy feat for them.

“[There’s] one kiss. And we did it for, like, six months,” Roberts reveals. 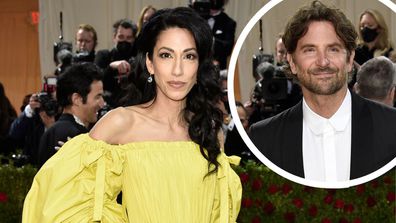