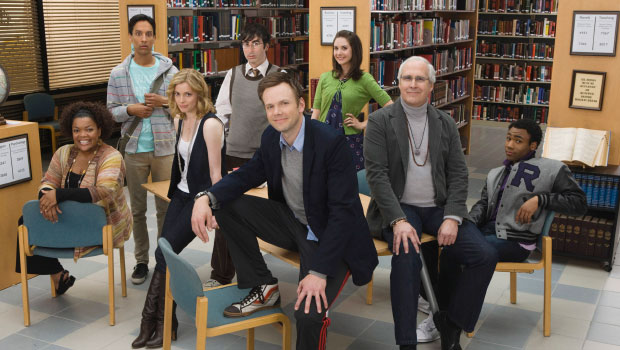 Community fans just got the best news ever. Joel McHale confirmed on Sept. 30 that to Community movie is happening, seven years after the beloved sitcom went off the air after six seasons. The show’s official Twitter wrote, “six seasons…,” and then Joel tweeted, “AND A MOVIE,” which is a reference to the full “six seasons and a movie” line that’s said in the show’s early seasons. Variety confirmed that the Community movie will stream on Peacock.

Joel is returning to the film alongside former co-stars Danny Pudi, Alison Brie, Gillian Jacobs, Jim Rash and Ken Jeongaccording to Variety. It’s unclear if Yvette Nicole Brown and Donald Glover are also returning, though Joel did tag both of them in his tweet when he announced the big news. creator Dan Harmon is executive producing and writing the movie with Andrew Guest. Joel is also an executive producer alongside Russ Krasnoff and Gary Foster.

Peacock and Sony Pictures TV secured the rights to the Community movie after “heavily competitive” negotiations, per Variety. Peacock has also secured non-exclusive rights to the all six seasons of Communitywhich are currently available on both Hulu and Netflix.

Joel awning HollywoodLife EXCLUSIVELY about a possible Community movie in May 2021, after the cast reunited for a virtual table read the year prior. “If you had told me a little over a year ago that there was a chance of a Community movie, I would like, ‘Yeah, maybe,’ but after that table read, we were like, ‘Oh, hey, look, we’re all here and we all like each other!’ ” Joel told us. “To make movies, you need — no matter how you slice it — you’re going to need a little bit of money to make it,” he also said.

Community debuted on NBC in September 2009, running for six seasons and bidding farewell on Yahoo! Screen in 2014 after a network change. The sitcom followed a group of loveable misfits and their misadventures at a community college in the fictional town of Greendale, Colorado.