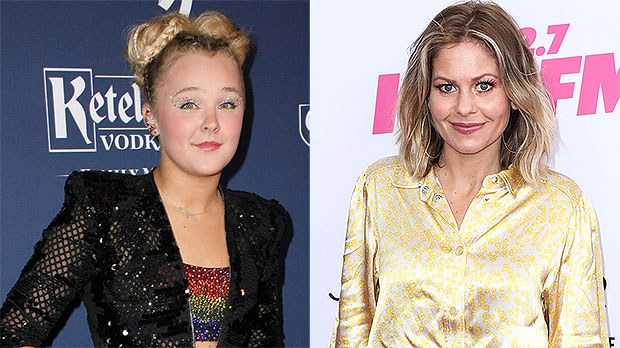 JoJo Siwa has confirmed what Candace Cameron Bure did to her 11-year-old self that made her slate Candace, 46, as one of the “rudest” celebrities she has met in a July 24 TikTok. “You know, I had a rough experience when I was little. I was 11, and I was a big, big fan, and I wanted to take a picture with her, and it wasn’t a good time for her,” the 19-year-old Dance Moms alum explained to Page Six on July 27, referring to Candace’s admission that she turned JoJo away after she asked for a photo with her at the red-carpet premiere of Fuller House.

The singer, dancer, and actress then went on to subtly defend Candance. “I will say because I had a bad experience, that doesn’t mean that she is an awful human,” she added. “I think it just was an inconvenient time for her, and little 11-year-old me was just so pumped up and so excited, but that doesn’t mean she’s the worst human ever.”

The Fuller House star continued on to say there is no bad blood between her and JoJo following the “great” conversation they had the morning of July 26. She also took the experience as a lesson. “And I think the lesson we can learn is to be mindful that no matter how many followers you have, you know, even a 10-second trending TikTok video can do damage because our words matter and our actions matter … we all influence the people around us, we influence people watching us on TikTok, we influence the people that we are with at home and to be mindful of what we do post even if it’s just kinda meant to be innocent and fun at the time,” she explained.

JoJo’s remarks about the surprising drama between her and the former teen star were quite short compared to the lengthy and seemingly heartfelt apology that came from Candace the day before. The apology, which was posted to Instagram, began with a clearly bothered Candace saying she was “shocked” to hear JoJo had such a sour interaction with her. She went on to explain what had happened and profusely apologized to the teen sensation. “I broke your 11-year-old heart. … Ugh. I feel crummy. JoJo, I’m so sorry,” she said. “Especially as a mom, it breaks my heart that I made you feel that way and I’m sorry to your mom, too, that I did that to her daughter because I know if anyone crosses my kids, you know momma bear comes out ,” she added.

Candace was immediately praised by fellow stars for the candid video. “you are officially my spirit animal! So eloquently put. I’m sitting here crying,” former Beverly Hills, 90210 star Tori Spelling commented under the video. “You are truly an inspiration! love u. xo” Bristol Palin even recalled her time meeting Candace under the video, and praised the interaction. “I ran into you outside hotel in NYC years ago, I was starstruck and had to say hi, you were one of the absolute KINDEST people I have ever met,” she wrote. Plus, Jenna Johnsonwho was JoJo’s Dancing with the Stars partner in 2021, left three heart emojis.

JoJo has not commented on the situation any further on her social media pages, but has remained quite active.