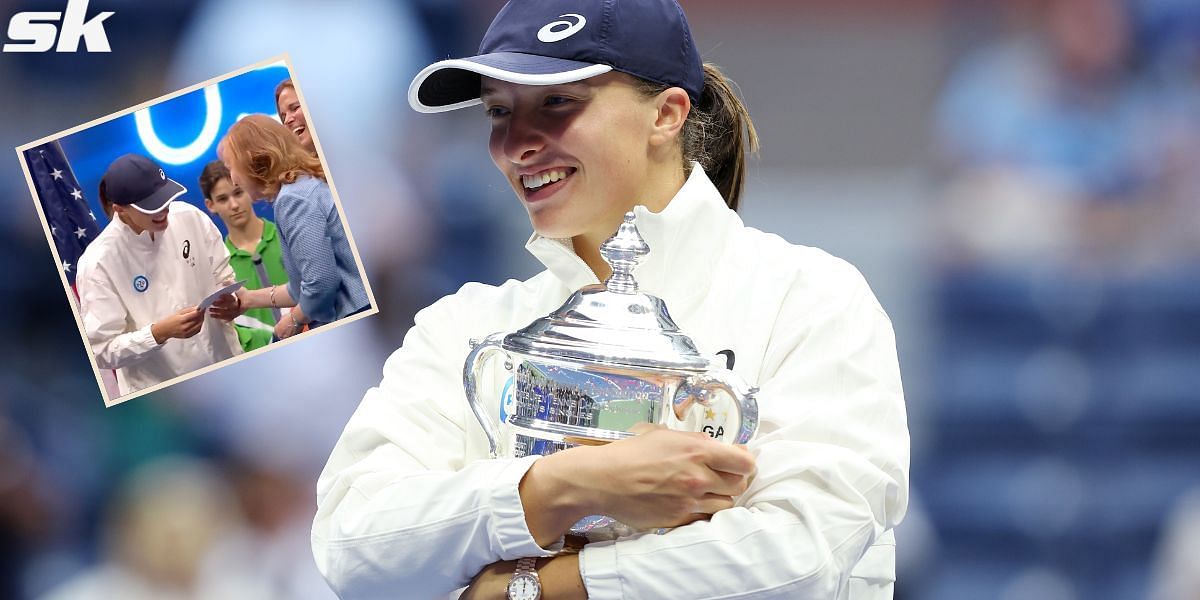 Amidst all the celebrations of winning her third Grand Slam title, Iga Swiatek showed her funny side during the trophy presentation in New York.

On Saturday, Swiatek beat Ons Jabeur in straight sets to capture the US Open title. She beat the Tunisian 6-2, 7-6 (5) at the Arthur Ashe Stadium to claim her second Major of the year and her third overall.

As the winner, the Pole was entitled to prize money of $2.6 million. Amidst all the pomp and celebrations, a representative from JP Morgan, one of the sponsors, presented her with a cheque. Swiatek was happy to receive a lightweight envelope and not bundles of cash.

“I’m glad it’s not in cash,” she said with a cheeky smile.

“If it wasn’t for them, I wouldn’t stand here” – Iga Swiatek thanks her team following 2022 US Open triumph

With her triumph in New York, Iga Swiatek became the first Polish woman to win the US Open title. It is her second Grand Slam title of the year following her Roland Garros triumph, and the third of her career, with the 2020 French Open her maiden Major win her.

Following the defeat of Ona Jabeur, Swiatek took time to thank her team for their contributions to her win.

“You know guys, how tough it was basically. And I’m pretty sure that I’m giving you sometimes such a hard time. You’re always the ones that are basically smarter and know better what to do even though I’m pretty stubborn. I’m pretty happy that I have you on my side and I have people who really know how to guide me. So if it wasn’t for them, I wouldn’t stand here. prepared. So, thank you guys,” she said.

The World No. 1 also stated that she entered New York without a lot of expectations and that she had a challenging time throughout the tournament.

“Honestly, I’m just not expecting a lot. Especially before this tournament. It was such a challenging time you know, coming back after winning a Grand Slam it’s always tricky even though Roland Garros was the second one. I really needed to stay composed and focus on the goals and for sure this tournament was really challenging, she stated.

Iga Swiatek also said that she was happy to increase the sport’s popularity in her country and that she’s trying to set a good example for others.

“I’m proud that tennis is getting more and more popular at home. Yeah, we’re trying to do our best to do to be good people and to be good examples,” she said.