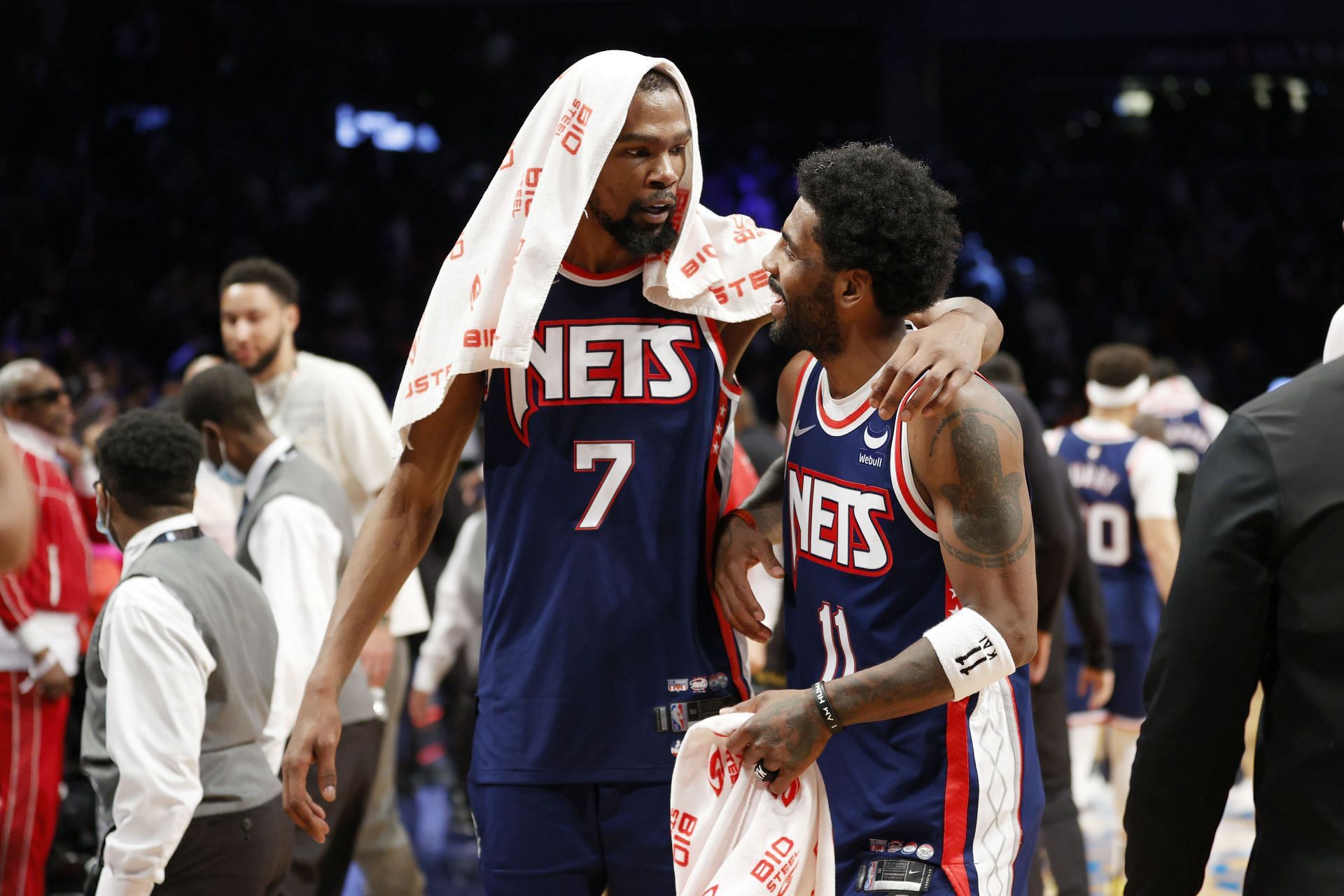 The close relationship between Kyrie Irving and Kevin Durant has been at the crux of everything that has happened to the Brooklyn Nets since 2019. KD didn’t want to sign for Brooklyn without “Uncle Drew” and the Nets have had to live with the results of that dynamic.

ESPN’s Nick Friedell, who covered the Brooklyn Nets’ Media Day’ reported the rumors about Irving and Durant. He said:

“It backs up with what I was told several times, even in the last couple of months. Kevin and Kyrie are very close, they have a very solid relationship. They are not always as close as it was made out to be publicly.

“And Kyrie acknowledged it, ‘I’m always gonna be happy for Kevin, I want what’s best for him. I want him to be here but if he wasn’t gonna be here and that didn’t make him happy in his basketball life then I had to deal with him going somewhere else.’”

During the offseason, Kevin Durant distanced himself from Kyrie Irving’s contract negotiations with the Brooklyn Nets. Although the Nets already knew KD’s take on the situation, the former MVP could still have influenced the outcome of the standoff.

When “Uncle Drew” eventually opted into the final year of his deal, KD stunned the NBA by requesting a trade.

Nick Friedell added that ultimately Kevin Durant decided what was best for his career with or without Kyrie Irving.

“Kevin felt like he had to do what was best for him.”

Shams Charania: “Kyrie Irving is fully supportive of Kevin Durant’s decision today. He opted in on Monday, but he knew this was a possibility.”

Shams Charania: “Kyrie Irving is fully supportive of Kevin Durant’s decision today. He opted in on Monday, but he knew this was a possibility.”

Once KD’s trade request went viral, reports surfaced that Irving told his people that he was committed to the Nets with or without Durant. Friedell noted that what happened in the offseason was evidence that Brooklyn’s superstars were not in step the whole way through.

Kevin Durant’s 4-year extension will kick in once the 2022-23 NBA season starts. He will be the face of the Brooklyn Nets for the foreseeable future.

Kyrie Irving, on the other hand, looks set to become an unrestricted free agent by the end of next season. GM Sean Marks reported that the team and the mercurial point guard have not reached a middle ground to extend Irving’s stay.

If Brooklyn doesn’t change its stance despite potentially winning the championship, Irving could walk out of the Barclays Center.

“At the end of the day, we’re happy that Kyrie is back here…listening to his press conference that he had this morning, and my takeaway from that is that he’s committed”

“At the end of the day, we’re happy that Kyrie is back here…listening to his press conference that he had this morning, and my takeaway from that is that he’s committed” – Sean Marks discusses Kyrie Irving’s contract and what that means for the player this season https://t.co/wzBAquI2RL

The Brooklyn Nets have certain issues to address, such as their big man depth and rebounding. They can’t simply rely on Ben Simmons to do that due to his back issues.

Kyrie Irving and Kevin Durant have largely faced criticism since signing for the Nets. With possibly only a year left in their partnership, they could silence their critics by giving the franchise its first NBA championship.