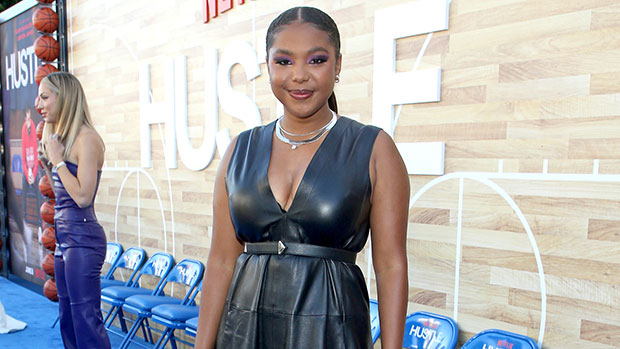 hustle is one of Netflix’s biggest hits of the summer. The film follows an NBA scout, played by Adam Sandlerwho comes across basketball’s next big thing, played by real-life NBA player Juancho Hernangomez. Jordan Hull plays Alex, the daughter of Adam and Queen Latifah’s characters. HollywoodLife spoke EXCLUSIVELY with Jordan about her first-ever film role and being amongst the “greatest of the greats.”

Jordan grew up watching Adam and Queen Latifah on the big screen. Despite being Hollywood juggernauts, they welcomed Jordan with open arms. “We met on Zoom. It was super, super cool. It was just us and the director just getting to know one another, and it was a huge learning lesson because they were just so dang charismatic and friendly and really funny and conversational. Even though we even met virtually on Zoom, when I finally got on set with them, I already felt like 10 times more comfortable,” Jordan said.

While working alongside her onscreen parents, she learned that “every actor has a different process” when it comes to their work. “But they both have this in common, which was their ego was totally at the door,” Jordan admitted. “They just brought themselves as very, very giving scene partners. I think to be a comedian or dramatic actor, you have to really be generous in that way. But specifically with Adam, being such a talented dramatic actor, I think it’s because of his generosity in his craft and all that stuff. He’s very prepared, but then when you doing get there, he’s not his own thing”

She added, “There’s a quote in the movie that’s like ‘a good player knows where they are on the court and a great player knows where everyone else is.’ He’s kind of like that as an actor. They were good and they knew where they were at. What made them exceptional is that they’re aware of the other people on the scene and the crew. They just had an open vision about everything.”

Jordan isn’t the only one having a breakout moment in hustle. Utah Jazz player Juancho wows with his performance as Bo Cruz. “To say I’m impressed is a huge understatement. To be in Juancho’s position and to handle it so gracefully and with so much integrity, but also being just objectively a great performer, is a tall order. He does it very, very well,” Jordan said.

The young actress learned so much by example from Adam and Queen Latifah. “She had a lot of really wise words about working and how work gets you more jobs, and she just listens to such great music wherever she goes,” Jordan told HollywoodLife about Queen Latifah. “It was really, really jarring because I’m a big fan of music. I like to play instruments and stuff like that, so just seeing the way that she and Adam had a great intersection of music and acting and how they fit into one another was really cool. I’m gonna take that with me to every set now.”

Jordan admitted that she created a vision board and declared that in “one year I want to do one play, one TV show, and one movie. And then I kind of did that this year and last year. To be able to be a part of three really strong projects… The L word is something that was my first gig. The people there just had such a high standard of what it means to conduct yourself on set, the type of people that need to be represented in front and behind the screen, so to go for that and then to go to a Netflix film was just …that’s what you dream of.” hustle is now streaming on Netflix.