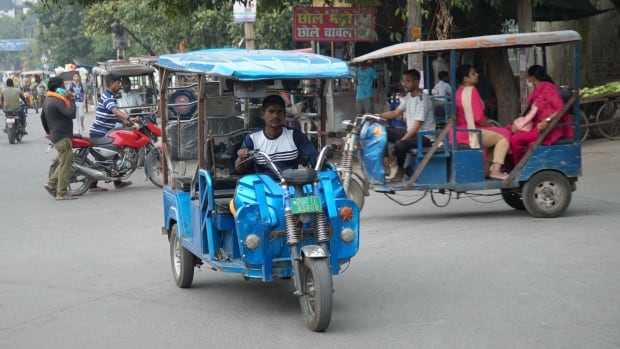 A faded battery-powered rickshaw weaves in and out of traffic in New Delhi’s northwestern Jahangirpuri neighborhood on a weekday morning, looking for passengers before sputtering into a narrow space in a row of brightly-coloured three-wheelers to charge its dying battery.

Behind the wheel is Suman, a 36-year-old mother of four, who takes pride in her chosen profession. Suman, who like many Indians goes by only one name, fought against the wishes of her husband and extended family to drive an e-rickshaw to provide for her daughters, who ranged from four to 18 years old.

“I told them that I don’t care what anyone says, I need to drive to give my daughters a better life,” said Suman.

“I don’t want my girls to have the same fate as me. I want them to get an education,” she added. “If I have to drive this rickshaw for that to happen, I will.”

Suman is one of many drivers clogging the streets of India’s capital region who see the e-rickshaw as an opportunity to earn more money and be their own boss, while environmental groups and the Indian government view the steep rise in low-cost electric vehicles as a key tool in the country’s fight to reduce carbon emissions.

“The best thing about an e-rickshaw is that you are not working under someone,” Suman told CBC News. “You can make some money, then take a break when the kids need to be sent to school.”

This is India’s EV revolution, a messy and at times chaotic push that has grown organically over the last decade in the Delhi area and several northern Indian states, which have seen the rapid proliferation of largely unregulated e-rickshaws, some of which are now available to buy for less than $1,500.

It’s a homegrown, people-driven model for a green mobility shift that relies heavily on two- and three-wheeled electric vehicles — one that many experts say could serve as a template for other developing countries that are trying, like India, to fight climate change and crippling air pollution.

“If you are looking to embark on a mobility transition, it’s probably better and wiser to look at what’s the path of least resistance,” said Gagan Sidhu, director of the Center for Energy Finance, housed within the Council of Energy, Environment and Water , a New Delhi-based think tank. “Which means don’t necessarily start at four wheelers, start at the cheaper end of the spectrum.”

There are roughly 1.75 million electric three-wheelers in India, according to industry data, although the current figure is likely higher since many are not registered or tracked.

In the fiscal year ending in March 2022, some 430,000 electric vehicles were sold in India, more than three times as many as the previous year. The vast majority, 95 percent, were two- and three-wheelers, according to data compiled by the country’s Federation of Automobile Dealers Associations.

Electric vehicles are still a tiny percentage of total automobile sales but that proportion is growing fast, with EVs capturing more than five per cent of the market in August of this year, up from two per cent in 2021.

On the ground, Ishaq Pradhan has seen the growth firsthand.

He has spent the last 10 years running an e-rickshaw charging station, perched at the side of a Delhi road, with electric cords stretching over a ditch filled with water to reach the precariously hung charging ports on a nearby concrete wall.

Demand for his electricity has doubled, and the number of new drivers keeps soaring.

“A person who would make money as a daily wage worker before is now driving an e-rickshaw,” Pradhan said, because the electric three-wheelers are far cheaper to buy than those that run on gas or diesel.

“The average income is higher and you can make ends meet more easily which is why everyone likes it,” he added.

What started as a consumer-driven push had the country’s auto industry initially playing catch-up to harness the potential. At a large exposition staged on the outskirts of Delhi in September, booth after booth showcased the latest models from manufacturers of electric vehicles, charging docks and batteries.

“The adoption rate is so high that the future of electric in India is really good. Everyone is adopting,” said Abhimanyu Singh, in charge of northern India corporate sales for Mahindra, which makes rickshaws and other types of electric vehicles.

“The running cost of the vehicle is very low and also, it is emission free. So all of these things combined, it means a very good value case.”

India’s government also sees the value in low-cost electric vehicles, embracing them as part of its wider strategy to reduce carbon emissions. It has prioritized incentives for those buying greens, including a tax cut and subsidies for certain EV models.

The ambitious aim is to have electric cars make up 30 percent of all automobile sales by 2030, even though current sales of more expensive four-wheelers are dismally low.

“There are only two four-wheeler models out there [that qualify for a subsidy] and the charging infrastructure across India is sorely lacking,” said Sidhu, the energy finance expert.

The government is looking to fix that issue, offering business subsidies to increase the number of public charging stations, currently sitting at 934. That pales in comparison to China’s more than two million charging locales.

Indian officials have also drafted policy aimed at pleasing drivers of e-rickshaws, with the goal of expanding the number of battery swapping stations, which allow drivers to exchange discharged batteries with newly-charged ones in order to get back out on the road quickly.

The government is committed to promoting the electric transition, even if transportation only accounts for about 10 percent of India’s total emissions, a far smaller percentage than countries like Canada, where it’s 24 percent.

A lot depends not only on how India manages its transition to electric vehicles, but also on how the country tackles its more polluting sectors — such as agriculture and power-generation — which produce far higher emissions than transportation.

It’s a task with global implications, since India is now the world’s third largest emitter of greenhouse gases, lagging behind only China and the United States, even though its per capita emissions are far lower.

With a rapidly growing economy and acute energy demands, India is adamant it will continue to produce coal, the dirtiest of fossil fuels, for the foreseeable future — even as the country invests heavily in renewable energy sources like solar and wind.

Nearly three-quarters of the country’s power is generated by coal, leaving the end sum of all the e-rickshaws and other battery-powered vehicles on the roads decidedly less green.

Despite the reliance on coal, experts point to India’s electric two- and three-wheeler expansion as a strong local solution, a path that grew spontaneously from the ground up, with little initial support from the government.

“If you look at the figures for states like Tripura and Assam, almost 100 per cent of the electric vehicles sold there were actually e-rickshaws,” said Sidhu.

“We’re still trying to figure out exactly why.”

For Suman and her fellow e-rickshaw drivers jockeying for space by the side of the road in Delhi, the environmental impact of their chosen work couldn’t be further from their minds.

When speaking about the benefits of her vehicle, the young mother mentioned her bolstered confidence from driving on her own, the ability to work flexible hours, the increased earning potential and lower costs — but not the rickshaw’s lower carbon footprint.

She said it’s those economic advantages that attract all of the drivers she knows to EVs, and there are unintended consequences that have come with the rapid growth in e-rickshaws in Delhi: more competition.

“There are way more rickshaws on the street so there isn’t much work left,” she bemoaned. She’s had to find another job to supplement the few hours she and her husband dela now spend driving the family’s e-rickshaw.

“It used to be better,” she said. “We could make more money.”