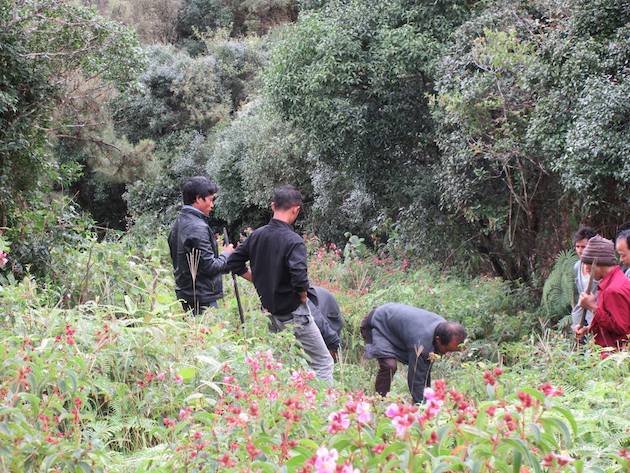 Sep 28 (IPS) – Some ten years ago, Sheemanto Chatri, a 39-year-old farmer hailing from India’s northeastern state of Meghalaya, was reeling with distress. The unseasonal rainfall had washed away all the crops he had cultivated after year-long labor in his far-off hamlet.

In 2013, this farmer had sowed a ginger crop on his half-acre land and was hoping for a profitable yield. However, providence had willed otherwise. In September that year, unseasonal rains wreaked havoc on Sheemanto’s village, destroying his crops beyond repair.

“We had not anticipated this. We were praying to God to grant us a good yield. But the rains destroyed everything – our hopes and our livelihood,” says Chatri.

Another farmer, only identified as Marwin, shares a similar predicament. He said that he had grown potatoes on his farm and was planning to sell them in the open market to settle a loan from the bank. However, says Marwin, the drastic change in the weather pattern affected the farmers most in the village.

“At times, it is drafted and at times unexpected heavy rains. All this is unprecedented to the core. It affected our livelihood and would hit our families hard,” says Marwin.

He added that the entire village had been incurring losses in farming due to such an unprecedented situation, putting people in dire straits in more ways than one.

“We had absolutely no clue why this was happening. We even performedal puja (prayers) and offered sacrifices to our congregation Gods, but nothing happened,” Marwin said.

According to another farmer, Arup Chater, a team of local NGOs with researchers came to the village in November 2014 and assessed the crop losses. The team also studied the pattern of the weather changes in the area and said they believed deforestation was responsible for the situation.

After the team visit, the villagers – men and women, young and old congregated at an open ground to discuss the remedial measures. They realized how the ruthless chopping of trees from the nearby forests had affected their livelihoods.

“At the onset, we didn’t understand that any such thing would happen to us if we allowed the axing of trees from the nearby woods. Now we understood that nature works in unison, and it was now affecting our lives so drastically,” Chater told IPS.

At this moment, the inhabitants of this village decided to grow a forest.

The village head made a general announcement asking the households in the village to provide saplings so they could be planted in the community forests.

“A kind of roster was intended that divided works amongst the villagers. Every day, duties were distributed among the households for toiling in the woods, tending it with natural fertilizers, irrigating the saplings, and taking care of the newly sown plants. Three labor groups were created – each given a task of their own: “longkpa” (men), “longkmie” (women), and “samla”(youths),” says Mattheus Maring, the headman of the village.

He adds that at present, there are more than 4000 saplings that are growing.

“This forest was our only hope of not witnessing the impact of climate change. This has grown into a full forest,” Maring told IPS. “There is the chirping of birds and the sounds of leaves everywhere. Gradually, the climatic conditions and water scarcity have subtly begun to improve.”

He says he believes that this forest building has made nature “kind.”

“For the last couple of years, farmers haven’t complained about losses. They get adequate rains on time and water supplies too. The economic conditions of our village have also begun to improve,” says Maring.

He adds that a regular water supply was created by planting 2,000 each of the Michalia champaca (Diengrai), Duabanga grandiflora (Dieng Mului), and 250 Drimy carpus (Dieng Sali) seedlings.

To enhance the water source coming from the roots of the trees, there was significant participation from the “longkpa” (men), “longkmie” (women), and “samla” throughout the day. To prevent wildfires, they make sure to clear and clean it. This activity aims to preserve the water supply for future generations while transforming it into a Nutri Garden by growing traditional veggies or wild delicacies.

Due to climate change, groundwater supplies, rivers, dams, streams, and others are all under stress. In India, rain-fed agriculture occupies 65% of all arable land, highlighting the industry’s vulnerability to water constraints. Since less groundwater is being used for agriculture due to depletion levels, several states of the country are already experiencing water shortages.

Recent studies have demonstrated that climate change-induced global warming enhances the monsoon’s oscillations, causing both brief bursts of intense rain and protracted dry spells. Since 1902, 2022 has experienced the second-highest number of severe events – a frightening scenario that gave rise to droughts and floods.

In India, as per government data, monsoon rains decreased in frequency but increased in intensity in the second half of the 20th century. These extraordinary shifts are severely impacting India’s hundreds of millions of food producers and questions, raising questions about food security.

However, the inhabitants of this northeastern village are optimistic that their hard work will yield the results – if not today, then tomorrow for sure. “We will not allow the chopping of the trees as we used to in the past. We will be vigilant now and understand that nature is a two-way street. We have to tender it with care to expect it to care for our lives in return. This community forest will save us for sure and will make our lives, the lives of our children better in more ways than one,” says Maring. IPS UN Bureau Report

Hard Hit By Climate Change, Villagers Raise a Forest on Their Own, Inter Press ServiceWednesday, September 28, 2022 (posted by Global Issues)