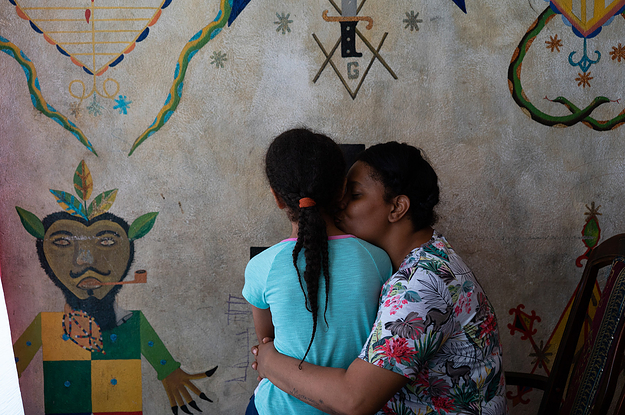 Soon, Appoline found herself sitting across from Mario Joseph in his office, in an unmarked building along one of the capital city’s narrow, winding streets. By then, Joseph, along with the US-based Institute for Justice and Democracy in Haiti, had grown accustomed to fighting the UN: They had filed a class action lawsuit in a US federal court on behalf of victims of the cholera epidemic, a case they lost when the court upheld the UN’s immunity from damages.

Joseph, 58, has worked some of the country’s most emblematic human rights cases, representing victims of the Raboteau massacre and of former dictator Jean-Claude Duvalier. He grew up in a house with no electricity or running water and believes many of the injustices committed in Haiti are a result of racism and imperialism, endemic not just among the outsiders who interfere in the country, but within the Haitian government as well.

He took Appoline’s case and began putting together a file for Cortez. In August 2016, Joseph’s law firm sent legal notifications to MINUSTAH informing them that they planned to file child support suits and requesting information on the alleged fathers, including about any investigations related to paternity cases by the UN’s Conduct and Discipline Unit and the results of DNA tests, some of which had been submitted to the organization as early as 2014. The response, said Joseph, was opaque and incomplete. They did not provide details on internal investigations into the claimants’ cases or certification that the peacekeepers’ immunity did not prevent these cases from moving forward in Haitian courts.

In December 2017, Joseph filed claims on behalf of 10 women in courts across Haiti.

“They say they’re promoting human rights, yet they’re violating ours,” Joseph said of the UN.

A UN spokesperson told BuzzFeed News that the organization has provided “documentation and information to the mothers as well as to the national authorities of Haiti,” and that 31 Haitian women and 36 children are receiving assistance that “varies in accordance with their individual needs” and includes funds for the upcoming school year.

The foreign ministry, which is the entity that corresponds directly with the UN, has kept Joseph on the sidelines, he said, including holding meetings with the women without having their lawyers present. Claude Joseph, who initially took over as prime minister after Moïse’s assassination and is now serving as foreign minister, declined an interview request from BuzzFeed News.

The women’s cases have largely stalled in their respective courts. Mario Joseph thinks part of the problem that judges are reluctant to rule against the UN or its member countries because many of them have received training from the UN or are hoping to get a job there one day.

During an interview, Bernard Saint-Vil, dean of the Court of First Instance in Port-au-Prince, initially said the fear of reprisals by the UN “may also be a factor” in the delay of these cases but then backtracked, saying judges must apply the law. Sitting in his office a few blocks from the National Palace, which was partially destroyed during the 2010 earthquake and never rebuilt, Saint-Vil clarified that pressure for the cases to move forward needs to come from the foreign ministry.

After nearly four years, only one judge — in the case of Jui — has issued a favorable judgment for a woman filing a child support claim against a UN peacekeeper. But because it is nearly impossible to enforce the ruling in Uruguay, Joseph said that all he can do now is tell other UN member countries about the ruling in hopes they increase diplomatic pressure.

Some of the women try to track down their children’s fathers themselves. On Feb. 8, 2020, Appoliner wrote to Cortez’s son, Jorge, on Facebook Messenger: “I’m an 8-year-old child. I want to meet Marcelo Antonio Cortez, my father.”

The following day, Jorge wrote back: “What do I have to do with this? Find him and write [to] him.”

A few weeks later, Appoliner messaged him again. “Your father had a child with me, look at the photo,” and attached a photo of Dominic. The following month, Jorge responded: “I spoke to him and he says you’re lying.”