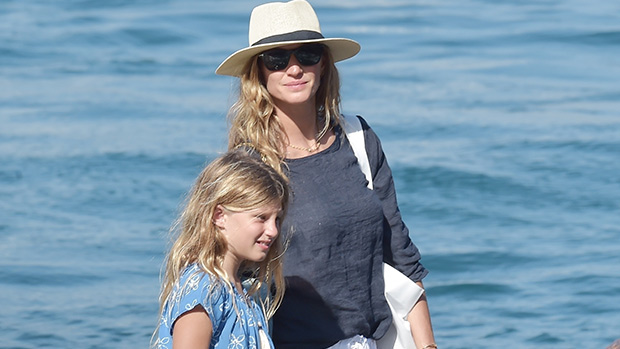 Gisele Bundchen42, spent time with her daughter Vivian9, amidst alleged drama in her marriage to Tom Brady, 45. The Brazilian supermodel took her youngest child shopping in New York City on Thursday, September 15, in THESE PHOTOS. Gisele dressed casual in a white T-shirt and blue jeans, with a green sweater tied around her waist. She also rocked a gray baseball cap and styled her ombré hair in a back ponytail.

Vivian held hands with her mother as the pair strolled through the Big Apple’s West Village neighborhood. The 9-year-old wore a black T-shirt with a purple bird graphic, plus a pair of black sweatpants and pink flip flops. The mother-daughter duo enjoyed girl time as they visited some stores in the area.

Gisele also shares son Benjamin12, with Tom, who has another son, jack15, from his previous relationship with actress Bridget Moynahan. After over 13 years of marriage, Gisele and Tom have apparently hit a rough patch in their relationship, after the NFL superstar changed his mind about retiring from professional football. There’s been “tension” in the marriage over Tom’s decision, sources previously told HollywoodLifeand Gisele and Tom are now reportedly “living separately” as they try to fix things.

“Gisele would never want Tom to give up his dreams and his passion for her and the kids because she knows how important football is to him,” an insider told HL, before adding, “but he’s made promises to her that he’s broken and she’s having a very hard time navigating her emotions about this whole ordeal. They made a deal when he would withdraw and she feels lied to him at this point.” Tom announced his decision to return to football in March 2022, less than one month after he declared that he was finally retiring.

Reports of a feud between Tom and Gisele began to emerge after the quarterback skipped out on training camp with the Tampa Bay Buccaneers back in August, citing personal issues. Gisele apparently “took some time” to herself by temporarily leaving their Tampa home to stay in Costa Rica. She did not attend Tom’s away game against the Dallas Cowboys on Sept. 11, though she did vocalize her support for her spouse on social media. “Let’s go Tom Brady!” she said on Twitter before the game, which the Bucs won 19-3.