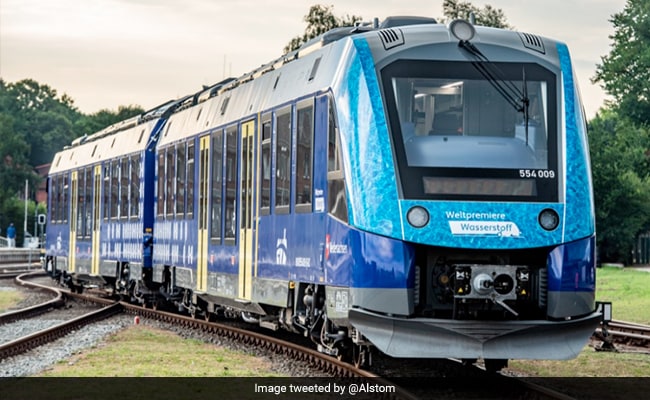 These hydrogen-powered trains have replaced diesel trains on the 100km (60 mile) railway.

Germany inaugurated the world’s first hydrogen-powered train on Wednesday. With this initiative, the government is opening the door for more environmentally friendly travel, said a report from CNN.

The route in Bremervorde, Lower Saxony, will be solely served by 14 Coradia iLint trains, powered by fuel-cell propulsion technology, the report further said. An agreement of 93 million euros has been signed between the railway’s owners, Landesnahverkehrsgesellschaft Niedersachsen (LVNG) and Alstom, the producer of these trains, according to CNN.

“Emission free mobility is one of the most important goals for ensuring a sustainable future,” said Henri Poupart-Lafarge, Alstom’s CEO, in a statement.

Five of these 14 trains have made their debut on Wednesday. They will progressively replace the route’s 15 diesel trains by the end of the year. Just one kilogram of hydrogen fuel is equivalent to approximately 4.5 kilograms of diesel fuel.

These hydrogen-powered trains have replaced diesel trains on the 100km (60 mile) railway that connects the cities of Cuxhaven, Bremerhaven, Bremervoerde, and Buxtehude near Hamburg.

The project also includes the Elbe-Weser Railways and Transport Business (EVB), which will be responsible for running the trains, and the gas and engineering company Linde.

The trains emit no pollution and produce little noise, emitting just steam and evaporating water. They have a 1,000-kilometre (621-mile) range, which means they may operate on the network for a full day on a single tank of hydrogen, reported CNN.

The hydrogen filling station has already been installed along the route. The trains may reach speeds up to 140 kmph (87mph).

Despite ongoing supply issues, it is a “world premiere” and a big step forward for green rail transportation, said Al-Jazeera.