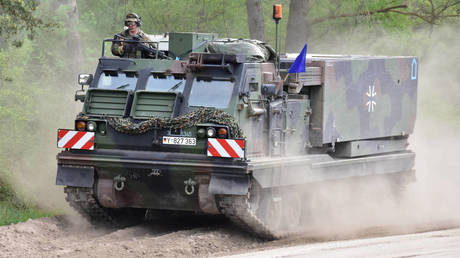 Berlin is allowing a German company to produce as many as 100 self-propelled howitzers for Ukraine, according to Der Spiegel

German arms manufacturer Krauss-Maffei Wegmann (KMW) has struck a deal with the Ukrainian government that would see the firm produce and supply Kiev with as many as 100 PzH 2000 self-propelled howitzers, Der Spiegel reported on Wednesday, citing a company representative. Berlin approved the sale in just two days, the paper said.

Kiev had asked KMW if it could purchase military equipment directly back in April, Der Spiegel said, adding that the arms manufacturer “immediately” made a relevant offer to Ukraine and filed for a PzH 2000 production license from the German government on July 11.

According to the company’s spokesman, the German Economy Ministry led by Robert Habeck greenlighted the sale just two days later on July 13, the newspaper reported. The spokesman also said the arms deal was worth €1.7 billion ($1.72 billion). The value of this single contract is almost triple the cost of all the arms Germany has sent to Ukraine since the start of the Russian military operation. Berlin’s military aid to Kiev has accounted for some €600 million ($607 million) to date, according to government data.

Kiev, however, will not get all the artillery pieces right away since KMW first needs to produce them. According to Der Spiegel, the manufacturing process is expected to take several years, even though the company said it would begin production “immediately.”

Berlin has not officially confirmed the approval of the deal. Instead, government officials told the paper they were “in close contact” with the industry and international partners on the issue of Ukraine’s “long term” military needs. Der Spiegel reported that KMW had only received government clearance for the production of the howitzers. Berlin will have to greenlight their sale separately once they are ready, the paper added.

The news came just a day after Berlin confirmed sending another batch of heavy weapons to Kiev. The shipment included three Mars-II multiple-launch rocket systems, as well as three PzH 2000 howitzers from the stocks of the German Army, the Bundeswehr. Defense Minister Christine Lambrecht warned in July, however, that the capacity of the army stocks is limited when it comes to sending weapons to Ukraine.

Kiev has also just received five of 30 self-propelled ‘Gepard’ anti-aircraft guns that have been promised by Berlin. The rest are expected to arrive between the end of July and the end of August.

Germany has previously supplied Ukrainian forces with thousands of portable anti-tank and anti-air missiles, it has thousands of anti-tank mines, as well as millions of rounds of ammunition. However, Kiev and even the former ambassador to Germany have still repeatedly criticized Berlin for what they called reluctance to send military aid to Ukraine and the slow pace of Ukrainian deliveries.