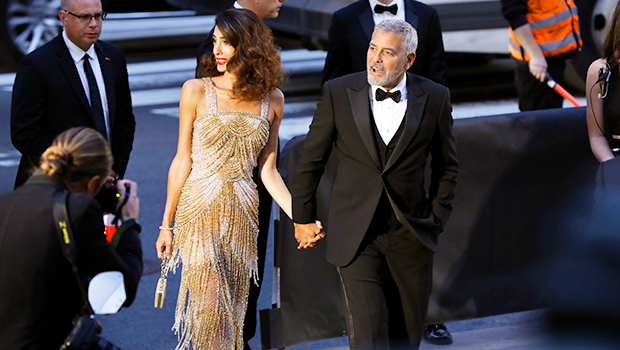 George and Amal Clooney had a date night at an event hosted by their Clooney Foundation for Justice. The A-list couple stepped out for the Albie Awards at the New York Public Library on Thursday night (Sept. 29), where George, 61, looked so handsome in a black tuxedo with a bowtie, while Amal, 44, stunned in a gold Versace gown. The pair happily cuddled up to each other as they posed for photos on the red carpet.

The Albie Awards honor a select group of people, including journalists and human rights leaders, who devote their lives to justice. George and Amal welcomed a slew of fellow A-list stars to the event, including Meryl Streep, Dua Lipa, Bruce Springsteenand George’s Ticket to Paradise co-star Julia Roberts. On the red carpet, George Told people that he “couldn’t be more proud” of his wife for getting journalists out of jail around the world.

George and Amal’s latest red carpet appearance comes after they celebrated their eighth wedding anniversary on September 27. The couple did an interview with Gayle King on CBS Mornings that day and George revealed that he’s “never had an argument” with Amal since they got married. “That’s sort of the whole secret to it. It’s just been easy,” the Oscar winner said. “Like the easiest thing we have done in our lives thus far. We’ve never had an argument.”

“I think that it’s 99 percent luck just to meet the right person,” Amal added of her fairytale romance with George. “And I think the one thing we would take is to not be cynical, just to be open, and I was surprised that you were not cynical or guarded at all and things just moved very quickly.”

After years of being a bachelor, George proposed to Amal in 2014, and they tied the knot in September of that year. Amal’s pregnancy was revealed in Feb. 2017, and the couple welcomed twins, Alexander and she, that June. George and Amal have made a point to keep their children out of the public eye over the years.

George Clooney’s Kids: Everything To Know About His Adorable Twins, Alexander & Ella