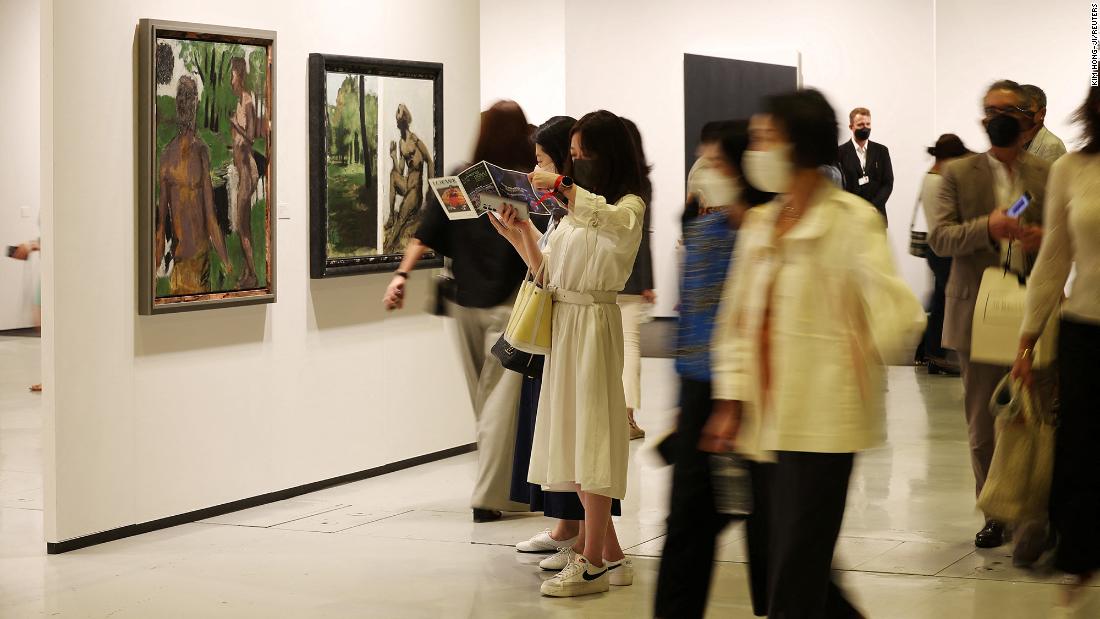 With its thriving local gallery scene and a growing class of affluent collectors, South Korea has long been considered one of the art world’s sleeping giants. The announcement that a major art fair, Frieze, would launch its inaugural Asian edition there may have surprised some, but it was the culmination of decades of growth.

This week, the jet-setting gallery world has descended on the capital Seoul, which welcomed visitors with a packed schedule of new exhibitions and cultural events. The four-day fair sees over 110 galleries from 20 countries vying for collectors’ attention at an exhibition center located in the upmarket Gangnam district.

“It’s a real validation of the strength of the arts scene, not just in Korea but in Asia,” Frieze Seoul director Patrick Lee told CNN on Friday, the fair’s opening day.

“Seoul is a very dynamic place with a strong history and appreciation of culture not just in art but in music, design and fashion,” he added. “And really the world is just becoming exposed to it.”

Borne from a magazine of the same name, Frieze launched in London in 2003 before expanding to New York in 2012 and Los Angeles seven years later. At its Seoul debut, Western heavyweights like Gagosian and Hauser & Wirth are joined by leading Asian galleries, while the event’s Focus Asia section spotlights 10 regional galleries that opened in or after 2010.

“(The fair) provides an opportunity to expose the Western world to what’s here in Asia and vice versa,” said Lee, adding over 30% of participating galleries from Asia.

The event marks a significant moment for an arts boom. Amid a wider drive to promote cultural exports like K-pop and TV shows like “Squid Game,” new president Yoon Suk Yeol’s government recently pledged 4.8 trillion won ($3.5 billion) in support of K-culture content over the next five years.

Several major galleries have also established Seoul outposts in the past two years, including Thaddaeus Ropac, Pace and Gladstone. Those already based in the city are meanwhile expanding their presence, with French gallery Perrotin this week opening its second location in the capital and Lehmann Maupin relocating to a new two-story space in the chic Hannam-dong neighborhood.

The latter gallery’s co-founder, David Maupin, said the arrival of a fair like Frieze was a “natural evolution” of the Korean art market’s growth.

“Collectors here have an openness to engage with artists — and to buy and talk about art that doesn’t necessarily have auction records,” said Maupin, who represented several major Korean artists, including Lee Bul and Do Ho Suh, before opening his gallery’s Seoul outpost in 2017. “Their collecting habits come out of connoisseurship, interest and passion.”

Asia’s strict Covid-19 policies have posed huge challenges to its art market — and to an industry that still likes to conduct a lot of its business in person. The continent’s largest art fair, Art Basel Hong Kong, has seen participation significantly shrink due to the city’s strict quarantine rules. Restrictions have largely been lifted in South Korea, however, with overseas visitors only subjected to a single mandatory PCR test upon arrival.
While Hong Kong is still considered the art market’s regional hub, South Korea’s developed infrastructure and low taxes — and in some cases, tax exemptions — on art also make it an attractive place to do business. And the country is home to a growing number of wealthy collectors, accounting for 2% of contemporary art sales in 2021 (placed fifth after the US, China, Britain and France), according to UBS and Art Basel’s latest Art Market Report.

There has been growing international interest in Korean works, too. Abstract paintings from the country’s post-war Dansaekhwa (or “monochrome painting”) movement can now fetch millions of dollars at auction. And one of the things that makes South Korea a good place to do business, Maupin said, is not necessarily the arrival of international art institutions but the vibrancy if its local scene.

South Korea’s rapid ascent is not without teething problems. The Galleries Association of Korea has complained that the recent abundance of sales held by the country’s auction houses is damaging young artists by creating “excessive and frequent price fluctuations,” the Art Newspaper reported in January. Putting emerging artists’ work straight onto the collectors’ market, rather than selling it through local galleries, “undermines the foundation of the market,” the organization argued.

Korean artist Hun Kyu Kim, who is based in London but is showing several works at Frieze Seoul, said the arrival of a major international art fair offers “pros and cons” for the local scene. Ultimately, though, “it’s a really good sign,” the painter said.

“I’ve seen so many Korean artists who have had no chance to show their work internationally,” he added. “So, I think it’s (going) to be a good chance to (not only) see international art but also for local artists as well.”

To that end, Frieze opted to collaborate — not compete — with the Galleries Association of Korea’s longstanding local fair, Kiaf Art Seoul, which has been running in the capital since 2002. The two events are being held simultaneously at the same venue.

“It was very important for Frieze to reach out to (the galleries association) and get their support,” said Frieze director Lee, who was previously executive director of Gallery Hyundai, a stalwart of the Seoul art world.

“The best art fairs are the ones that really engage with the (local) institutions … and are activating, exposing and supporting the local art scene.”