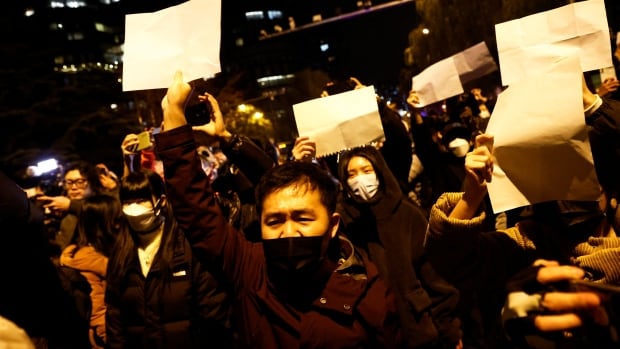 Wanting to send a message to China’s government, protesters in cities across the country held up blank sheets of paper.

There was no text or symbols, no pictures on the pages — just empty white rectangles, meant as a metaphor for China’s censorship of dissent.

For Teng Biao, the meaning was clear.

“People can read behind the blank paper. The anger, the dissatisfaction, and the desire for democracy and freedom. Everything is already there,” Teng, a Chinese human rights activist, lawyer and academic living in exile in the US, told CBC News .

The protests, which began Friday, were rooted in a push to lift the country’s COVID-19 lockdown measures. Nearly three years into the pandemic, China remains wedded to its strict “zero-COVID” policy, with entire buildings and even neighborhoods often locked down in the event of infection, and millions of people being tested for coronavirus daily.

But some have blamed those restrictions for firefighters’ inability to rescue 10 people from a deadly fire in the northwest city of Urumqi the previous night, saying some of the building’s doors and exits had been sealed off as part of lockdown measures. That set off this latest wave of anger.

The movement, however, quickly grew into a call for greater political rights: freedom of speech, democratic reforms and even the ouster of Chinese President Xi Jinping, in an unprecedented challenge to his leadership.

Some observers have dubbed the protesters — and the sheets of white paper they hold up — the “white paper revolution” or “A4 revolution,” in reference to the letterhead’s size.

Though their revolt is highly unlikely to upend China’s political establishment, experts say the protesters are nonetheless sending an extraordinary signal to the ruling Communist Party — without saying a word.

“In effect, they’re saying something without saying anything,” said Dave Clark, a professor of political science at Binghamton University in New York, who runs a project tracking global protests🇧🇷

White sheets of paper become a protest symbol in China

White sheets of paper have become symbols of protest in China as thousands call for an end to restrictive ‘zero COVID’ policies and for greater freedoms in a place where censorship is pervasive and protesting can be deadly.

Blank signs have been a feature of protests, albeit rarely, for more than 50 years, including at a cheeky sit-in by Toronto high school students in May 1969.

“They carried blank placards and said their protest had no purpose and they expected to achieve nothing,” The Associated Press reported, adding that the group refused to budge until their demands were met.

Today, that empty symbol of defiance has become a code for protest movements in several countries.

Plain white placards appeared again earlier this year at anti-war protests in Russia, where police detained people carrying signs and posters — regardless of whether they had anything written on them🇧🇷

Even Britons have run afoul of authorities for protesting with a single white sheet of paper. In September, as police arrested people protesting King Charles’s accession, a barrister who went to Parliament Square and held up a blank piece of paper was confronted by police, who demanded he give his name and details of him.

Just went to Parliament Square & held up a blank piece of paper. Officer came & asked for my details. He confirmed that if I wrote “Not My King” on it, he would arrest me under the Public Order Act because someone might be offended.

In China, protesters believed the blank pages could provide some cover if they were detained by police, Teng said. After all, what could possibly be political about a piece of paper with nothing on it?

“If you have a banner or a paper with words like, ‘Down With The Communist Party’ or ‘Down With Xi Jinping,’ something like that, it’s super dangerous,” Teng said.

“Holding a blank sheet of paper is a way to reduce the political and legal risk: when being arrested or interrogated, people [can] argue that there’s nothing there.”

China’s protests were more subdued on Tuesday, with extra police deployed on the streets of Beijing and Shanghai and university students sent home in order to quell activism on their campus.

Meanwhile, a major paper manufacturer in China had to dispel rumors that it was banning sales of A4 paper to stop the protesters from using it to share their message.

Censors were also frantically scrubbing mentions of the protests from social media platforms, although the appearance of white paper at rallies in different cities suggested the act of defiance had spread faster than China’s authorities could contain.

“That sort of solidarity is the kind of thing that’s likely to put the government on alert,” Clark said. “Perhaps even more than the protests themselves are.”