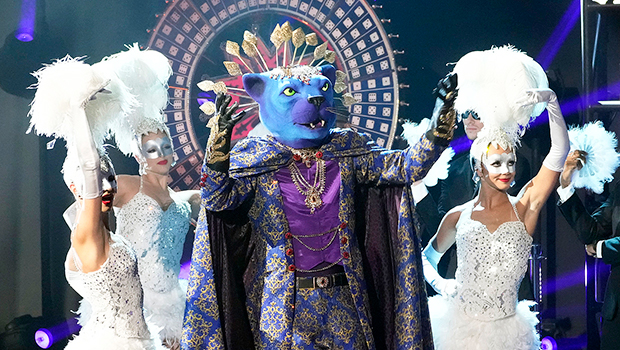 Montell Jordan was revealed as the Panther during Vegas Night on The Masked Singeralongside Chris Kirkpatrick as the Hummingbird and Jeff Dunham the Py-rat. The R&B singer has been a longtime fan of the show and wanted to be able to show “different sides” to himself.

“I thought this was an opportunity for me to allow people to see and hear different sides of me, and not through the lens of who they think I’m supposed to be as an artist,” Montell told HollywoodLife EXCLUSIVELY. “I wanted people to be able to hear and feel something different and be like oh, that came out of that guy, and be pleasantly surprised that they can now take me out of the box that I’ve been put in.”

Montell sang a terrific rendition of “Feeling Good” during the September 28 episode. He explained why he chose that particular song. “It’s interesting because it was Michael Buble who remade the song and when they presented it to me, I was like, ‘Oh, that’s Michael Buble. That’s great, but this is a Nina Simone song.’ So just the idea of ​​bringing the showmanship of a Buble but to bring the passion and the original feeling of the darkness but the hope behind the song in the way that Nina presented it, I was trying to kind of merge those two things together to bring the pain and the showmanship through Panther’s performance. I knew it right when I heard it. That was a song that I would want to sing. It’s a song I would want to record someday in my life on a jazz project, so it just all came together,” he said.

The “This Is How We Do It” singer transformed into the “very royal” Panther on The Masked Singer. “Under the lights with the energy, I was literally sweating profusely,” Montell admitted. “I think even after I’m unmasked I’m like, I cannot stop sweating because of the heat. I felt like combustion was taking place underneath that. So it’s difficult enough to sing a great song just outwardly without a mask on, so hats off to all the performers and the artists who are singing with the masks on.”

His clue package addressed the singer’s 2012 death hoax. “I only talked about it because it was an eye-opening moment for me,” Montell said. “That was a heart-opening moment for me that if that was it for me, if it were not hoax, what would happen in the world was there’d be a series of people posting saying, the guy that did ‘This Is How We Do It’ died. That, for me, was not enough for me. To me, that was not a life well lived for me being remembered in that way. I’m a husband. I’m a father. I’m a grandfather or big papa. I’m a leader. I’m a speaker. All of these things led me to do the things that I’m doing now. I did not want people to think he’s the guy that sings this song. I’m so much more than that.”

In early 2023, Montell will return to TV in the new FOX series Special Forces: The Ultimate Test. Montell revealed why he wanted to challenge himself once again in a show that tests his physical, mental, and emotional resilience.

“I think it was the most insane thing I’ve probably ever done in my life, and probably one of the most rewarding things as well,” he revealed. “My wife and are trying to help married couples. We do marriage ministry together. We’re trying to help save a million marriages. That’s something that’s important to us. We’ve also launched a virtual church over the past couple of weeks. At the top of 2022, we felt like in our hearts, in our faith walk, that what God was saying to us was in order to launch a church, you can’t have fear. There’s no room for fear, so when this opportunity to do Special Forces came up, it was like okay, well, these are the things I am most afraid of. I don’t swim. I don’t like heights. There are things that I’m terrified of, but if there’s no room for fear in leading people who are going through the most terrifying things in their life when you’re faced with cancer or you’re faced with divorce or you’re faced with some type of sickness, some type of brokenness, you’ve got to face that.”

He continued, “In order for me to lead people well through their greatest fears, I took on Special Forces to face my greatest fears, and they throw them at me on day one. What we experienced there with that team, I’ve got some lifelong friends now. We talk and we’re still connected to this day, so I got a new family by being in the desert under the most ridiculous circumstances. I have a new respect and appreciation for our armed forces as well.” The Masked Singer season 8 airs Wednesdays on FOX.