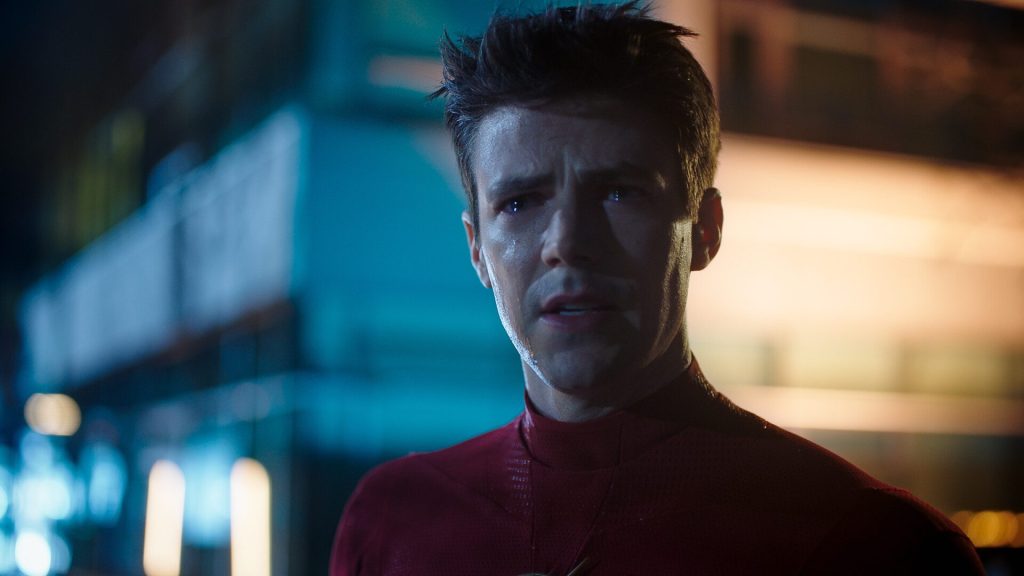 In tonight’s Season 8 finale of The Flashtitled “Negative, Part Two,” the superhero formerly known as Barry Allen (Grant Gustin) once again finds himself at war with his longtime foe Reverse-Flash (Tom Cavanagh), also confronting the prospect that he may have been tricked into killing Iris (Candice Patton).

While Reverse-Flash has been resurrected by the negative forces, who are looking to turn the tables as far as the balance of the universe, Iris is nowhere to be found, after Deon (Christian Magby) put her in the way of Flash’s lightning.

After Reverse-Flash unravels certain mysteries around the Negative Speed ​​Force, which has chosen him as its avatar, he is placed out on the streets of Central City with the combined powers of the negative forces to sew chaos. At the same time, we learn that Iris is very much alive, with her consciousness ensconced in a time stone. There, she encounters Damien Darhk (Neal McDonough), who explains that the negative forces have been using her time sickness as an incubator to birth their latest avatar.

The Flash ultimately confronts Reverse-Flash alongside Meena (Kausar Mohammed) and others and dispatches him after absorbing the combined powers of the positive forces. The universe resets itself and Iris is cured of her time sickness, with Thawne nowhere to be found in the timeline. It seems that, at last, the Flash’s battle with his alter ego is really, truly over.

In the aftermath of this battle, both Meena and Cecile (Danielle Nicolet) lose their powers, though the latter gains a new one—that of telekinesis. After Tinya (Mika Abdalla) is reunited with her birth mother dela Renee (Meghan Gardiner), Iris and Barry discuss the fact that the negative speed force will have to find a new avatar, because the universe is all about balance. And that when they do, Team Flash will be ready for them.

Possibly stepping in as the avatar in question is an unseen character voiced by Danielle Panabaker, who surprises Mark Blaine (Jon Cor) when she walks out of his Consciousness Resurrection Chamber. “Who the hell are you?” he asks, to which she responds, “A friend, I think.”

Developed by Greg Berlanti, Andrew Kreisberg and Geoff Johns, The Flash was renewed for a ninth season in March. Marcus Stokes directed tonight’s finale, from a script by showrunner Eric Wallace.

Wallace spoke with Deadline ahead of the episode’s airing to break down the events of a finale he’s been driving at for years—which he once thought might end the series as a whole. He also touches on the fate of Reverse-Flash, who we heard emerging from Blaine’s box, navigating the exit of series regular Jesse L. Martin, “fan favorite” characters returning in Season 9, and the prospect that the upcoming season could be the show’s last.

DEADLINE: When did the idea for The Flash‘s Season 8 finale crystallize?

ERIC WALLACE: This is a finale that I literally have been driving for several years. The original idea for the final battle between negative and positive forces [came] two years ago, when we decided to birth the positive forces way back at the end of Season 6 and the top of Season 7. So, it’s been building this whole time, and we’ve been dropping little clues. Like we did, for example, at the end of Season 7, when Speed ​​Force Nora said, “Hey! I just discovered negative forces. I didn’t even know they existed.” That was us giving you a heads up that this was coming.

DEADLINE: Were there ever any alternative facets to the finale? Ideas you explored that didn’t wind up being reflected in the final cut?

WALLACE: No, it pretty much came out exactly as planned. The only thing that’s different is, we weren’t sure how many episodes we might have in Season 8, and we weren’t sure if this was going to be the last season or not, when we were originally driving towards it. When you watch this episode, there’s things about it that feel really final—you know, this Final battle between Barry and Thawne. That’s because it was originally written to be potentially a series finale. So, I think that hopefully gives some weight and drama to the fact that, “Okay, this really is the final battle between Flash and Negative Reverse-Flash.”

DEADLINE: That being said, we really are done with Reverse-Flash?

WALLACE: At this point, yes. The Negative Reverse-Flash, just like Frost, is dead…Now, having said that, we’ve got another season, and I wasn’t expecting that. I’m very happy about it. [But] just because the Negative Reverse-Flash is dead doesn’t mean that Tom Cavanagh might not pop up on the show in some capacity in Season 9. I think I can say that without giving any spoilers away. [Laughs]

DEADLINE: A few cliffhangers are presented in the final moments of Season 8. After Barry and Iris hint that the negative forces will need to choose a new avatar going forward, Mark Blaine is met with an unseen character emerging from his Consciousness Resurrection Chamber. What can you tell us about what you’ve set up here?

WALLACE: There’s two separate things there. I’ll answer the first thing first, which was the Negative Speed ​​Force avatar…Yeah, it’s funny. It says in the episode, as Deon has been pointing out all the way back in Episode 815, there has to be balance in the universe, which means there must be a Negative Speed ​​Force avatar. And since we just saw one die, I’m pretty sure that the negative forces are going to have to come up with a new one. The question is, who will that be? Stay tuned. I’m pretty sure you’ll get the answer to that sooner rather than later.

DEADLINE: We also learn in the finale that Cecile now has a new superpower. Tell us about that…

WALLACE: Cecile got telekinesis. We saw that cup fly into her hand. Since we gave her all these superpowers and then took them away because she helped the side of good, we wanted to make sure she got a little reward for that, and so we gave her a brand new power. So, in addition to all the wonderful mental powers that she has always had in Seasons 6, 7 and 8, in Season 9, she will also now start to grow her telekinetic abilities. It’s very exciting.

DEADLINE: What can you tell us, as far as who all will appear in Season 9? Any big, new villains?

WALLACE: I’m now going into the third season of The Flash where I don’t know whether or not it’s the last, right? So, I did this at the end of Season 7, and then I got an 8. I did it at the end of Season 8, and then I got a 9. Now, I’m doing it in Season 9 and I hope I get 10. But just in case, get ready for some very familiar, old faces, villains from the past, throughout the entire eight years of the series. You’re going to see some old faces coming back, and we’re going to have some fun—including some very, very big fan favorites.

DEADLINE: While Jesse L. Martin’s exit as a regular series was announced back in April, we’ve heard that he’ll be back in Season 9. But how exactly will he figure into the story? Will he be coming on for a few episodes early in the season to wrap up loose ends?

WALLACE: Well, again, I don’t know if this is my last season or not. So, we do have a specific story for Jesse that relates to [Joe], Cecile and their family that’ll happen right out of the gate in the season, and then we’ll kind of just play it by ear. But we don’t want Jesse to disappear from the show, just because you’re only in five episodes. There’s a way to have him still be a part of the show and keep the character alive, just in case he wants to come back, quite frankly.

DEADLINE: When do you think you’ll know whether The Flash‘s ninth season will be its last?

WALLACE: It’s the question I get asked every five minutes. I wish I could answer it; I wish I knew. I hope I will know by the time we start shooting in the fall. I think that’s a fair statement. [Laughs] So, stay tuned.

DEADLINE: Where are you at exactly with the new season?

WALLACE: I literally just finished the Season 8 finale today to get it on the air on Wednesday. The Season 8 season finale is the biggest one we’ve ever attempted. There’s so many special effects. It’s so incredible. I had a blast writing it, and we thought this was going to be a series finale, so we had this huge, incredible battle between Grant Gustin and Tom Cavanagh. So, it was incredibly difficult to fully realize it and get it onto the screen, but I’m happy to say that we did. I’m so excited for people to see it this Wednesday. After that, I’m literally taking a few weeks off and I’m not going to think about Season 9 at all. Yes, I do know what the end of Season 9 is already. We have multiple big bads next year. We’re going to continue our graphic novel format. I don’t know how many episodes I’ve got, quite frankly, so if I get enough episodes, we’ll have three graphic novels just like this past year. If I get less, then I’ll act accordingly. But there’ll be at least two graphic novels with at least two separate big bads, one of whom is a blast from the past.

DEADLINE: Do you know yet whether Season 9 will feature any kind of crossover event?

WALLACE: I don’t have a sense yet. That’s usually driven by The CW, the network. There are no plans for anything like that at this time, but I might get a call tomorrow.

DEADLINE: The Flash will surpass arrow next season as the longest-running Arrowverse series on The CW. What does it mean to you to be hitting that milestone?

WALLACE: We’ll be at one-hundred eighty four, [one-hundred] eight five episodes, something like that. Something insane. Given the climate that we’re in with short seasons and short orders, it’s quite frankly a miracle and I’m so proud to be a part of something as special as this. It’s something that we, the writers and producers and directors, and even the studio and the network, something that we take very seriously. There may not be many more shows that get a chance to run more than 180 episodes, so we’re going to try this Season 9 to make each one just a home run if possible.

DEADLINE: Are any potential Flash spinoffs being looked at, at this point?

WALLACE: No, because you really don’t start looking at spinoffs until you think you’re not coming back, and I’m not thinking that way. [Laughs] Now, having said that, obviously…we’ve introduced a lot of characters over the last couple of seasons…I would say to the audience, if you have some characters that we have introduced in the last few years that you want to see in a spinoff, you should write to The CW. But I’m going to just stay focused on The Flash right now before I start focusing on anything else.