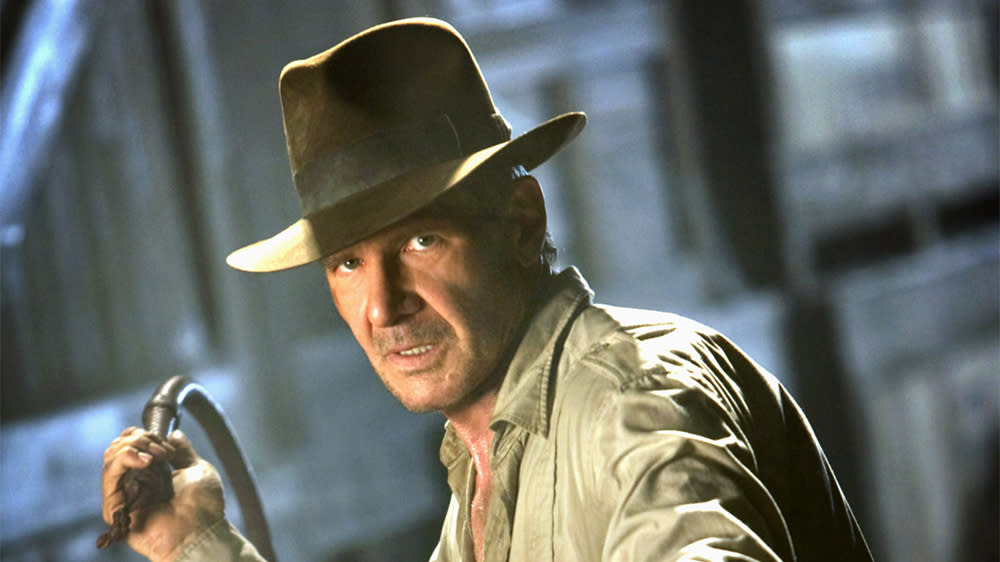 The king of adventure is back once again.

“Indiana Jones 5” showed its first trailer on Saturday during the D23 Expo. Although it was not released online, Harrison Ford appeared onstage to speak about the footage, joined by director James Mangold and co-star Phoebe Waller-Bridge.

“Thank you for making these films such an incredible experience for all of us,” he said, looking quite emotional. “I’m very proud to say to say that this one is fantastic. [Points at Waller-Bridge] And this is one of the reasons.”

“’Indiana Jones’ movies are about fantasy and mystery, but they’re also about heart,” he continued. “We have a really great story to tell, as well as a movie that will kick your ass.”

Ford also alluded to this being his last time in the role, saying, “This is it. I will not fall down for you again. But thank you so much.”

Waller-Bridge also shared Ford’s excitement, saying, “I had the time of my life making this movie. I feel so incredibly lucky and keeping up with this guy [points at Ford] is EXHAUSTING.”

While the plot has been largely kept under wraps until now, the newest trailer gives fans the first real look at Indy back in action. The last time the classic character was seen on screen was 14 years ago with “Indiana Jones and the Kingdom of the Crystal Skull.” Ford was 64 when “Crystal Skull” released, and he’s now 80, so it seems that no age barrier cannot stop the world’s greatest archaeologist.

Alongside Ford and Waller-Bridge are newcomers to the series Mads Mikkelsen, Toby Jones, Boyd Holbrook, Thomas Kretschmann and Antonio Banderas.

The film marks the first time that acclaimed director Steven Spielberg is not helming an installment of the series. While Spielberg stayed on as a hands-on producer, “Indiana Jones 5” is directed by Mangold (“Logan,” “Ford v. Ferrari”). According to Holbrook, fans have no reason to worry about the directory change.

“The guy just can’t make a bad movie,” Holbrook previously told Variety. “He is so precise in what he does.”

John Williams is also returning to compose the score for the film. In early September, Williams gave audiences at the Hollywood Bowl a taste of the soundtrack, showcasing a new theme titled “Helena’s Theme.” The track’s title is in reference to Waller-Bridge’s character in the film, whom he described as “an adventuress, and also a femme fatale… she’s many, many things… She has a kind of lyrical music, like an old movie star. ”

“The Mandalorian” is gearing up for a new adventure. Disney+ has released the first trailer for Season 3 of the popular “Star Wars” series, and announced the series will premiere sometime in 2023.

At D23, actor Katee Sackhoff hinted that the upcoming season is “crazy” before Lucasfilm revealed a teaser trailer.

Season 3 follows up on the events of “The Book of Boba Fett,” the 2021 miniseries which featured the series’ lead Din Djarin (Pedro Pascal) — better known as the Mandalorian or “Mando” — in a guest appearance. The end of the miniseries saw Grogu, Mando’s young charge, choose to return to him after previously departing his side from him to train with the Jedi Master Luke Skywalker (Mark Hamill). The two then left Tatooine, with Mando going on a quest to visit “the living waters” under the planet Mandore in order to regain his honor from him and become a Mandalorian again. The hero will face plenty of obstacles in his quest, chief of which being other members from the people, with the trailer teasing a battle between Djarin and other stoic, armored warriors.

In addition to Pascal, Carl Weathers, Giancarlo Esposito and Katee Sackhoff have been confirmed to reprise their previous “Mandalorian” roles for Season 3. Weathers plays bounty hunter guild leader Greef Karga, while Esposito portrays the primary villain of the series, Moff Gideon, who is attempting to capture Grogu from Mando. Katee Sackhoff returns from Season 2 as Bo-Katan Kryze, a female Mandalorian seeking to retrieve the Darksaber from Mando.

In addition, Christopher Lloyd is confirmed to appear this season. Notable prior cast members of the show include Amy Sedaris, Omid Abtahi, Bill Burr, Timothy Olyphant, Titus Welliver and “Book of Boba Fett” stars Temuera Morrison and Ming-Na Wen. Season 2 of “The Mandalorian” also featured the first appearance of Rosario Dawson as fan-favorite character Ahsoka Tano, who is getting her own self-titled spinoff series set to release next year.

“The Mandalorian” was created by Favreau, who will write most of the season. He and Filoni executive produce with Kathleen Kennedy, Colin Wilson and Rick Famuyiwa, with Lucasfilm producing the series. Weathers is confirmed to direct an episode of the third season. Prior directors have included Bryce Dallas Howard, Deborah Chow, Taika Waititi, Peyton Reed and Robert Rodriguez. Filming for the season started in October last year and reportedly wrapped in March.