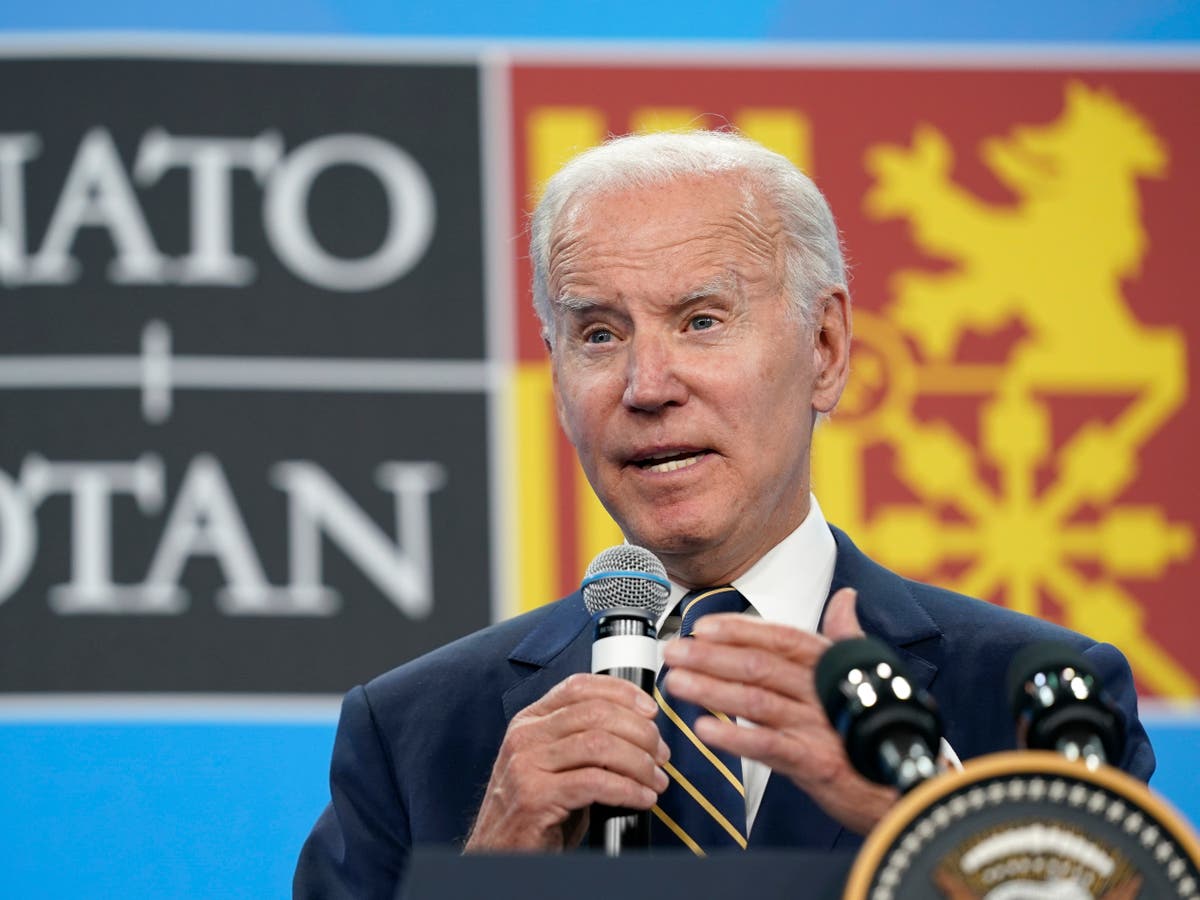 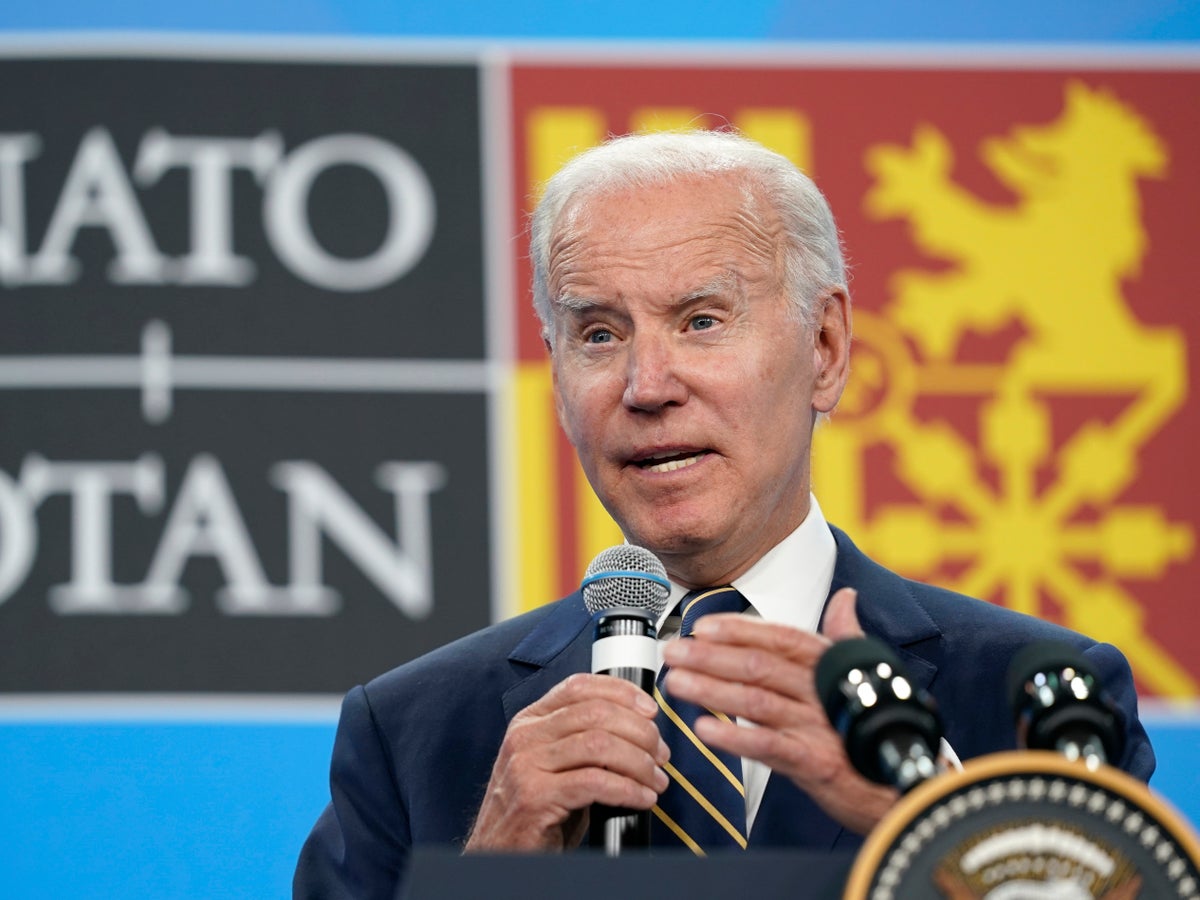 Joe Biden said during a press conference at the NATO summit in Madrid that drivers can expect to pay higher gas prices for “as long as it takes” for Ukraine to win the war against Russia.

The president was asked by Jim Tankersly of The New York Times, “how long is it fair to expect American drivers, and drivers around the world, to pay that premium for this war?”

“As long as it takes,” Mr Biden said. “Russia cannot in fact defeat Ukraine and move beyond Ukraine.”

The president blamed Russia for the spiking gas prices as well as the global food shortage.

“I’ve released a million barrels of oil per day from our oil reserve, and in addition to getting other nations to move forward, a total of 240 million barrels of oil to release from the Strategic Petroleum Reserve,” Mr Biden said, adding that “I have asked Congress – would they in fact go and temporarily end the tax on gasoline at the pump, and, thirdly to ask the states to do the same thing”.

“If we do these things … if Congress agreed and the states agreed, we could bring down the price of oil about a dollar a gallon at the pump,” he said.

“Look at the impact that the war on Ukraine has had on Russia,” the president said. “They’ve had to renege on their national debt for the first time since the beginning, almost well over 100 years. They’ve lost 15 years of the gains they’ve made in terms of their economy.”

“They’re in a situation where they’re having trouble because of my imposition of dealing with what can be exported to Russia, in terms of technology,” he added. “They’re going to have trouble maintaining oil production because they don’t have the technology to do it. … And they are also in a similar situation in terms of their weapons systems and some of their military systems.”

He said NATO would “stick with Ukraine”.

“Ukraine has already dealt a severe blow to Russia – Russia in fact has already lost its international standing. Russia is in a position where the whole world is looking and saying, ‘wait a minute, all this effort to try to take the whole country – you tried to take Kyiv, you lost, you tried to take the Donbas and all of it, you haven’t done that yet,’” Mr Biden said.

“The generic point is we’re supplying them with the capacity and the overwhelming courage they have demonstrated that in fact they can continue to resist the Russian aggression. And so I don’t know … how it is going to end, but it will not end with a Russian defeat of Ukraine in Ukraine,” Mr Biden added.

“I awned [Russian President Vladimir] Putin that if he invaded Ukraine, NATO would not only get stronger but would get more united,” Mr Biden told the press. “And we would see democracies in the world stand up and oppose his aggression and defend the rules-based order. And that’s exactly what we’re seeing today.”

The US is “rallying the world to stand with Ukraine”, Mr Biden added.

“We’re moving to a place that reflects the realities of the second quarter of the 21st century and we’re on the verge of making significant progress,” he said.

“At every step of this trip, we set down a marker of unity, determination and deep capabilities of the democratic nations of the world to do what needs to be done,” Mr Biden said at the end of the NATO summit in Madrid.

“Putin thought we could break the Transatlantic Alliance,” he added. “He tried to weaken us, expected our resolve the fracture, but he’s getting exactly what he did not want.”

“He wanted the Finlandization of NATO. He got the NATO-ization of Finland,” he said, referring to Finland’s Cold War was a strategy towards the Soviet Union.

“We’re more united than ever. And with the addition of Finland and Sweden, we’ll be stronger than ever. They have serious militaries, both of them. We’re going to increase the NATO border by 800 miles along the Finnish-Russian border. Sweden is all in,” Mr Biden said.

The president said the military alliance is working to address several crises, including the price of gas and oil, and the food insecurity hitting large parts of the world.

“We tasked our teams to work on the details of the price cap on Russian oil, to drive down Putin’s revenues without hurting Americans and others at the gas pump,” he said. “We’ll seek to use the funds from the tariffs on Russian goods to help rebuild Ukraine. We’ve committed more than $4.5bn, more than half of that from the United States, to address food insecurity, and the immediate crisis caused by the Russian war.”