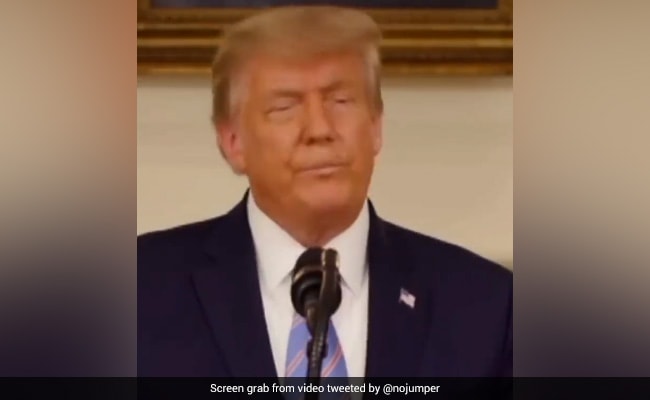 At one point, the former president refuses to read a passage that says the election is over.

Former US president Donald Trump refused to say he lost the 2020 US Presidential election, showed a behind-the-scenes video of him trying to read a statement to the nation prepared by his staff.

The outtakes, presented by the select committee probing the 2021 Capitol Hill Riots, also show Trump refusing to go out of his way to condemn the rioters.

“This election is now over. Congress has certified the results,” Trump was to tell Americans.

But he couldn’t do it.

In the video, recorded around 24 hours after rioters swarmed the US Capitol, of a speech which was meant to condemn the violence, Trump is seen refusing to read what was written by his staff and repeatedly editing the text.

At another point, the former president refuses to read a passage that says the election is over.

“But this election is now over, Congress has certified the results,” read the passage.

“My only goal was to ensure the integrity of the vote,” he says, visibly struggling.

Trump has slammed the panel investigating the Capitol Hill Riots by calling it a “kangaroo court”. He also went as far as terming the panel’s vice chair Liz Cheney as a “sanctimonious loser”.

“I had an election rigged and stolen from me, and our country. The USA is going to hell. Am I supposed to be happy?” Trump wrote on his social media platform Truth Social, as he accused the panel of being “corrupt and highly partisan.”

“Because they know the answer, and don’t like it. A kangaroo court!” Trump added.