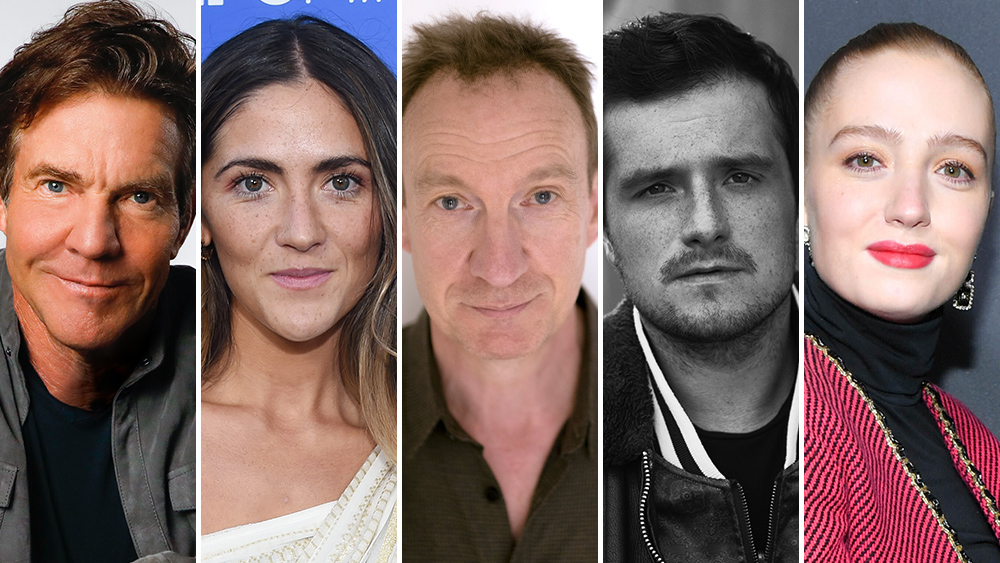 EXCLUSIVE: Dennis Quaid (midway), Isabelle Fuhrman (The Novice), David Thewlis (fargo), Josh Hutcherson (The Hunger Games franchise) and Kiera Allen (The Good Doctor) will star in the sci-fi mystery littlemouth, which has entered production in the Cayman Islands. Jonathan Sobol (The Father) wrote the script and is directing for Productivity Media and Darius Films.

The film set in the present day follows a brilliant computer scientist (Fuhrman) who is recruited by a charismatic tech billionaire (Quaid) to work on a secret project that might just change humanity’s place in the universe forever, though it comes at great risk. Nicholas Tabarrok (defender, Stockholm) is producing alongside Productivity Media’s William G. Santor (Four Good Days) and Doug Murray (unplugging), with Mimi Steinbauer’s Radiant Films handling international distribution rights.

“This is a story I am passionate about telling and I’m thrilled and humbled with the cast that has come together to bring it to life,” said Sobol. “With Isabelle Fuhrman in the lead working with an icon like Dennis Quaid and the incomparable David Thewlis (one of my all-time favorite actors), to younger stars like Josh and Keira – I simply couldn’t have asked for a better group of artists to work with.”

“When I read Jonathan’s original screenplay, I was so taken by the creative spin that he had taken on the sci-fi genre,” added Santor. “His script makes the reader think about decisions made by scientists and how they affect the world around us and beyond. He is the only filmmaker who could direct his script into a film that genre fans will love.”

Quaid is an Emmy and two-time Golden Globe nominee whose recent credits include the films American Underdog, midway and A Dog’s Journeyas well as such series as Netflix’s Merry Happy Whatever and Prime Video’s goliath. He’ll also soon feature in Sam McNamara’s dramas On a Wing and a Prayer and ReaganDon Hall’s Disney animated pic Strange World and Jeff Celentano’s baseball drama The Hillamong others.

Fuhrman recently landed an Independent Spirit Award nomination for Best Female Lead, for her turn in Lauren Hadaway’s critically acclaimed IFC drama, The Novice. She found her breakout role in Jaume Collet-Serra’s psychological horror film orphanand will soon appear alongside Julia Stiles in its sequel Orphan: First Kill for Paramount Players. The actress has previously appeared in Showtime’s Masters of Sex, as well as such films as The Hunger Games and After Earthand will also soon be seen in Jordan Gertner’s action-adventure film Sheroes for Paramount, as well as the thriller Unit 234.

Thewlis landed an Emmy nom a few years back for his stellar turn as VM Varga in FX’s Fargo. He’s recently appeared in films including Zack Snyder’s Justice League and I’m Thinking of Ending Thingsas well as such series as landscapers, Barkskins and Netflix’s Big Mouth and Human Resources. Other upcoming projects include the animated film The Amazing MauriceNetflix’s series The Sandman, Enola Holmes 2 and Avatar 3.

Hutcherson is a Gotham Award nominee best known for his turn as Peeta Mellark in Lionsgate’s Hunger Games franchise. He’s also been seen in such films as The Disaster Artist, Journey to the Center of the Earth and Journey 2: The Mysterious Islandand The Kids Are All Rightand recently starred in Hulu’s series future man. He’ll next be seen in the sci-fi thriller 57 seconds with Morgan Freeman.

Allen is a relative newcomer who has thus far been seen on ABC’s The Good Doctor and in the Hulu thriller run from Anesh Chaganty.

Sobol has previously written and directed features including A Beginner’s Guide to Endings and The Art of the Stealalso helming the 2018 crime drama The Father with Tim Roth and Nick Nolte.

Productivity Media has been behind such notable Indies as Four Good Days, Black Bear, Percy vs Goliath, born to be blue and Stockholm. Up next for the company is Robert Budreau’s Delia’s Gone starring Marisa Tomei, Travis Fimmel, Paul Walter Hauser and Stephan James.