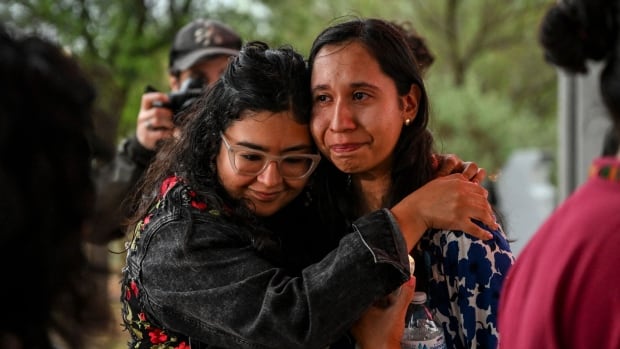 The number of dead rose to 53 on Wednesday in what is believed to be the nation’s deadliest smuggling episode near the US-Mexico border.

The bodies were discovered Monday afternoon on the outskirts of San Antonio in an abandoned tractor-trailer. Authorities think the truck had mechanical problems when it was left next to a railroad track surrounded by auto scrapyards that brush up against a busy freeway, said Judge Nelson Wolff of Bexar County, the district in Texas where the truck was left.

According to the Bexar County Medical Examiner’s Office, 40 of the victims were male and 13 were female.

Officials had potential identifications on 37 of the victims as of Wednesday morning, pending verification with authorities in other countries.

Few identities of the victims have been made public so far, with authorities facing challenges in tracing people who cross borders clandestinely.

Victims have been found with no identification documents at all and in one case a stolen ID. Remote villages lack phone service to reach family members and determine the whereabouts of missing migrants. Fingerprint data has to be shared and matched by different governments.

More than a dozen people were taken to hospitals, including four children. Three people have been arrested.

The truck, which was registered in Alamo, Texas, but had fake plates and logos, was carrying 67 migrants, Francisco Garduno, chief of Mexico’s National Immigration Institute, said Wednesday.

The driver was apprehended after trying to pretend he was one of the migrants, Garduno said. Two other Mexican men have also been detained, he said.

Deceased come from at least 4 countries

Among the dead were 27 people from Mexico, 14 from Honduras, seven from Guatemala and two from El Salvador, he said. The country of origin for one of the victims is not known, Garduno said.

With little information about the victims, desperate families of migrants from Mexico and Central America frantically sought the word of their loved ones.

Several survivors were in critical condition with injuries such as brain damage and internal bleeding, according to Ruben Minutti, the Mexico consul general in San Antonio.

Guatemala’s foreign ministry said late Tuesday that it had confirmed two hospitalized Guatemalans and was working to identify three possible Guatemalans among the dead. Honduras’s foreign relations ministry said it was trying to confirm the identities of four of the dead who were carrying Honduran papers.

Eva Ferrufino, a spokesperson for Honduras’s Foreign Ministry, said her agency was working with the Honduras consulate in south Texas to match names and fingerprints and complete identifications.

The process is painstaking because among the pitfalls are fake or stolen documents.

Migrants typically pay $8,000 to $10,000 to be taken across the smaller border and loaded into a tractor-trailer and driven to San Antonio, where they transfer to vehicles for their final destinations across the United States, said Craig Larrabee, acting special agent in charge of Homeland Security Investigations in San Antonio.

The tragedy occurred at a time when huge numbers of migrants have been coming to the US, many of them taking perilous risks to cross swift rivers and canals and scorching desert landscapes. Migrants were stopped nearly 240,000 times in May, up by one-third from a year ago.

Migrants have been expelled more than two million times overall under a health order that the Trump administration invoked in March 2020 as the coronavirus pandemic began to rage. The Title 42 authority denies migrants a chance to seek asylum and be funnelled into the refugee system but encourages repeat attempts because there are no legal consequences for getting caught.

An attempt by the Biden administration to end Title 42 in May was blocked by the courts after legal action was launched by 24 states opposed to the plan.

Title 42 is one of two major surviving Trump-era policies to deter asylum at the border, along with the Migrant Protection Protocols (MPP), better known as “Remain in Mexico.” The US Supreme Court heard arguments in the spring on the program the Biden administration is trying to end, and is expected to render an opinion on the case any day now.