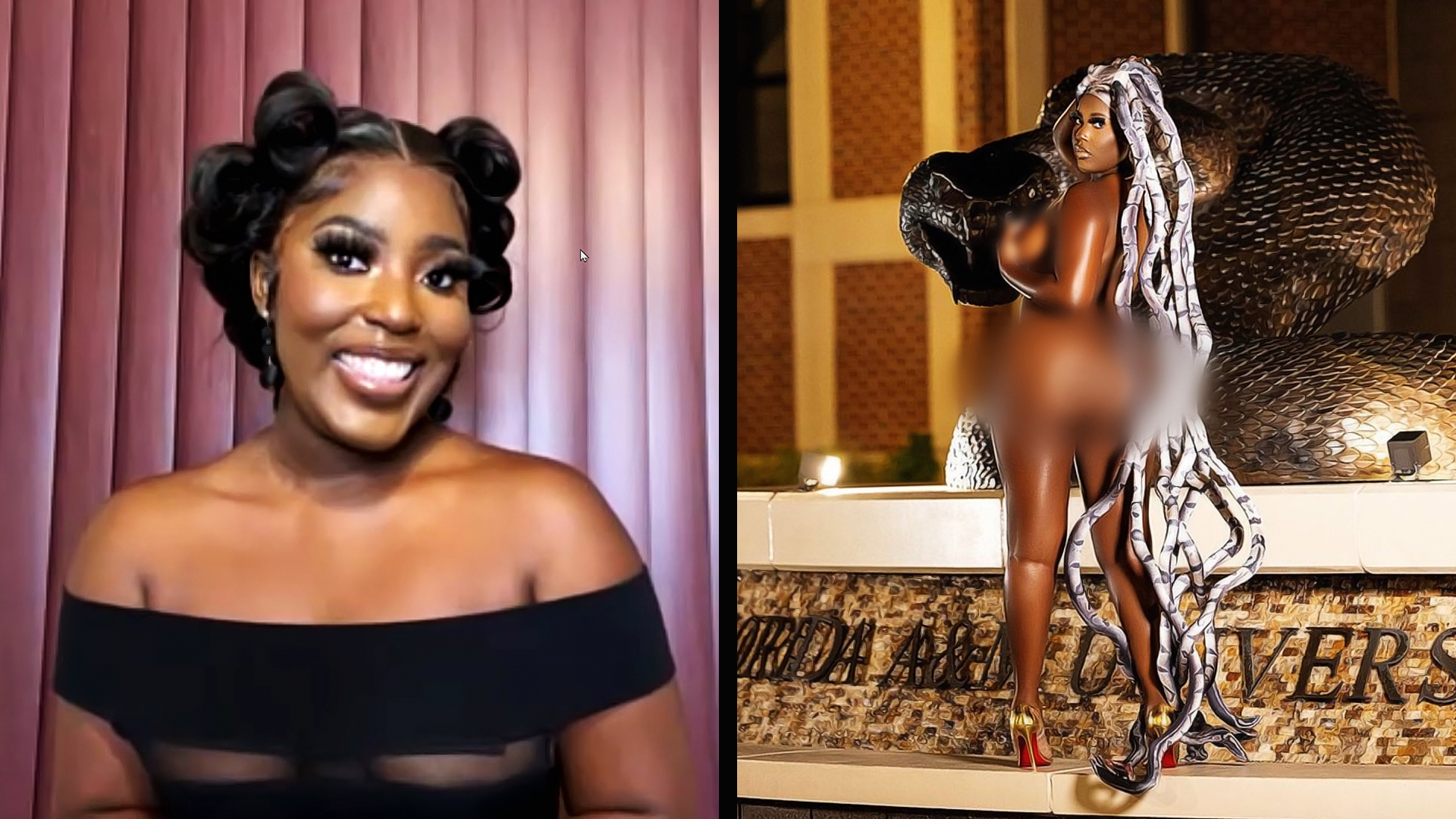 Florida A&M University graduate Terica Williams rattled a few folks when she posted pics from a racy photoshoot, she had on the campus of the beloved HBCU.

In the photos Williams — wearing what seems to be nothing but snake-themed hair and pair of red bottoms — can be seen posing in front of a statue of the Rattler, FAMU’s mascot.

The controversial images have gone viral and have been met with outrage leading to a campus-wide investigation, and calls from some alumni to hold her diploma.

In a TSR Investigates exclusive Williams is speaking out.

Did she take things too far? Does this situation call for extreme disciplinary action from the university? The Shade Room investigates…

Williams had graduated from the Historically Black University in July of this year, and had done so with a near-stellar 3.8 GPA. She received a master’s degree in counseling and education, and took the photos to celebrate the occasion, she told TSR Investigates’ Justin Carter.

The pictures were far from the typical cap-and-gown type affair usually taken to commemorate a graduation, with one in particular drawing widespread backlash on social media after she posted it to her Instagram account on July 29.

“I really wanted to showcase Black excellence and body positivity. When I posted it, I didn’t expect (the backlash) to this extent,” Williams told TSR Investigates’ Justin Carter.

The 24-year-old could be seen, in the nude sans a pair of heels, adorned with faux snakes coming from her hair – a nod to the university’s snake mascot, of which the picture was taken in front of.

“I went with a Medusa theme, to kind of symbolize a snake, like, shedding,” she said of the idea.

When asked if she was in fact completely naked in the photo or not, Williams declined to answer while citing the fact that there is an open criminal investigation into the situation.

Williams did reveal that she has been known to dress provocatively “her whole life,” and that “people know how I dress and that I’m very comfortable in my own skin.”

“People know… that I’m very comfortable in my own skin. I like taking risks,” she revealed.

Williams defended the photo, however, and joked that the university should replace the mascot with a statue of her, saying “I feel I’m that girl, and I can encourage other people to be that girl.”

She added that she never meant to offend anyone, and that her intentions were pure.

But some students, faculty and alumni indeed took offense to the photo.

Ajay Williams, a FAMU alum, said on an episode of his “Crown Conversations” podcast that if he, as a black man, had taken a similar photo, “they would have been on my a** that day.”

“Clout and attention are a hell of a drug,” Williams told The Shade Room. “When you get to FAMU or any HBCU, the first thing they tell you is you are now a representative of the college or university. Her her doing that totally goes against what we know.”

Another FAMU graduate, Ashi Doss, told The Shade Room that it “went beyond women’s empowerment.”

“What is it that you want to represent?” she said. “If you took the photo because you were so proud to be a graduate of FAMU, then that’s what the photo should have been about. Not about you or your body.”

For her part, Williams says she’s open to all criticism, but added she was grateful for the people who are supporting her, of which there are plenty. One woman posted on Twitter that “maybe (she’s) just an extreme feminist but I think ole girl from FAMU until that shoot up.”

An investigation into the photo remains ongoing as of Wednesday.

What do you say, Roomies? Is the picture disrespectful, or not?