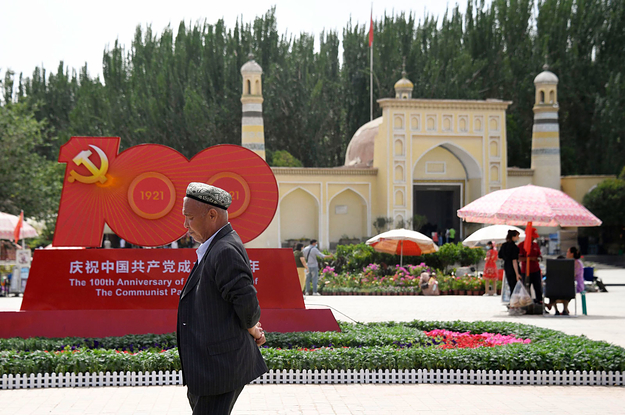 Abduweli Ayup has not been back to Kashgar since 2015, and his chances of doing so anytime soon seem slim. The Chinese government has canceled his passport, he said.

Sometimes he watches videos on YouTube of his hometown. They don’t make him feel better. It feels compulsive, he said, “like eating bad food.”

“You know, you want to keep eating it, but afterward your stomach feels upset,” he added. As he watched one video while speaking with a BuzzFeed News reporter, Ayupi pointed to a giant sculpture of a traditional stringed instrument by the gates of the city. “See that, that’s just for tourists,” he said.

The city is now full of these sorts of photogenic additions. There are giant teapots at the main junction near the city gate. Elsewhere, murals show maps of Xinjiang or carry slogans such as “Xinjiang Impressions” where visitors stop to take holiday snaps. A new entrance has been added to the metalwork market, with a large sign featuring silhouetted hammering iron figures. The anvil statue at the corner now comes with projection-mapped fire, as well as sparks and a piped soundtrack of metal being struck. Camel rides are available too.

In the videos he has seen, Ayup has also noticed footage of people dancing while wearing traditional Uyghur dress — customs that they might have worn more than a century ago. Figures like these can be seen on Chinese state television and at the country’s annual rubber-stamp parliamentary session. “Nobody would wear that clothing anymore unless it was for show,” Ayup said.

Tourism is now booming in Xinjiang. Last year, even as global numbers fell as a consequence of the pandemic, 190 million tourists visited the region — more than a 20% increase from the previous year. Revenue increased by 43%. As part of its “Xinjiang is a wonderful land” campaign, the Chinese government has produced English language videos and held events to promote a vision of the region as peaceful, newly prosperous, and full of dramatic landscapes and rich culture.

Chinese state media has portrayed this as an economic growth engine for Xinjiang natives, too. One article described how a former camp detainee named Aliye Ablimit had, upon her release, received hospitality training. “After graduation, I became a tour guide for Kashgar Ancient City,” Ablimit said, according to the article. “And later, I turned my home into a Bed and Breakfast. Tourists love my house very much because of its Uygur style. All the rooms are fully booked these days. Now I have a monthly income of about 50,000 yuan,” or about $7,475.

The facade holds up less well with Kashgar’s mosques. Many of the smaller neighborhood mosques appear to be out of use, their wooden doors damaged and padlocked shut — and others have been demolished completely or converted to other uses, including cafes and public toilets.

The mosque’s imam, Mamat Juma, acknowledged as much in an interview with a vlogger who often produces videos that support Chinese government narratives, posted in April 2021. Speaking through a translator, he is at pains to point out that not all Uyghurs are Muslims and to diminish the role of the religion in Uyghur culture. “I really worry that the number of believers will decrease,” he said, “but that shouldn’t be a reason to force them to pray here.” ●