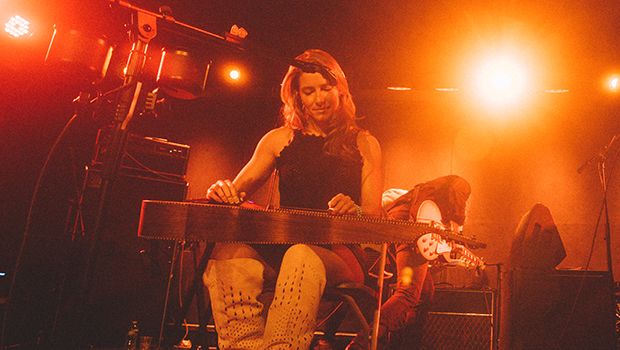 Caroline Jones has an impressive range of inspirations who she’s worked with firsthand that have helped influence her musical sound through the years, from Jimmy Buffett to Kenny Chesney to Zac Brown Band. There are island vibes, country notes, and hints of rock and roll that all come together with Caroline’s unique personal touches to create her library of impressive and ever-evolving music. Most recently, the antipodes singer has kicked off her own That Girl In The Band tour in between performing massive stadium dates with Zac Brown Band, and revealed to HollywoodLife in an EXCLUSIVE interview how being that girl in the band has influenced her new music.

“I’ve always had a multitude of influences. I love rock, I love pop music, I love country. I would consider myself primarily country pop, but with the Zac Brown Band, I’ve also got a lot more rock in my bones,” she told HL ahead of her Citi Field performance with the group. “They just rock so hard, and playing live with them has emboldened me to be more raw, in that way, musically. So, I think that is an influence that you will see in the next project.”

She went on to gush over the Grammy Award-winning band, adding that the “Same Boat” crooners are all like her “older brothers now.” “I was so intimidated at the beginning!” she laughed. “I’m just so grateful to be here with them.”

Caroline admitted she still ‘doesn’t know’ what story her next album will tell, after her 2021 antipodes detailed her love story with her now-husband, and was an ode to New Zealand, where she spent most of the COVID-19 lockdown. “I’m excited to see the new influences that are coming into my music, but I don’t really know thematically exactly where it will land on the next batch of songs,” she explained. “I did release a song earlier this year called ‘Being A Woman Is Like Being The Sun,’ and it’s a bluegrass song that I released with an all female bluegrass band, so I’ve been on a little bit of a bluegrass kick! ”

Caroline was joined by GRAMMY Award-winning artist Alison Brown (producer/banjo), Rebecca Frazier (guitar/vocals), Kate Lee O’Connor (fiddle/harmony vocal), Mary Meyer (mandolin), and Missy Raines (bass) on the single that was released prior to Mother’s Day this past May. “It’s a metaphor for the blessings and the curses of being a woman, do you know? There are so many amazing things about it, and there are so many challenging things about it,” Caroline revealed. “I feel that as I get older and step into this new chapter of my womanhood, those challenges and those gifts become more and more clear.”

Devon Walker: 5 Things To Know About One Of SNL’s Newest Cast Members