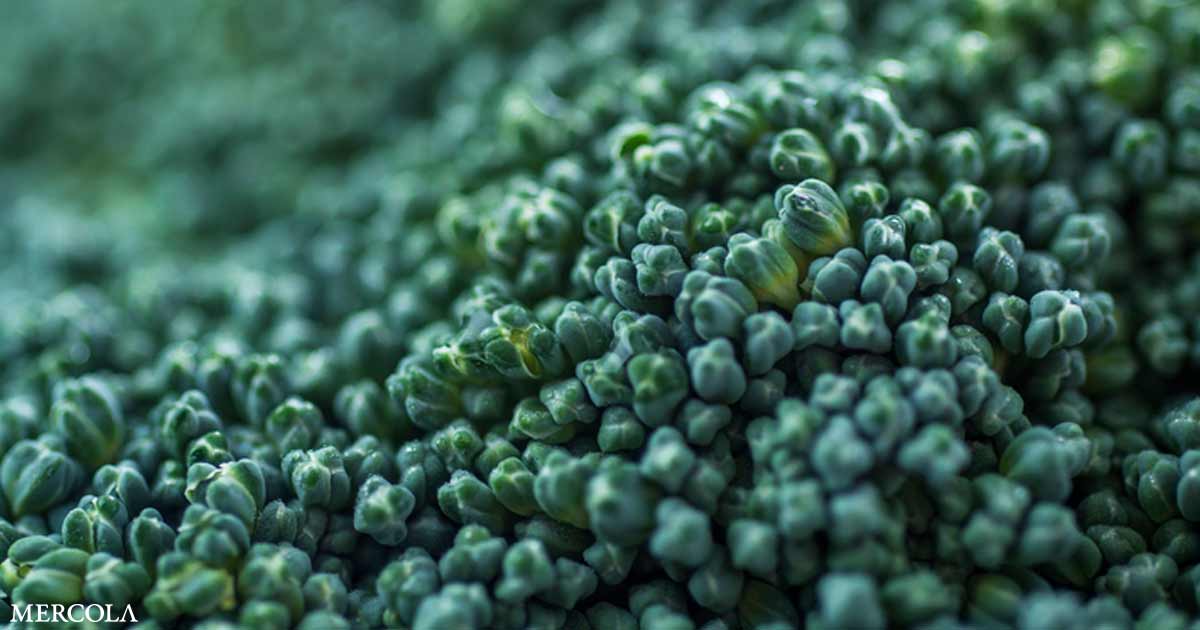 One of the most well-known of these is sulforaphane, an organic sulfur. Studies have shown sulforaphane supports normal cell function and division while causing apoptosis (programmed cell death) in colon,1 liver,two prostate,3 breast4 and tobacco-induced lung cancer.5 Just three servings of broccoli per week may reduce a man’s risk of prostate cancer by more than 60%.6

Another important phytochemical found in cruciferous veggies is indole-3 carbinol (I3C),7 which in your gut is converted into diindolylmethane (DIM). DIM in turn boosts immune function and, like sulforaphane, plays a role in the prevention and treatment of cancer.8,9

Interestingly, researchers now believe that DIM may be a potent weapon against antibiotic-resistant pathogens as well.10,11 Israel21c.org reports:12

“A phytochemical derived from cruciferous vegetables, such as broccoli, breaks down the biofilm that lets bacteria resist antibiotics, according to a study from Ben-Gurion University in Israel … The paper,13 co-authored by researchers from Near East University and Girne American University in Cyprus, was published in the journal Pharmaceutics.

The scientists found that phytochemical 3,3′-diindolylmethane (DIM) successfully broke down the biofilms protecting pathogens including Acinetobacter baumannii and Pseudomonas aeruginosa 65% and 70% of the time, respectively…

When the team introduced DIM into an infected wound, it sped up the healing process significantly. ‘Our findings show promise for other avenues of research in addition to known classes of antibiotics,’ said [professor Ariel] Kushmaro.”

Antibiotic Resistance Is a Serious Problem

This could potentially be the breakthrough we’ve been searching for. Antimicrobial resistance has been on the rise for decades, thus making infections that were previously easy to treat a serious threat again. According to the World Health Organization, antimicrobial resistance is “one of the top 10 global public health threats facing humanity,”14 and the primary cause for this man-made epidemic is the widespread misuse of antibiotics.

Antibiotic overuse occurs not just in human medicine, but also in food production. In fact, agricultural uses account for about 80% of all antibiotic use in the US,15 so it’s a major source of human antibiotic consumption.

Animals are often fed antibiotics at low doses for disease prevention and growth promotion, and those antibiotics are transferred to you via meat and other animal products, and even via the manure used as crop fertilizer.

DIM was able to inhibit biofilm formation in Acinetobacter baumannii and Pseudomonas aeruginosa by 65% ​​to 70% respectively. When DIM was combined with the antibiotic tobramycin, biofilm growth of P. aeruginosa was diminished by 98%.

Many pathogens have also developed resistance to more than one drug, so-called pan-resistance, which makes treating them even more problematic. And, while pan-resistant superbugs are increasing, the development of new antibiotics to tackle them has come to a near halt. According to the WHO:16

“In 2019 WHO identified 32 antibiotics in clinical development that address the WHO list of priority pathogens, of which only six were classified as innovative. Furthermore, the lack of access to quality antimicrobials remains a major issue. Antibiotic shortages are affecting countries of all levels of development and especially in health care systems.

Antibiotics are becoming increasingly ineffective as drug-resistance spreads globally leading to more difficult to treat infections and death. New antibacterials are urgently needed — for example, to treat carbapenem-resistant gram-negative bacterial infections as identified in the WHO priority pathogen list.

However, if people do not change the way antibiotics are used now, these new antibiotics will suffer the same fate as the current ones and become ineffective.”

The four pathogenic bacteria investigated in the study17 cited above — Pseudomonas aeruginosa, Acinetobacter baumannii, Serratia marcescens and Providencia stuartii — are all gram-negative bacteria, and in the initial investigation, DIM reduced biofilm formation in all four by as much as 80%.

Of these, Pseudomonas aeruginosa and Acinetobacter baumannii are both resistant to multiple drugs, so in follow-up tests they focused on these two specifically. As previously noted, DIM was able to inhibit biofilm formation in these bacteria by 65% ​​to 70%. When DIM was combined with the antibiotic tobramycin, biofilm growth of P. aeruginosa was diminished by 98%.

Nonhealing wounds are often infected with pan-resistant bacteria, and it’s the biofilm that prevents the tissues from healing back together. To test whether DIM could work topically in these scenarios, the researchers infected puncture wounds on pigs with P. aeruginosa, and then applied a cream containing either DIM alone, the antibiotic gentamycin alone, or DIM plus gentamycin combined.

When to Use This Phytochemical

Just like high-dose vitamin C, which is another potent weapon to treat infections, especially when used IV, I don’t believe that DIM should be used every day as a prophylactic to prevent infections. It should be used only when needed to treat antibiotic resistant infections as it will likely do so without any of the side effects of potent antibacterials.

Other Health Benefits of Cruciferous Vegetables

While you may not be able to treat a pan-resistant infection with a few servings of broccoli, the fact that this food may offer a solution to the pressing problem of antibiotic-resistance is exciting, and just goes to show that nature has answers to many of our problems — including problems we’ve created ourselves.

That said, cruciferous veggies have many other health benefits that are worth taking note of, and which you can obtain simply by including more of them in your diet. In addition to its anticancer benefits, I3C — the precursor to antioxidant IM — is also a powerful, and can help balance both male and female hormones, thereby supporting reproductive health in both sexes.

In simple terms, DNA methylation21 is the process by which a methyl group (one carbon atom attached to three hydrogen atoms) is added to part of a DNA molecule. This is a crucial part of normal cell function as it allows cells to “remember who they are and where they have been.” DNA methylation also suppresses viral- and other disease-related gene expression.

Just realize that broccoli is not a “magic” bullet. In fact, some physicians, like Dr. Paul Saladino, present powerful arguments that nearly all vegetables are to be avoided (but not fruits). This is because the hormetic benefits from their phytochemicals can be obtained in other lifestyle measures.

The most important lifestyle measure would be to avoid all seed oils. If you only limited your diet changes to keep your seed oil less than 2% of your daily calories as confirmed by Cronometer, I strongly believe your health would improve exponentially more than regularly having the finest organic/biodynamic vegetables.

This is largely because excess LA (linoleic acid) is the most pernicious toxin in our food supply and is responsible for most all of our chronic diseases. Other lifestyle measures to improve your health would include exercise, regular sun exposure on bare skin, and sauna. Having said that, compounds found in broccoli and other cruciferous veggies have been shown to:

How to Optimize the Benefits of Broccoli

To get the most out of your broccoli, lightly steam it for three to four minutes until it’s tough-tender. Do not steam longer than five minutes. This will allow you to get the most bioavailable sulforaphane out of it. If you opt for boiling, blanch the broccoli in boiling water for no more than 20 to 30 seconds, then immerse it in cold water to stop the cooking process.

If you want to increase the sulforaphane content even further, pair broccoli and other cruciferous veggies with a myrosinase-containing food40 such as mustard seed,41 daikon radishes, wasabi, arugula or coleslaw. Of these, mustard seed is the most potent.

If you’re not a fan of mature cruciferous vegetables, then consider broccoli sprouts instead. They actually pack a greater punch in terms of nutrition, so you don’t have to eat as much. According to researchers at Johns Hopkins University, a mere 5 grams (0.17 ounces) of broccoli sprouts contain concentrations of the compound glucoraphanin equal to that found in 150 grams (5.2 ounces) of mature broccoli.42

Sprouts can also contain up to 100 times more enzymes than raw fruits and vegetables, allowing your body to extract more vitamins, minerals, amino acids and essential fats from the foods you eat. You can easily and inexpensively grow broccoli sprouts at home, indoors, and you don’t have to cook them. They are eaten raw, usually as an addition to salad or juice.